The Highlanders were staunch but ultimately beaten 23-15 by the Sharks in a tetchy, error-filled Super 14 rugby match at Durban this morning.

A spate of cards in the final five minutes were the biggest talking point of a match in which both sides scored two tries but which the fourth-placed Sharks should have won by more if their handling hadn't been so sloppy.

They certainly should have been further up than 17-15 at halftime, having blown a swag of scoring chances, and needed two penalties to halfback Rory Kockott to pull out of danger in the second half.

The game was scoreless over the final 25 minutes, leading to frustrations boiling over and South African referee Phillip Bosch reaching into his pocket for one red card and two yellows.

Kockott was the man sent from the field for a blatant left hook swipe at Adam Thomson, with the feisty No 9 not happy at the Highlanders flanker carrying on with a tackle.

Fullback Israel Dagg tried to earn his team a bonus point with a long range penalty from the latter offence in the final minute but missed.

"The Sharks set the scene in those first five minutes but the boys bounced back and it's a credit to them," he told Super Sport.

"It's southern mentality. We hang tough at tough times, but overall it's disappointing to come away with no points."

Sharks hoped his title contending team wouldn't go on to rue another missed bonus point with their rusty performance which came after the bye week.

"After a good break, we're happy with the four points but probably disappointed we played the way we did," he said.

"We created more opportunities than we did earlier in the season but our finishing has gone out the window."

Kockott opened the scoring with a 10th-minute penalty, the first of his 13-point haul with the boot as his team dominated the opening exchanges.

The visitors had the first try from a rare foray when the ball went through several pairs of hands and sent hooker Jason Rutledge over in the left corner.

The Sharks two tries came in a decisive 10-minute period midway through the half to lock Steven Sykes and flanker Jacques Botes.

The first was set up by exciting No 8 Ryan Kankowski, the most dangerous attacking figure in either side, while the second came from a pass dropped in-goal by Highlanders first five-eighth Matt Berquist.

He made some amends with a penalty and his team were right back in it on the halftime hooter as Cowan ducked between two tacklers to score.

The Highlanders bid farewell to South Africa when they play the Lions in Johannesburg next week while the Sharks host the New South Wales Waratahs in a crunch fixture in terms of playoff calculations. 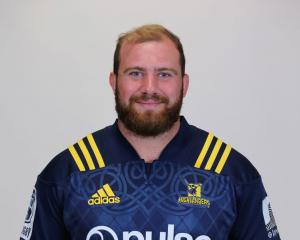