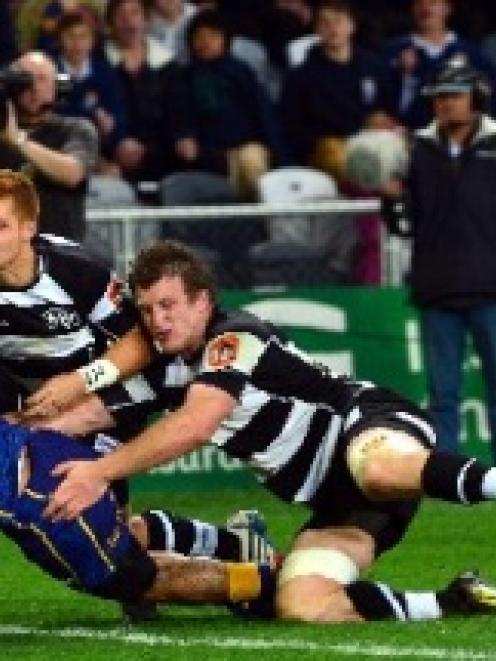 Otago outside back Buxton Popoali'i scores a try while held by Hawkes Bay players (from left) Ihaia West and Brendon O'Connor during the Ranfurly Shield defence at Forsyth Barr Stadium yesterday. Photo by Peter McIntosh.
This was an epic. The only problem was - and it was a major problem for Otago and its supporters - its ending was more Dead Man Walking than Chariots of Fire.

Hawkes Bay claimed the honours, and with it the Ranfurly Shield, with a 20-19 win over a gallant Otago side at Forsyth Barr Stadium in Dunedin yesterday.

It was a heck of a game, with a high level of intensity and players ran themselves to a standstill.

Otago started well, then conceded near on 20 points before making a furious late run which took the team within a cat's whisker of victory.

Winger Buxton Popoali'i scored a try with six minutes to go to get the side within one point but Hayden Parker missed the conversion.

The home side had a chance of victory right at the death but Parker's dropped goal was charged down and with it went Otago's hopes.

Parker said afterwards the side struggled for a fair part of the game to get field position and a bit of ball.

''But we managed with about 20 minutes to go to get our game going. We came close, but a few kicks probably cost us.

''We just struggled to get out of our half with our kicking game and they just kept trapping us down there and made it very difficult for us.''

Parker said the dropped goal at the end was more of a hit and hope as the side struggled to get organised.

The conversion which he missed at the end was when he was trying to straighten the kick.

''All the others I had missed I had pulled them the other way. I tried to put it the other way but it was not meant to be.''

Otago might have felt aggrieved with four minutes to go when Hawkes Bay prop Ben Franks found himself on the wrong side of the ruck and in the way of the ball, but referee Mike Fraser just awarded the home side a scrum.

Otago was in big trouble with just over a quarter of the match left, when Hawkes Bay first five-eighth Ihaia West made a scything break through the Otago backline and ran 60m to score behind the posts.

That gave his side an 11-point lead but Otago stood firm, and a great try, stemming from a strong Paul Grant break, helped his team back into the match.

He broke the Hawkes Bay defence and swatted away three defenders, before being lowered 5m short. Centre Jayden Spence picked the ball up to score.

Grant had a fine game for Otago, while lock Tom Franklin and prop Craig Millar got through plenty of work.

The first half was tighter than the wallet of a Reserve Bank governor.

There was plenty of probing and questions asked but neither team could put together a decisive blow.

Otago started well and Parker was over after just 12 minutes but it was ruled - correctly - he had used Otago players in front of him to clear his path.

Parker slotted a couple of penalties within the first quarter of an hour and Otago had the lion's share of territory.

But the visitors started to get more of the ball and got their first points with a West penalty on the half-hour mark.

Straight from the restart, Hawkes Bay scored the only try of the first 40 minutes.

It broke through Otago's defence and put discarded Highlander Telusa Veainu over, after clever work inside him.

West converted from the sideline.

Parker though hit straight back for Otago as he added a third penalty, from the kickoff as Hawkes Bay got offside.

West replied with a penalty just before the halftime whistle as Otago conceded right under its posts.

• Wellington is going to have to stop making life so tough on itself when it finally comes up against some of the heavy-hitters in the ITM Cup this season, APNZ reports.

After cruising past Counties-Manukau and Taranaki in its first two outings, Wellington stumbled to two wins this week over Championship opposition.

It held off North Harbour 35-27 on Wednesday night and was made to work for a 42-15 win over Manawatu at the Cake Tin yesterday.