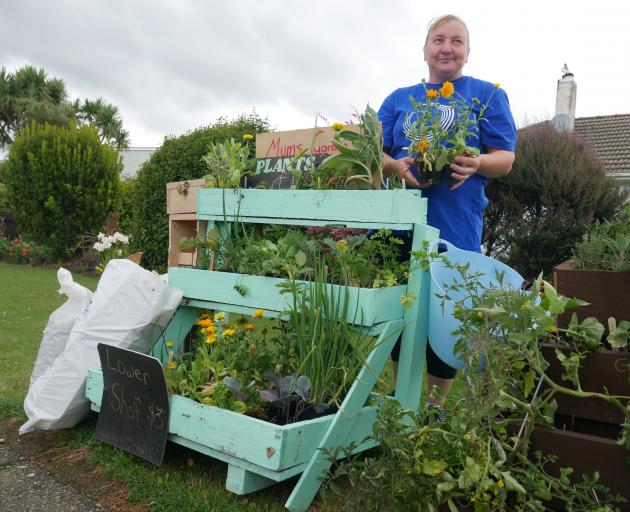 Mosgiel resident Rosanne Dee sells affordable, home-grown flowers and produce outside her home in Murray St. PHOTO: JESSICA WILSON
Taieri Times is recognising people for the good they do in the community. In "Top Types" we are celebrating these people. This week, Jessica Wilson talks to self-taught gardener Rosanne Dee.

A Mosgiel woman is hoping to grow her hobby into a career.

When Rosanne Dee had too many flowers for her garden last summer, she put them outside her house for people in the neighbourhood to buy.

"I’ve been really surprised at how many people keep coming.

"Lately the usual thing happened, everything comes ready in the garden at once and I’ve had too much for us."

Ms Dee sells the flowers and produce cheap, mostly just to cover the cost of the seeds.

She knows how important affordable produce is for people on the benefit or students with a low income.

The price also reflects her ability as she is self-taught, she said.

As well as flowers, she sells fruit and vegetables, which have become a favourite among her neighbours.

The stall had become so well known that members of the community started to drop things off too, like vegetables and eggs.

After studying for a Certificate in Health and Wellbeing at Otago Polytechnic last year with the aim of working in the social services, Ms Dee opted to go down a different path this year.

She has enrolled for the polytechnic’s horticulture course to give her extra knowledge about plants.

"I wanted to go into the social work but I decided to go into horticulture because it’s something I really, really enjoy."

She wanted to educate people on how to grow their own food and planned to share her knowledge on social media.