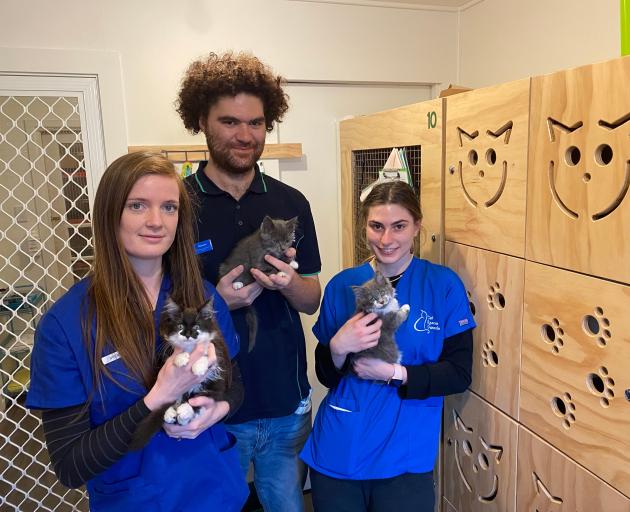 Enjoying some fluffy kitten cuddles in the midst of chaos at Cat Rescue Dunedin are (from left) resident vet nurse Brenna Gould, and volunteer Otago Polytechnic students Damian Bennett (studying for NZ certificate in animal care) and Caitlin Rolfe (studying for diploma in vet nursing). PHOTO: BRENDA HARWOOD
The cats are stacked up in the hall and the office at Cat Rescue Dunedin’s Caversham intake centre, as the organisation battles a "tsunami of cats and kittens".

Cat Rescue Dunedin board of trustees chairwoman Debby Foster said the number of cats and kittens flooding into the rescue was worryingly high this year.

Concerningly, the numbers of cats and kittens rescued so far this year stands at 468, including 400 kittens.

"It’s absolutely huge, we are facing a tsunami of cats and kittens, and it is really stretching our resources and our facilities to the limit," Mrs Foster said.

"Fortunately, there are still people out there looking to adopt, particularly kittens, which helps to alleviate some of the pressure."

The Cat Rescue Dunedin intake centre in Caversham was originally set up to hold 15 cats before they went out to foster carers, but this was difficult if they came in sick.

"We are working around it as best we can, but we are bursting at the seams at the moment."

There were a number of possible factors behind the high numbers of stray and dumped cats and kittens this year — a nationwide trend that was affecting rescues throughout the country, Mrs Foster said.

The temporary closure of vet clinics during Covid-19 lockdowns and the subsequent drop in the amount of desexing among cats was one possible factor.

Another was the "incredibly hard times" being faced by many families, who found themselves unable to afford to keep their pets.

"Something we are noticing, which is very sad, is the amount of friendly cats and kittens being dumped in the countryside.

"Obviously, they have been someone’s pet."

Another distressing situation that arose for pet owners in rental accommodation was having to move and being forced to give up their much-loved animals.
"With the rental market so tight, people aren’t able to take the time to look around and find somewhere that they can take their pet.

"That’s very sad — we have had people in here sobbing because they are having to surrender their pets."

In previous years, Cat Rescue Dunedin had worked to help people manage colonies of cats in different parts of the city, but lately had not had the space or the resources.

Cat Rescue Dunedin has a dedicated team of fosterers across Dunedin, including students, helping to provide shelter and socialisation for cats and kittens.

"We are very lucky to have that support in the community," Mrs Foster said.

At present, the rescue is in urgent need of volunteers to help with fundraising, as well as volunteers able to help transport cats to veterinary appointments.