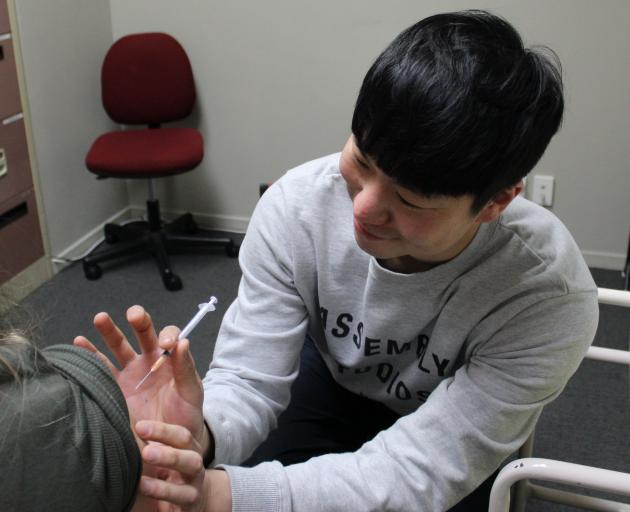 Pharmacist Joshua Yu gives a Covid-19 Pfizer-BioNTech vaccine to a volunteer at Servants Health Centre.PHOTO: SIMON HENDERSON
As Covid-19 vaccinations start rolling out to members of the general population, a local organisation is working hard to ensure some of the most vulnerable people in Dunedin have the opportunity to get the jab.

Clinical leader Beth Stitely said although the vaccine was being offered elsewhere it was important for their patients to feel safe, and going to a familiar location could be the difference between getting vaccinated or not.

"We felt that having it here, with staff that they are familiar with, with a friendly environment, they would be more likely to get the jab."

Pharmacists and retired general practitioners had volunteered to administer the vaccine and medical students were helping with the administration of the clinic.

"A lot of the medical students have stepped up to help."

The centre had about 375 patients enrolled and some had complex health needs with challenges including mental health, homelessness and poverty.

Some homeless patients were referred to the clinic by the Dunedin Night Shelter.

"If we had to say to her we need to refer you to another GP to have your jab, she just wouldn't turn up."

However because she was familiar with Servants Health Centre and had been there before she was willing to be vaccinated.

The aim was to make sure no-one was left behind, in particular those who were "completely under the radar," Ms Edwards said.

People who were homeless or living in boarding houses lived very isolated lives.

The health centre was helping educate people who had incorrect information about vaccines, Mrs Stitely said.

"It is important to us our patients have the information they need to make the right choice.

"We are not forcing the vaccine on anybody, it is their choice, but we want them to have the right information."