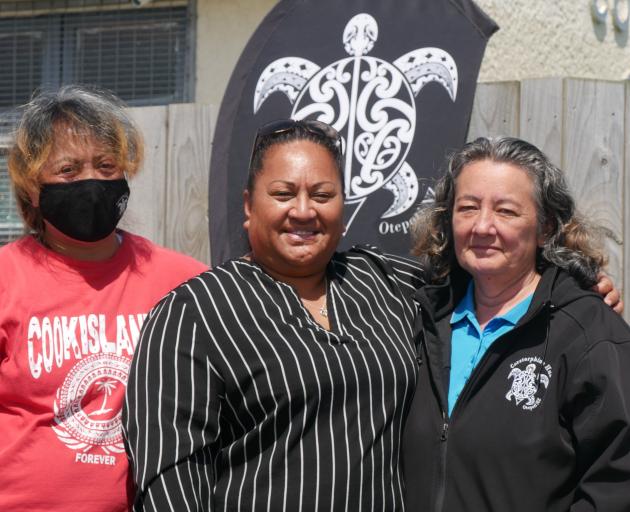 Corstorphine Community Hub members (from left) groundswoman Moana Taana, chairwoman Mama Taana and co-ordinator Dale Pene-Smith are hoping to use a Dunedin City Council place-based funding grant to host community events. PHOTO: JESSICA WILSON
The Dunedin City Council grants subcommittee recently allocated $400,000 to seven place-based community groups across the city. The grants, which range from $13,000 to $63,000, will be used to help with building community connection and resilience  over the next 12 months. The Star continues its series on the city’s place-based organisations this week by highlighting the work of the Corstorphine Community Hub. Jessica Wilson reports.

Bringing the community together is a main focus at the Corstorphine Community Hub.

Located in Middleton Rd, the hub was launched in 2013 in response to the closure of Corstorphine School in 2010.

It recently received $60,000 from the Dunedin City Council to assist with wages and hosting community events, pending Covid-19 restrictions.

Hub chairwoman Mama Taana said she hoped to hold events ‘‘where we can bring people together’’.

That could include things such as family barbecues, a trip to the movies or fun activities for children.

Some families had struggled during the Covid-19 lockdown and subsequent restrictions, so hosting activities was a way to let them know they were doing well, Ms Taana said.

‘‘With everything they’ve had to deal with in the past few years, this is our way of giving back to them to say thank you for what they have had to put up with.’’

The work of hub members included preparing a shared lunch for the community on Thursdays, which they had been doing for nearly nine years.

It was a chance for people to share food, relax and talk to other members of the community, she said.

‘‘You sit with the kai and everyone opens up.

‘‘We have some elderlies who sit at home by themselves and have no-one else to talk to, so they come here and sit with us.

‘‘They talk to somebody or play with the wee ones.’’

The hub received a place-based funding grant last round, which was also used for community events, including its Christmas party.

‘‘We do a massive Christmas event — it’s our biggest one that we do every year.’’

Hub members also worked alongside KiwiHarvest to distribute food parcels to families and with community advocate Ana Mapusua to give out shoe boxes of presents to children.

‘‘We do a Christmas event every year, but this will be the third year that we do the shoe box appeal.’’