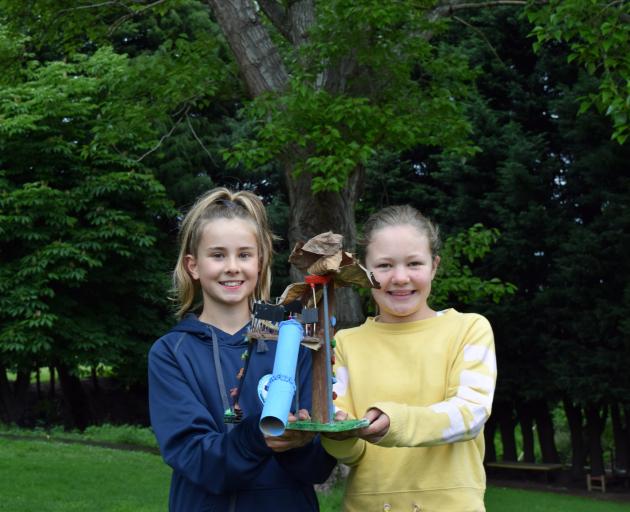 Balaclava School pupils Bonnie Wilson (left) and Gretel Calvert (both 11) display a model of a treehouse they designed for their school. The planned host tree is straight behind them. PHOTO: SHAWN MCAVINUE
A nearly $50,000 treehouse designed by two Dunedin pupils is set to become a reality.

Balaclava School pupils Bonnie Wilson and Gretel Calvert have been meeting engineers to tweak their design of a treehouse set to be built in the school grounds.

The treehouse the year 6 pupils designed features a tube slide, a climbing wall, a fireman’s pole and a large game of noughts and crosses.

The building of the treehouse was expected to begin next week.

School principal Gary Marsh said every pupil accepted his challenge to design a piece of children’s play equipment which they believed the school was lacking.

The school’s senior leadership team, including himself, were given the designs — but not the names of the pupils behind them — and were asked to choose a winner.

"It was not an easy job because they were all pretty special."

The team picked the treehouse because of its features and how it utilised a mature tree in the forest area of school grounds, which the team had wanted to improve.

Bonnie said the tree was the "perfect" site to build the project.

Mr Marsh said an arborist had checked the tree and deemed it suitable to build the tree house.