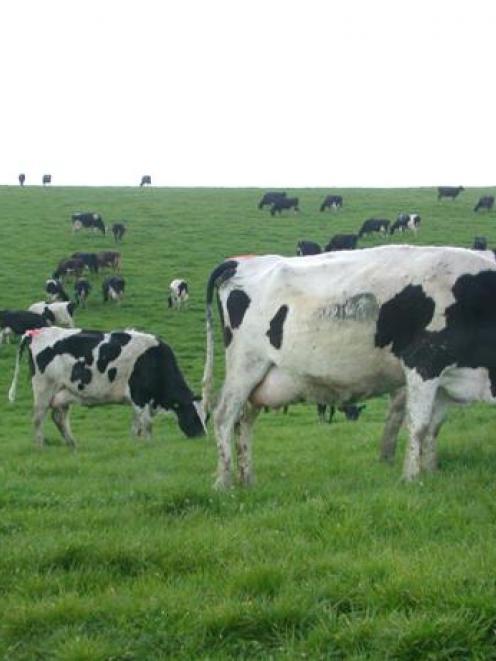 The increased payout forecast for Fonterra suppliers could mean an end to the recent price slump. Photo from <i>ODT</i> Files.
Fonterra farmers have received an early Christmas bonus - a 20c increase in the 2012 payout forecast.

That was a potential $300 million boost for the economy if the forecast stuck, Federated Farmers national dairy chairman Willy Leferink said.

"It's not a Christmas gift yet because there's a lot of milk still to go into our vats, but if it does hold up, it represents a big boost for every New Zealander and the taxman. It also provides additional resources for farmers to invest back into the farm environment," he said.

The forecast range of $6.90-$7 for a "fully shared-up" farmer reflected a "modest recovery" in global dairy commodity prices over the past two months, chairman Sir Henry van der Heyden said.

The revised forecast, announced yesterday, comprised a farm-gate milk price of $6.50/kg ms, up from $6.30/kg ms, and an unchanged distributable profit forecast range of 40c-50c per share.

Prices had edged up in three of the last four fortnightly auctions on the online trading platform GlobalDairyTrade. The GDT trade-weighted index was now 5.8% above its recent low in early October.

While foreign exchange volatility remained, the impact on the Fonterra farm-gate milk price became less further into the season as the proportion of foreign exchange hedging increased, he said.

Otago Federated Farmers president and Taieri dairy farmer Mike Lord said the forecast was "very pleasing". He hoped the recent improvements in GlobalDairyTrade meant the price slump had been arrested.

Otago Federated Farmers dairy chairman David Wilson, who said it should be noted that it was only a forecast at this stage, was surprised at the rise.

It reflected the slight rise in commodity prices in the last couple of months and was good news.

In October, Fonterra dropped its milk payout forecast for the 2011-12 season by 45c, blaming a continued softness in commodity prices and a stronger New Zealand dollar.

Yesterday, the dairy co-operative also announced the estimated fair value share price for the next season was $4.52 per share, the same as the current season's price.

Independent valuer Grant Samuel estimated a restricted market value range for Fonterra shares with a mid-point of $4.26 per share as at 1 June 2012, the start date of the 2013 season.

The estimate was 2%, or 8c per share, higher than the valuation for the current 2012 season.

As the mid-point of the valuer's estimated range remained below the current base price of $4.52 that applied during the transition to a restricted market value, the Fonterra board had determined the estimate for the co-operative share price for the 2013 season would remain at $4.52 per share.

The final share price for the 2013 season would be determined in late May next year, after the board received a final valuation from the valuer. The valuation increase per share primarily reflected the impact of retentions in further reducing Fonterra's overall debt levels, Sir Henry said.

"This is in line with the board's strategy to maintain a strong balance sheeting during these volatile and uncertain times. It also positions the co-op well going forward, as we invest to grow future farmer returns."

The valuation had been adversely affected by exchange rate movements since the previous valuation in May. In particular, a higher New Zealand dollar against many overseas currencies was eroding expected valuation gains for Fonterra's businesses and investments in Asia and South America.

The valuer stressed that the restricted market value was not an estimate of where Fonterra shares would trade immediately after trading among farmers commenced. Rather, it reflected the valuer's view on the likely long-run average discount to fair value, Sir Henry said.