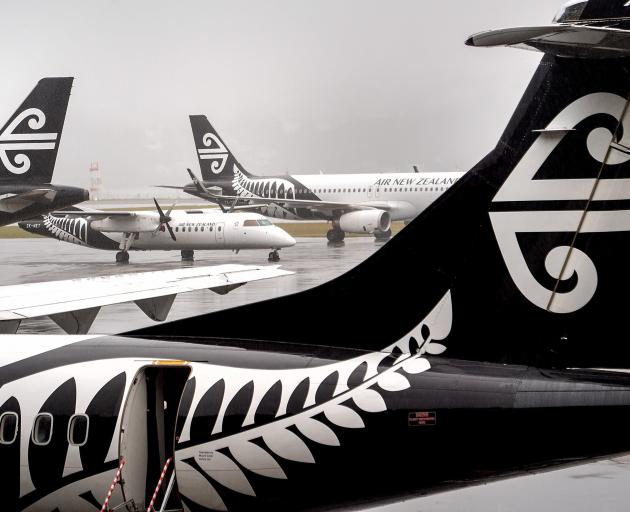 The profit plunge surprised analysts, who also identified increasing debt levels, and comes as a back-drop to rival Jetstar this week announcing it will beat any of Air New Zealand's new cut-rate domestic fares by 10%.

The national carrier's half-year "headwind" fuel costs hit $131million, compared with a $135million headwind for the whole of 2018.

Air New Zealand left its full-year earnings guidance unchanged yesterday, with pre-tax earnings in a range of $340million-$400million, which was downgraded in January from $425million to $525million, excluding an up to $40million impact from performance issues of its Rolls Royce engines.

Chief executive Christopher Luxon said based on current market conditions and assuming an average jet fuel price of $US75 ($NZ109) per barrel for second-half trading, 2019 earnings before taxation is expected in a range of $340million-$400million.

Air New Zealand shares, down more than 22% on a year ago, declined about 1% after the announcement to $2.53. The interim 11c dividend matched last year's.

For its six months to December, operating revenue was up 7.1% to $2.9billion, earnings before taxation were down 35% to $211million and after tax profit was down 34% to $152million.

Overall passengers carried rose 4.3% from 8.53million a year ago to 8.89million, the latter including a 3.4% increase in domestic numbers to 5.75million.

Aside from fuel costs up 38%, labour costs rose by 5.8% and aircraft operations, passenger services and maintenance costs rose by 13%: up by $83million to $698million.

Mr McIntyre said the 35% decline in before-tax earnings was because of softer passenger revenue than forecast, and higher operating costs, particularly labour costs; up $37million to $672million.

For Air New Zealand to maintain its full-year 22c dividend, Mr McIntyre said it was likely to adjust network capacity and focus on cost reductions where possible.

"Revenue growth of 7% [to $2.92billion] was robust, but slowed through December, particularly for domestic," she said.

Both brokers noted debt gearing at 56.4% was above management's target band of 45%-55%, which the company would want to reduce, likely through the review of its network, fleet and cost base which was already under way.

Mr Luxon said the rate of growth in the New Zealand market was slowing from previous years to be more in line with other developed markets.

"The airline will be reviewing its network, fleet and cost base to reflect the new environment," he said, and an update was expected by the end of March.

"While we continue to expect solid growth across our key markets including domestic New Zealand, we cannot ignore signals that the rate of growth has slowed somewhat from prior years," Mr Luxon said.

Earlier this week, Air New Zealand announced cheaper fares were on the way on more than 40 domestic routes, and 750,000 seats a year would be on sale for less than $50.

The total $179million fuel cost was only partially offset by fuel hedging gains of $15million, taking the cost to $131million, while the weaker New Zealand dollar impacted fuel costs by $40million.