MapQuest has Google Maps in its sights 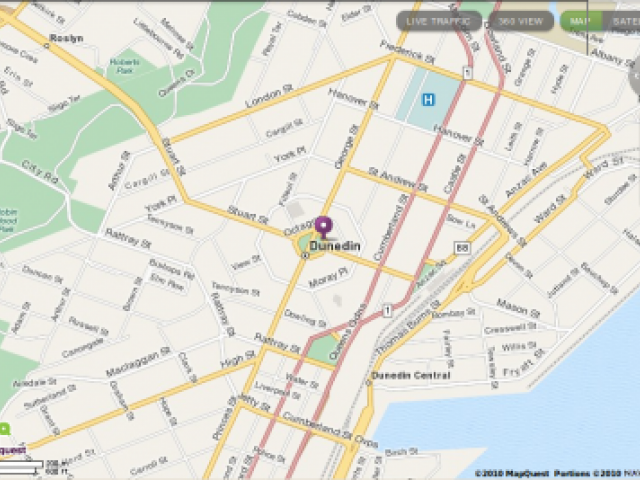 A map of central Dunedin from MapQuest.

MapQuest was long the leader among websites giving people online directions, but Google Maps surpassed it in 2008.

MapQuest wants those eyeballs back.

This week,  the Denver-based mapping unit of AOL has started  is testing a fresh look with features that some might say make it look a whole lot more like, well, Google Maps.

The beta version scraps MapQuest's red logo in squiggly writing that general manager Christian Dwyer calls "cheap hotel" font. In its place is a simple font in shades of green and purple.

Instead of scrolling down to see a map, visitors see a map right away on the right side of the screen. There's also a single box for typing in searches instead of several.

Once a route is mapped out, a toolbar at the top of the map allows you to search for shops, parks, gas stations or other spots along the way.

"It's allowing it to be a place of discovery, rather than just a calculator," said Dwyer, who likened the new version to a "digital concierge." It's meant to be a simpler, more elegant, faster, more intuitive version that offers more information to plan a trip, Dwyer said.

Visitors can see the new version by going to http://new.mapquest.com if they don't see it right away.

For New Zealand users, many of the bells and whistles are unavailable but it acts as a perfectly servicable street map.

If all goes well, the beta could be the default look of MapQuest in August, though users can still opt to use the older version.

Boosting traffic is critical for AOL. The company's  revenue in the first three months of the year was down 23 percent from a year ago to $664 million, while rivals Google and Yahoo reported increases.

Part of Google's catapulting over MapQuest may be due to links to Google Maps often appearing at the top of search results for locations.

In fact, a Google search for "MapQuest" pulls up a link to MapQuest.com, right next to a map of its Denver headquarters provided not by MapQuest but by Google Maps.

The average MapQuest user visits the site about twice a month, Dwyer said. He would like to see their return visits double.

"Moving the frequency needle, that would be the ultimate goal. And getting new users," Dwyer said.