TracPlus takes off round globe 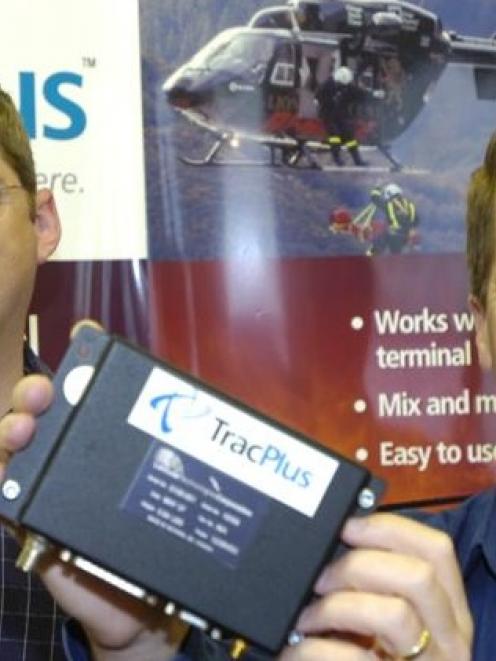 TracPlus US president Harlan Hamlin (left), holds a TracPlus antenna, and chief executive Chris Hinch, shows off a transceiver, in Dunedin. The New Zealand technology is bound for a record attempt on a round-the-world helicopter flight in July. Photo by Peter McIntosh.
A United States man's bid to break the round-the-world helicopter flight record will be tracked and assisted by Dunedin-based GPS company TracPlus, which is setting up a permanent office and control centre in Atlanta, Georgia.

TracPlus supplies hardware and software for the aviation, transport, maritime and search and rescue organisations in 12 countries and will be tracking Scott Kasprowicz's progress with a co-pilot, beginning in July.

TracPlus chief executive Chris Hinch said Mr Kasprowicz was attempting to break the existing record of about 21 days by flying the 20,000 nautical miles in about 14 days in an unmodified twin-engined Italian-made Agusta Westland Grand helicopter.

"For 24 hours a day, every week, we'll be not only tracking the helicopter but supplying meteorological updates, logistical information on all the fuel and food stops plus data to filmmakers and all the relevant rescue authorities across several countries," Mr Hinch said.

The proposed route is from New York, over Greenland to the United Kingdom, Italy and Europe to Russia, across the Bering Sea to Alaska and back to New York - without landing within the Arctic Circle - which is expected to need four to six stops per day in 300-nautical-mile legs.

Mr Hinch, who described Mr Kasprowicz as a former IT dot-com millionaire in the mould of adventurers Steve Fossett and Richard Branson, said the Agusta helicopter was flown from Italy to the US, instead of delivery by ship, by Mr Kasprowicz.

Late last month, Mr Kasprowicz had an aviation record ratified for a helicopter flight from New York to Los Angeles in 14 hours and nine minutes.

Mr Hinch said the US market had large potential for TracPlus, which could deliver a wide variety of different information to suit individual clients while providing real-time tracking.

An individual vehicle could be fitted with TracPlus hardware and software in New Zealand for less than $2500, or fleets of ships, planes or trucks could be tracked around the world with TracPlus and integrated into any existing hardware or software systems used by the companies.

Visiting Dunedin this week, TracPlus US president Harlan Hamlin said the US and Canadian markets had a range of potential applications for TracPlus.

"Both Canada and the US already have an understanding and need for new tracking services, and have the technology in place," Mr Harlan said.

TracPlus was recently chosen as a finalist to vie for a UK business passport to gain a subsidised year-long beach-head office in Wales.