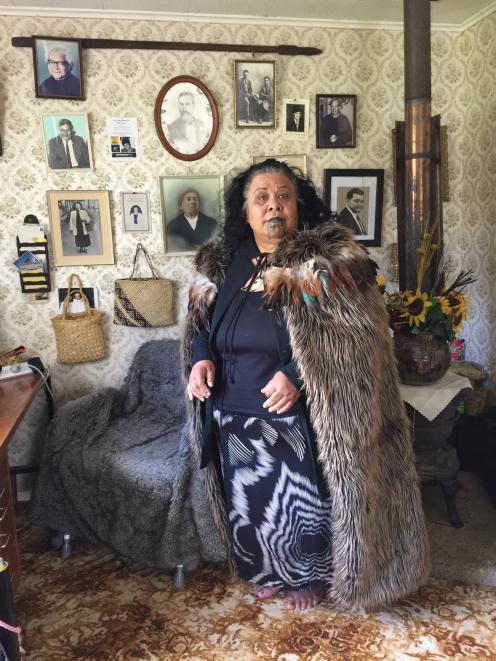 Erihi. PHOTO: SARA MCINTYRE
Nurse and photographer Sara McIntyre talks to Joanna Mathers about the inspiration behind a  tribute to small town Aotearoa.

Mist hangs low in Kakahi, enveloping a rumpled house. The red-brown walls are licked by lichen, paint aged and peeling, revealing the weatherboard beneath. On the porch, four rumpty chairs rest companionably. When the weather’s warm you can picture family gathering, perhaps watching the sparse play of traffic along the rural road.

Sara McIntyre, nurse and photographer, is charmed by Mrs Ruruku’s house. She’d photographed it many times before, but on a certain morning in 2015, the cold and light conspired to create magic. She swerved off the road rapidly, her car tyres screeching as she came to a halt. She reached for her iPhone and started snapping.

A nurse colleague of McIntyre’s is travelling across a nearby bridge in the opposite direction. She spies McIntyre and later tells workmates she’s going to be late: "She’s taking photos again".

The daughter of celebrated New Zealand artist Peter McIntyre has created a photographic book, Observations of a Rural Nurse, a personal account of her connection with the town of Kakahi, its people and the land.

It’s a delectable slab of New Zealand creativity, sensual in the way of the best art books. The photo of Mrs Ruruku’s house features as a double-page spread, a brooding slice of New Zealand gothic.

What started as an Instagram account detailing her daily life as a nurse in and around Kakahi has turned into a phenomenon. The images, infused with King Country light, act as a paean to a place immortalised nearly 50 years earlier by her father in his book, Kakahi New Zealand.

McIntyre’s first encounter with Kakahi was as a 9-year-old, when her parents took their family to the village for a trout fishing trip to the Whakapapa River. So enamoured were they of the region that Peter and Patti McIntyre bought a section by the river. Peter eventually designed and built a house there.

It would be a place the family returned to again and again. When her parents passed away, the home and the 8ha section stayed in the family.

McIntyre now lives in what was an abandoned house next to the family home. It sits on a cliff overlooking the river and undulating hills, the views shifting as the seasons change. We speak on a "bleak and rainy" morning: "I’ve got the fire on," she says.

She loves the seasons here. Unlike Wellington, which "just has wind", the King Country has seasons. The autumnal leaves change colour, she wakes to frosty, misty mornings in winter — gorgeous photographic fodder.

"The light here is very unique. We are quite high up and it’s very clean," she says.

McIntyre moved to Kakahi permanently in 2010, after working for many years in neonatal intensive care at Wellington Hospital. It was meant to be a six-month stint but the place felt like home, so she ended up staying, finding work as a district nurse. The locals were delighted to have a McIntyre back in the village.

"The country has forgotten Peter McIntyre a bit but he still means a lot to people here," she says.

Many of those featured in his 1973 book have friends featured in Observations of a Rural Nurse.

One of these is Shane, pictured by his clothesline. He knew McIntyre as "the district nurse" and was telling her about an earlier book about Kakahi while she took his picture.

"Oh my God!" he exclaimed when it was revealed that Peter was her father.

"I’m going to be in a McIntyre book, just like my cousins!"

Observations of a Rural Nurse, like the district itself, is populated with characters. Fierce Erihi in her korowai; Rowena, the wiccan pirate who lives in a shanty town of caravans and tarpaulins. Alan Taumata, one of Kakahi’s spiritual leaders, who tends both the wharekai and the St Peter’s Catholic Church nearby.

While she was initially nervous about asking the people she had met while nursing if she could take their photos, the response was overwhelmingly positive. And it’s allowed them to open up, movingly, about their lives.

"Erihi and the Te Akau whanau have memorial walls of loved ones who have passed, which are featured in the book. Both spoke of each person featured in these photographs with pride." — The New Zealand Herald