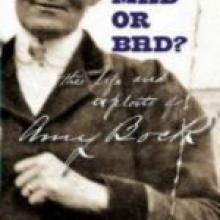 Much has been written over the years about Amy Bock, woman, who as Percival Leonard Carol Redwood, "bachelor", married Nessie Ottaway, woman, at Port Molyneux, South Otago, on April 21, 1909.

It was a magnificent occasion, attended by 100 or so guests.

This illegal act is what gained Bock the greatest degree of notoriety in later years.

But Bock's life from young womanhood until her death in 1943 at the age of 84 was a sorry succession of unlawful acts of false pretences, forgery, larceny, sharp practice, lies and deception of good-hearted people whose innocent trust she invariably betrayed.

Arrested after her marriage sham, Amy said: "I believe I could go from end to end of New Zealand and take down every nine persons out of 10."

Amy, around this time, had an ongoing internal battle with what she described as almost constant impulses to take things without paying for them.

At school, she was very talented but had a restlessness about her that was described as "exasperating".

Her career as a sole-charge teacher was marked by much deceit and various fraudulent actions.

Soon after her arrival in New Zealand in 1884, Amy embarked on what were to become a virtually endless succession of frauds, deceits, sharp practice and lies which by 1894, when she was released from Dunedin Jail, had earned her eight prison sentences served in as many years.

Amy, who continued to perpetrate illegal acts of deceit, was married in New Plymouth on November 16, 1914, to Carl (Charles) Edward Christofferson.

She slipped into almost total obscurity in the last 10 years of her life.

Detail is packed upon detail.

This surely will be the definitive biography of Amy to be read in future years.

Coleman writes: "Her intelligence, along with her well-educated and congenial manner, her ability to gain people's trust and manipulate their perceptions, and her consummate ability to tell convincing stories betrayed a supreme confidence in her own skills, and an undoubted pleasure in playing the confidence trickster's game."

The author asks: "So was she mad, bad, a pathological liar, a kleptomaniac or a lesbian?

If anything, an ability to adapt, to perform, and to rise above the mundane circumstances of daily life, whether in fantasy or in productive and artistic endeavour, was in Amy's blood."

Amy Bock was, and remains, Coleman says, "a bit of a hard case".

Quite so but a most annoying hard case.

Clarke Isaacs is a former chief of staff of the Otago Daily Times.