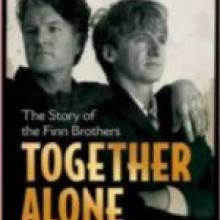 Geoffrey Barnett reviews Together Alone: The Story of the Finn Brothers

TOGETHER ALONE
The Story of the Finn Brothers
Jeff Apter
Heinemann, $42, pbk

I will always remember Split Enz for their marvellous music videos and great songwriting - and for performing so badly one night in a Sydney nightclub in 1979 that I walked out halfway through the show.

I also recall that few other members of the large audience shared my opinion and continued to cram themselves so tightly in front of the stage and all the exits that my friend and I were forced to make our escape through the toilet window.

I mention this incident because Jeff Apter devotes the prologue of his book to a description of possibly the same concert.

The Split Enz of 1979 may have turned me off, but they turned Apter into a life-long fan and eventual author of Together Alone.

He writes: "To me, the impact was as much physical as it was musical - and I had no doubt this band could play - as they caromed off each other like human pinballs . . .

"I went away duly impressed: I'd witnessed a freakshow and a frenetic display of muscle and musicianship."

Apter did not set out to write a history of Split Enz.

His intention, beautifully realised, was to detail the personal and professional relationship between the Finn brothers, Tim and Neil.

As a boy, Neil idolised his older brother and desperately wanted to follow in his footsteps.

The shift from adoring sibling to bandmate might seem an obvious one now, but it took a long time for Split Enz to realise that Neil's talent was just what the band needed at the time.

I was amused to read about Neil's period as a reluctant teen idol within the band, and how much it annoyed frontman and band leader Tim, who would sing his heart out to minimal applause and then have to put up with an explosion of screaming from teenage girls whenever Neil stepped up to the microphone.

However, it wasn't long before Tim went one step ahead of his brother, finding success as a solo performer in the early 1980s.

He seemed to have a glittering career ahead of him without the band or Neil, but it was not to be.

Post-Enz, it was tough on Tim when his sibling became hugely successful with his own band.

Tim later admitted: "I was happy when it wasn't going well [for Crowded House] and depressed when they got a hit."

But no matter how far and how often they drifted apart, they always reconciled, including in 1991 when Tim briefly joined Crowded House.

Many fans are grateful for that strong brotherly bond, believing the Finns' best music has always been made together, not alone.

Geoffrey Barnett is a Dunedin journalist.