Portrait of city best at depicting its people 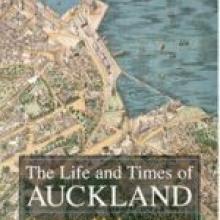 A colourful look at Auckland through the eyes of a fan.

THE LIFE AND TIMES OF AUCKLAND
Gordon McLauchlan
Penguin, pbk, $40

Born and reared in Dunedin, Gordon McLauchlan reveals himself as an enthusiastic Aucklander who looks with disdain on New Zealand south of the Bombay Hills.

Light on detail, his book is rich on the people who have been associated with the development of our largest metropolis.

From its founding by Governor Hobson, he shows that Auckland was different from the Wakefield-class settlements and used its prime position to progress, despite the loss of capital status to Wellington.

This progress was never easy.

The isthmus was divided among many municipalities and boards of various hues, fractious and divided, each wanting local control but often not prepared to pay for essential regional services.

Continued strife accompanied projects such as sewerage, where various interests advanced solutions in which the residue was deposited in the harbour, gulf or processing ponds; transport, involving the merits of the private car against trams, buses, trains, the building of motorways and the central artery of the harbour bridge; the international airport; and the Aotea Centre.

Our attention is also drawn to enduring projects: the Port of Auckland, Mt Eden jail, the War Memorial Museum, the Colonial Sugar refinery; and the prolonged battle between the prohibition movement and the booze barons, so-named by the author as Sir Ernest Davis, Sir Arthur Myers and Sir Henry Kelliher, the bosses at various times of Dominion Breweries and Lion Nathan.

Noted as directors of various leading companies, these men were also linked with the mayoralty and city councils.

Even Michael Joseph Savage was associated, since at one time he was a cellar-man within the Davis empire.

The author looks further behind the scene as he draws on John A. Lee's autobiographical writing and association with Kelliher to describe the good and the bad of the captains of industry.

As well, there are other reminders of a colourful past.

Sir John Logan Campbell, responsible for the obelisk on One Tree Hill and mayor during the royal tour of 1901; Dove-Myer Robinson, long-time mayor linked with the sewerage debate and his disinclination to accept retirement; and Dame Catherine Tizard, a popular mayor in more recent times.

For those who know Auckland, the author describes the central business district before and after the extensive reclamation that took place.

He deplores the failure to preserve the best of earlier architecture, or make use of opportunities to develop open areas for the use of future generations.

We can appreciate the author's enthusiasm for Auckland and we can all see the profound economic and social effects of the influx since 1945 of Maori, Pacific Islanders, Fijian Indians and Chinese.

In the future, there are many problems of governance at regional and municipal level to be solved.

Perhaps the persistent rain we see on television is an apparition.

Nevertheless, those who live there and some Sassenachs will enjoy this book.

Ron Tyrrell is a Dunedin historian.