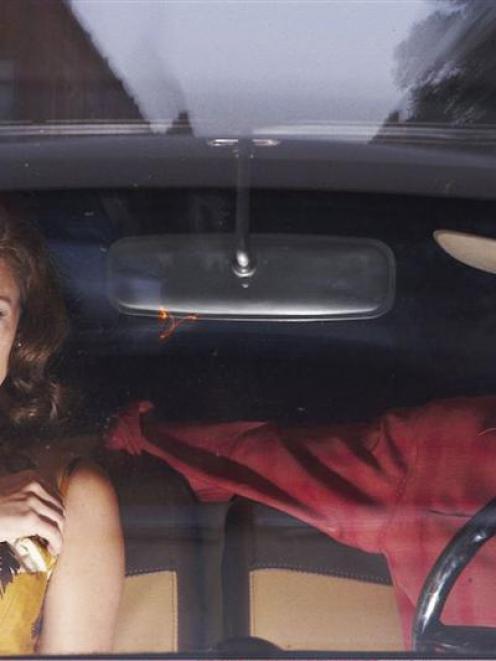 Scene from The Killer Inside Me.
When mainstream cinema seems capable only of giving us frothy fun, either through explosions or wardrobe, the International Film Festival is the time to savour the delights of subtext and ambiguity.

What better way to pass a winter's day than to retreat to an Octagon café with friends and nut out the meaning of the festival film you have just seen?

With ticket sales providing the vast bulk of the festival's funding, they are focused on providing memorable cinema. My highlights are:

• A Prophet:
Director and writer Jacques Audiand has always been interested in the power dynamics between males, and when he attended a screening of one of his films at a prison he was so taken aback by the conditions that he immediately determined that his next film would be set in a prison. Newcomer Tahar Rahim is mesmerising in this dream role of a rookie prisoner being shaped and then reshaping the prison environment.

• The Ghost Writer:
Roman Polanski is in the news for all the wrong reasons. With this, very likely his last movie, he takes a Robert Harris thriller, a strong cast and turns to his normal preoccupation: The powerless individual struggling against forces the extent of whose malice he does not quite comprehend.

• Exit Through the Gift Shop:
Anonymous artist Banksy is the hottest thing in the art world at the moment. So when he directs a film about street art everyone wants to see it. Of course, Banksy's reputation as a trickster has many seeing the entire thing as an elaborate hoax.

• The Killer Inside Me:
British director Michael Winterbottom (9 Songs, 24 Hour Party People, Welcome to Sarajevo) has made his first American film and he has gone for broke with this film noir about a sociopath deputy sheriff let loose in Texas. He has also bravely cast Jessica Alba and Kate Hudson in serious dramatic roles. Audiences have been shocked by the violence but have agreed that Winterbottom knows how to tell a story.

• Certified Copy:
Juliette Binoche is one of those actresses who lights up a room. She could make a good living just being luminous, but she is more interesting than that. Here we have a film with multiple layers that forces us to tease out the inner meanings. As a bonus, the Tuscan landscape is as luminous as Binoche.

• I Am Love:
Any fan of Tilda Swinton knows that her films are never an easy ride. We are in Milan among the haute bourgeoisie - the class that has everything but emotion. Running away to a cave is one way of finally feeling something and as ludicrous as it may seem to us practical Kiwis, Swinton invests it with meaning and pathos.

• Cyrus:
John C. Reilly does not have poster-boy looks, which leaves men bemused by his appeal to the ladies, but appeal he does. Here he charms as a socially awkward divorced guy who finds new love with solo mum Marisa Tomei, but has to fight with her grown-up misfit son for her affections.

• Agora:
I have always been fascinated by the great library of Alexandria, but for most the draw of this will be Rachel Weisz. She plays Hypathia, the daughter of the last librarian and a mathematician and teacher of philosophy in her own right. As a documented autonomous woman she has fascinated various eras, with the meaning of her life being amended to fit the preoccupations of each time in which she has been rediscovered.

• HOWL:
The obscenity trial of beat poet Allen Ginsberg was a cultural totem for America, but I want to see this because of rising actor James Franco. For a young actor Franco has that rare ability to surprise you with the boldness of his roles and the way he goes about them.

• Four Lions:
Only the Brits would have the nerve to do a comedy about home-grown jihadists, but as ex-president Bush once might have said, by not mocking them, we let the terrorists win.

• Carlos:
This calls for real commitment as the five-hour length is divided into three sessions, but the festival organisers are passionate about this one. They really, really want you to see it so they have created a special package deal to ease the financial burden. For everyone who loves action movies but wishes they were not so embarrassingly childish.

• Honey:
Sometimes a child's face is worth 10 pages of dialogue. The mysteries and beauty of life as seen by a 6-year-old living in rural Turkey would not seem the most exciting fare, but this was good enough to win the Golden Bear at the 2010 Berlin Film Festival.

• The Illusionist:
An adult fantasy where you can leave those nasty grown-up suspicions about what is really happening and let this wistful story of a fading magician who is adopted by a young girl charm you with its recreation of the Edinburgh of 50 years ago.

• The Concert:
The idea of a bunch of unemployed musicians impersonating the Bolshoi Orchestra is too silly for words, but as a revenge fantasy on 1980s Soviet socialist bureaucracy it satisfies a need. A feel-good comedy where no national stereotype is left unused, but also a musical education that taps the emotions as only music can.

• Please Give:
Tapping the deep vein of affluent American dissatisfaction with the meaninglessness of their lives. These refugees from a Woody Allen movie fret and fuss, yet when it all comes down to it they are too darn comfortable to make meaningful changes.

• Animal Kingdom:
Any connoisseur of Australian true crime will know of the Walsh Street cop-killings. This is loosely based on the criminal family behind the killings and has a top-notch cast of Australian talent with a special mention going to Jacki Weaver as the matriarch of this nest of vipers.

• Lourdes:
Regardless of whether you believe or not, Lourdes is a fascinating phenomenon. Christine is not a believer, but with MS at least it gets her out of the house. When she alone appears touched by a miracle the reaction of the rest of her group is less than Christian.

• Father of My Children:
We assume that workaholics lack warm interpersonal relationships, but that is not always the case. Sometimes it is just that they have a fascinating all-encompassing job. When a man works himself to death, should he be condemned or mourned by those left behind?

• My Dog Tulip:
Another charming animated movie intended for grown-ups. People still love a good animal story, but it is a genre that gets ignored as old fashioned. Set in 1947, part of the point is that it is old-fashioned. As an additional bonus, this contains some of the lovely Lynn Redgraves' last work.

• Winter's Bone:
Children in movies about drug use are usually just seen standing to the edge of shot, silently watching as their parents are arrested. When all the adults in your life are variously out of commission down to drugs, the children have to try and take control. This follows spirited Ree as she battles adult indifference to keep her home and family intact.

• Predicament:
Ronald Hugh Morrieson was the king of Kiwi Gothic. A film adaptation of one of his novels is always a cause for excitement. That Jemaine Clement is one of the main actors is another inducement to rush to see this.

• The Hopes & Dreams of Gazza Snell:
Gazza Snell has never quite grown up. He always has his eye on the next big idea without ever bothering to satisfactorily wind up any current project. Robyn Malcolm, the Kiwi everywoman, appears as his hard-pressed wife and at times you wish she had a little more of Cheryl West in her to give Gazza the boot up the behind he so richly deserves.

• The Insatiable Moon:
Everyone's favourite playschool presenter Rawiri Paratene plays Arthur, the second son of god. Based on real members of a halfway house located on Ponsonby Road, this is the old school made on the smell of an oily rag style of Kiwi film. As always when dealing with mental illness, the eternal question of just what exactly constitutes being normal is examined.

• La Danse:
The Paris Opera Ballet: people love stepping behind the curtain and peeking into the contradictory world of dance - all that grace and ethereal beauty masking years of gut-wrenching toil. A few years ago Ballets Russes was hugely popular - this should be the same.

• Love, Lust & Lies:
Director Gillian Armstrong has been following these three women, on and off, since 1976. As a newly-minted film-maker she was hired to make a 20-minute film about teenage girls. This is the fifth time she has returned to the lives of the girls she picked at random for that task. Just as in the more famous 7 Up series, the results fascinate.

• Secrets of the Tribe:
Feuding academics are always good fun for documentaries. Here we have competing schools of anthropologists wrangling over how best to understand the cultural practices of a Amazonian tribe in Brazil. Unfortunately this bickering has consequences for the people being studied.

• Teenage Paparazzo:
When a celebrity (Adrian Grenier from Entourage) makes a documentary about paparazzo you know you are going to get an all-access pass. Grenier has been working on this for years. It will be fascinating to finally see it.

• Once Upon a Time in the West:
As revered for the way it looks as for the plot, director Sergio Leone took the washed-up formula of the western and made it exciting for a whole new generation of fans.

• The Red Shoes:
Since the guys have a western, the festival has played fair and given the girls the ultimate dance movie - the single most quoted reason for becoming a ballerina. Ballet teachers throughout Dunedin will be rubbing their hands in glee at the surge of new recruits this is going to bring them.

YOU KNOW YOU SHOULDN'T

• Human Centipede:
Remember when you were a kid and all the other kids at school talked about this great film and your mother said you don't want to watch that, it will give you nightmares, but you went anyway and it did? Well, this is that film.

• Catch it all -
The 2010 New Zealand International Film Festival runs in Dunedin from July 23-August 8 at the Regent Theatre and Rialto cinema.