The medium is still the message 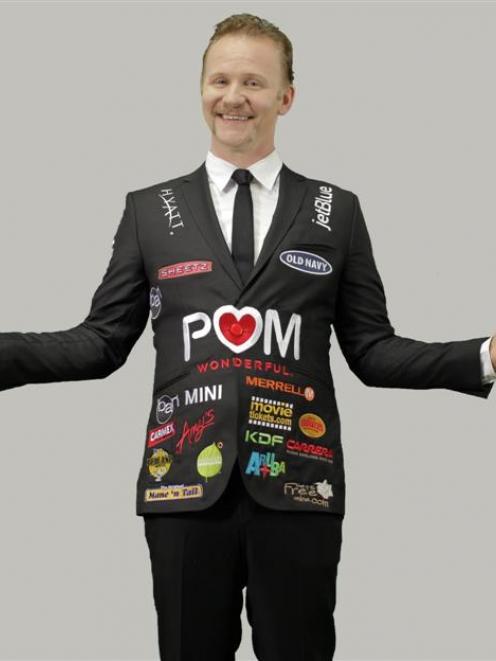 Among the many if-you-don't-laugh-you'll-cry moments in Morgan Spurlock's latest documentary, POM Wonderful Presents: The Greatest Movie Ever Sold, is one that encapsulates the American film-maker's motivation for embarking on a project that provided him with equal parts insight and personal abuse.

Consumer advocate, environmentalist and former United States presidential candidate Ralph Nader, asked by Spurlock to suggest when a person could expect to escape advertising's incessant bombardment, provides a concise answer: "In your sleep".

In POM Wonderful Presents: The Greatest Movie Ever Sold, Spurlock explores the world of product placement, marketing and advertising. But there's a twist. The film has been fully financed through product placement of various brands, all of which are integrated transparently into the film.

Although using brands to promote and/or help fund feature films is nothing new for Hollywood - notable recent examples include Transformers and Iron Man - it is new territory for a documentary.

In fact, Spurlock went so far as to sell naming rights, hence the inclusion of American pomegranate drink manufacturer POM Wonderful in his movie's title for a cool $US1 million.

"After you have watched this movie, I don't think you'll watch television and film in the same way again," says Spurlock via telephone during a promotional visit to Auckland last week. In a case of life imitating art, he confirms he's wearing the same Merrell shoes that he promotes in his documentary. 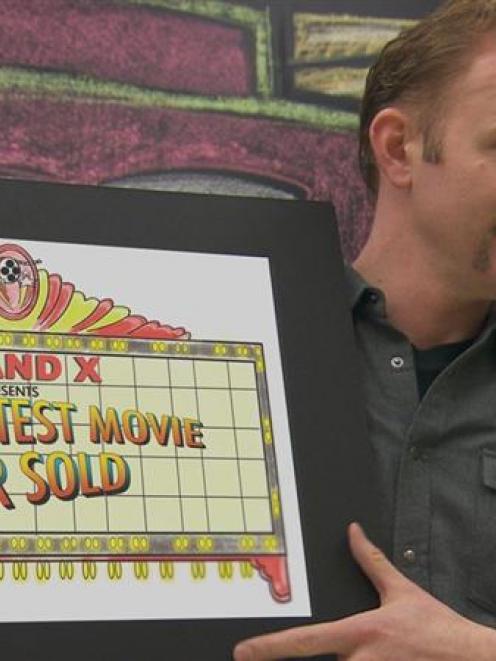 Morgan Spurlock pitches the film.
"I think at some point everyone is going to want to stop giving me things for free. Unfortunately, I didn't put 'lifetime supply' in the contract. I wasn't a very smart negotiator."

Spurlock might be chuckling, yet he is serious about his subject matter.

"Everywhere you go someone is trying to sell you something, whether it is while pumping gas, riding in an elevator, sitting in the back of a cab or even going to the bathroom - there are ads in front of you.

"I think we live in a world where we have become so desensitised to the saturation of marketing. We are really good at it in America. It seems we find a way to wedge advertising and marketing into just about everything.

"But it is making its way around the world. It has just become legal in the United Kingdom to have product placement on television and is becoming a big business there. It is starting to make its way into different European countries. It is going to get worse," Morgan says.

"I saw the ever-pervasive world of advertising was making its way into entertainment and thought it would be good to pull back the curtain and get brands to actually pay for a film about the process.

"The idea was to get in and see the machinations. I wanted to capture as many of the negotiations as possible, to go into rooms people never get to go into."

Spurlock arrived at the idea for a multilayered satire about two years ago while he and fellow producer and co-writer Jeremy Chilnick were discussing American television show Heroes and its inclusion of a Nissan SUV into the series' storyline.

The discussion turned to how product placements were more than just advertisements for products; they were also tools that enhanced the marketing "footprints" of shows and films.

Could a little movie, even a documentary, have the same type of partnerships and co-promotion opportunities?

He wanted to make a film that had more cross-promotion than any documentary before had.

By the time The Greatest Movie Ever Sold screened at the Sundance Film Festival in January, the movie's producers had signed up 15 companies; another seven were added before it went to general release in the United States in April.

"So now we have 22 brand partners and a lot of them are global brands, so they are continuing to push the film on a global basis. They not only came to the table offering the film cash but also marketing dollars," Spurlock boasts.

Sponsors were provided with brand category exclusivity. In return, those brands placed Spurlock at the centre of their brand campaigns and advertisements and have the right to promote themselves in association with Spurlock and the film as "The Greatest".

Significantly, the contracts stipulated Spurlock would maintain creative control of the film's content and final edit.

Spurlock describes that clause as a "near-fatal flaw", a key hurdle in negotiations with companies concerned about relinquishing control. Hardly surprising, given advertising and marketing is all about maintaining control of one's image.

"I called more than 600 companies, of which 585 said no. I think there was a tremendous amount of trepidation. For one, they were scared of transparency; the last thing they wanted to do was talk about what really goes on within their business practices and how they market products to people. They are so precious with their brand identity.

"The people who came on board really did give up control. And that control is a big piece of the puzzle. Actually, I think it has made those firms look really savvy and ahead of the curve.

"The fact we were able to maintain creative control of the movie going into the editorial process was an incredibly fortunate thing. It was a miracle they were willing to allow that."

Spurlock describes his role as both a film-maker and an anthropologist. In documenting both the absurdity and pervasiveness of product placement, he also had to walk a fine line and maintain a respect for the film's sponsors.

Once again, Spurlock laughs when asked if his track record as director and producer of award-winning 2004 documentary Super Size Me, as well as other left-field releases such as Where In The World Is Osama Bin Laden? and What Would Jesus Buy? worked against him when pitching the idea to companies.

"Well, it did help get phone calls returned. People called back because they didn't want to be those people in the film seen to not return calls. They'd ring and say, 'we just wanted to call you back and say, no, thank you'.

The majority did not call back at all." However, some delighted in the rejection process, Spurlock recalls.

"We called Abercrombie and Fitch (an American retailer which focuses on casual wear for consumers aged 18 to 22, has more than 300 locations in the United States and is expanding internationally) ...

"Here I am on the phone and a woman from Abercrombie and Fitch says, 'do you want me to tell you why you're not Abercrombie material?' I said, 'absolutely'.

"She went on for what felt like hours and ripped apart every bit of my face, my body, my being. At the end of it, I hung up the phone and thought, 'oh my God - that was amazing'. Unfortunately, we weren't recording the conversation. That was one of the most vicious phone calls I got."

"No brand wants to be first. That's something I came to realise. Once the first brand - which was Ban deodorant - agreed, then another came on board a month later.

"The fourth brand that joined was the Hyatt hotel chain. That changed everything. They are a Fortune 500 company, a global influence who have been around for decades. That gave everyone else the key to say, 'I'm in'."

To help break down barriers, Spurlock used the language of marketing.

"We started pitching to brands and we realised we weren't getting a lot of headway. That's when I sought a company that could help us understand how to communicate with companies in a way that would be beneficial, where we could create real added value beyond just making a movie.

"They helped us to put together a package that seemed more attractive to sponsors. At that point, we were not just pitching a movie; we were pitching the marketing beyond the movie. What I realised as I was making the film - which is what happens in a lot of blockbusters - is that you have to be working on a marketing campaign while making a movie.

"I learned a tremendous amount while making this film. Ultimately, it will benefit my future films from a marketing aspect. Will there be brand associations? Probably not. But in terms of understanding how to market something in a relevant way, it was a huge benefit."

Such an outcome is somewhat ironic given Spurlock's cynicism about marketing prompted the initial idea for such a film: in purporting to rail against advertising, he has a product to market.

At its core, POM Wonderful Presents: The Greatest Movie Ever Sold is a plea to take notice, says Spurlock, whose on-screen journeys take him from corporate meeting rooms, to the streets of Brazilian city Sao Paolo (where outdoor advertising has been banned since 2007), from an American school that has compensated for education budget cuts by selling advertising space on school property, to a company that tests film trailers by recording viewers' reactions via MRI scans.

"I think we live in a time when we are so bombarded with advertising and marketing that we have become desensitised to it. We don't realise how much of it is there and how much we are taking in.

So should we laugh or cry when watching his film?

"You can do a little of both."

• Catch it
POM Wonderful Presents: The Greatest Movie Ever Sold screens at the Regent Theatre as part of the New Zealand International Film Festival on Tuesday at 8.30pm and Thursday at 2pm.

New York-based writer, director and producer Morgan Spurlock's first film, Super Size Me, premiered at the Sundance Film Festival in 2004 and won him best directing honours; it went on to win the inaugural Writers Guild of America best documentary screenplay award as well as garner an Academy Award nomination for best feature documentary.

Since then, he has directed, produced and distributed multiple film and television projects, including the television series 30 Days and the films Where In The World Is Osama Bin Laden?, Confessions Of A Superhero, Czech Dream, Chalk, The Future Of Food, What Would Jesus Buy? and Freakonomics.

In the 1800s, Jules Verne sold the naming rights to shipping companies in his novel Around The Word In 80 Days and in the early days of film, Thomas Edison put advertisements for his own products in his movies.

When television first began, shows were paid for - and written - by advertisers; the whole purpose was to sell a product. Let's not forget that soap operas were created by soap companies for the sole purpose of selling more soap to mothers.