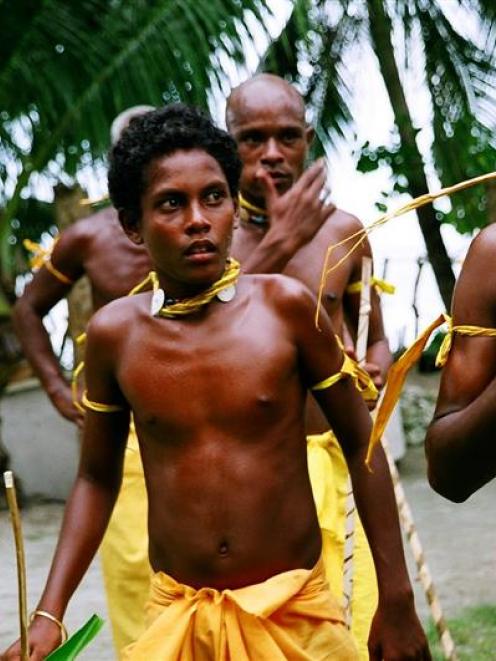 The people of Takuu are running out of time as climate change claims their home.
Briar March's ambitious new documentary, which will screen in this year's International Film Festival, should launch her as a film-maker to watch. She tells Rebecca Barry, of the NZ Herald, of the sacrifices she's made for her craft - and why not everyone wanted her to make her latest movie.

Most film-makers had given up trying to get to Takuu. The remote atoll, also known as the Mortlock Islands, is 250km northeast of Bougainville, Papua New Guinea.

It has no airport; visitors must travel from Port Moresby on the service boat, which you could call unreliable if it actually had a schedule. Those who do manage to get there would have a hard time shooting anyway. There is no electricity in this endangered island paradise. 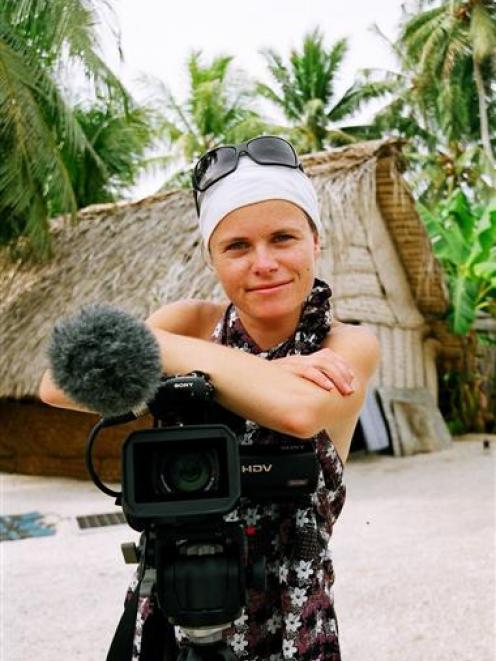 Briar March on location on Takuu. Photos by NZFF.
That wasn't about to stop Kiwi documentary-maker Briar March. Armed with solar panels, a generator and her film camera, the 29-year-old was determined to capture the unique plight of the Takuu people.

Their place in the world - both geographically and culturally is in danger of being swallowed by climate change.

As March's poignant eco-documentary There Once Was An Island: Te Henua E Noho shows, waves routinely flood the locals' homes, and the protective sea walls the islanders erected some years ago to protect them have only short-changed the island's natural ability to build itself up.

The once-abundant taro crops have become sodden with salt water. The fine white sands known fondly to those who grew up there have almost completely washed away.

The Takuu film is one of three of March's documentaries screening at the upcoming New Zealand International Film Festival.

The others are Michael and His Dragon, and Sick Wid It, short films she made while studying for a masters' degree in documentary film at California's Stanford University.

Her first feature film, Allie Eagle and Me, in which she followed the pioneering feminist artist as she made the transition from lesbian separatism to pentecostal Christianity, screened at the festival in 2004. Then, March was the youngest director with a feature film in the running. So it's no surprise she's back, says festival director Bill Gosden.

"It's a powerful little film. It gives a voice to several views, which gives it its intimacy and impact."

It works as a literal documentary of an innocent people's plight - the irony is not lost on the 400 Takuu locals that they are not the architects of their own demise.

March's film charts the heart-breaking decision the community must make: whether to stay at the mercy of the tides or relocate to life unknown on the mainland.

The film's scope is a rare combination of grand and intimate. Amid the swaying palm trees apocalyptic themes are evident and family tragedies play out, Takuu acting as a microcosm for the entire planet.

"There are lots of films about climate change out there that are scientific, fact-based," says a hellishly jetlagged March, on the phone from Brussels a day after There Once Was an Island screened to United Nations delegates at the Millennium International Documentary Film Festival.

"I wanted to find the human face of the story, how communities are responding to environmental change."

March first read about Takuu in an article by New Zealand ethnomusicologist Richard Moyle, who had spent years studying the isolated community and became the only New Zealander proficient in their native language.

One of the few Polynesian communities in which Christianity was not fully adopted, they instead held fast to their own customs, the very fibre of which is now threatened. Moyle had been approached many times to make a film about Takuu but until March came along, none had gone through with it.

Ambitious is an understatement for the challenge that lay waiting. Everyday living on Takuu is a full-time job. Fishing, cooking, cleaning and child-rearing can take up more than a few hours in an office.

"It was a logistical nightmare," says March, who began filming on Takuu in late 2006. For two months she shot what she thought would be the makings of the film. Two years later she returned, this time with a crew.

"I probably should have run screaming because it was such a tough project," says the film's producer, Lyn Collie, who also joined March on the second expedition.

Unlike Allie Eagle and Me, in which she narrates the story and appears on camera, March is mostly removed from the story. But she was responsible for bringing two scientists back to the island to assess the damage, thereby manipulating the reality of what she's documenting.

"Briar tends not to take a didactic approach from the beginning, but goes in thinking, 'how can I tease this out on screen?'," says Collie.

"Because of that her films are not going to be like Al Gore, making a strong argument in service of the point I'm making. She tends to think, 'how are people experiencing this? What's really happening? What's the full complexity on the ground?'."

Some locals were cautious of March's motives. Hostility erupted when the skipper of the boat the crew chartered to get to the island went scuba diving; some were worried they were out to over-fish.

"The biggest misunderstanding was that many people thought my film was going to make lots of money," says March, who struggled to fund a non-New Zealand story.

"They were very concerned we were taking advantage of them. It's as though turning up there with a movie camera makes people think that, and they presume all films are like Hollywood blockbusters. I can understand why but of course my movie isn't going to make any money. I've never been paid for any work done on a film."

There Once Was an Island was incomplete when March was accepted to attend Stanford University's film school. Faced with the astronomical fees - she estimates the cost of the tuition and living costs throughout the two-year course at about $200,000 - she knew she'd need a miraculous helping hand.

Divine intervention came first with an AMP scholarship and then with a prestigious Fulbright Scholarship; while studying she earned three more scholarships, and for her first year an American family provided food and board.

"I see film-making for me as a lifetime vocation, but it's very unsustainable," says March. "It's not something I could do forever unless I have other forms of income and support. I thought I could go into teaching to complement my practice. And I didn't have a masters' so I thought it was a good idea to do that."

On top of the academic work each quarter students must produce an original short film, working with a range of styles and equipment, from black-and-white on 16mm to shooting on a hand-cranked Bolex camera.

The hours were long, the work tough. In the final quarter of her first year she lost access to her subject three days before she was due to start shooting.

The exposure it has given her to top-class films has been second only to the theory - the allegorical elements in There Once Was An Island were partly inspired by a class on eastern European film, and the way directors there used metaphor to get around socialist-state censorship.

"That has been such an inspirational class. That will really change the next films I make."

March has always been drawn to dark, life-and-death themes: environmental, social and cultural issues, human rights, stories told from an outsider's perspective. In Michael and His Dragon, she follows American war vet Michael Ergo who has succumbed to post-traumatic stress disorder having returned from Iraq.

In an effort to lighten up she made Sick Wid It, which, in the spirit of David LaChapelle's Rize, tells the story of Oakland youths transcending gang violence through dance. It's uplifting until one of the subjects confesses that if he wasn't dancing he'd be killing people.

"I was like, 'oh damn, this is serious'," March says laughing. "I couldn't help moving into that terrain."

Perhaps she'll have more luck with her next film, which follows high school students as they get ready for the prom.

March, who grew up in Bethells Beach, on Auckland's west coast, went to Elam art school with her sights set on becoming a painter like her father, Derek March (her mother, Liz March, is a photographer).

She soon became frustrated that her paintings weren't making as much impact as she'd hoped. Film, on the other hand, had the potential to reach a wide audience.

"I love that you can move around the world with a DVD, and project it on the wall. It has a way of reaching everyone. It's a powerful art form."

Not even a long-term relationship was going to stop her living her dream. Putting her career first, she split from her partner, who, with a business of his own, wasn't willing to up and leave for the US.

"It was really hard ... but I realised I had amazing opportunities ahead of me. I'd worked so hard for the Fulbright, and I could see that if I did this, make film-making a realistic vocation for me, something I needed to do was take extra steps to make that happen. If my partner couldn't be part of that, what could I do?"

A family is on the cards one day, she adds, although for now, she's dedicated to raising her cinematic offspring.

"When you make a film it really is like having a baby. You get the idea which is like you conceive. That germinates. Then you start the process of making it into a reality - you fundraise, you give birth to it, you start shooting. In editing, you experience all the growing pains.

"You have so many doubts, you're not sure where you're going, it's very daunting. Finally you send it out into the world."

• The New Zealand International Film Festival runs from July 23 to August 8 in Dunedin.

• Michael and His Dragon screens at Rialto on Thursday August 5 at 6.15pm and on Saturday August 7 at 11.15am as part of Homegrown: Quirky Stories.

• Sick Wid It screen at Rialto on Tuesday July 27 at 6pm and Wednesday July 28 at 1.45pm as part of Homegrown: Dance Films.