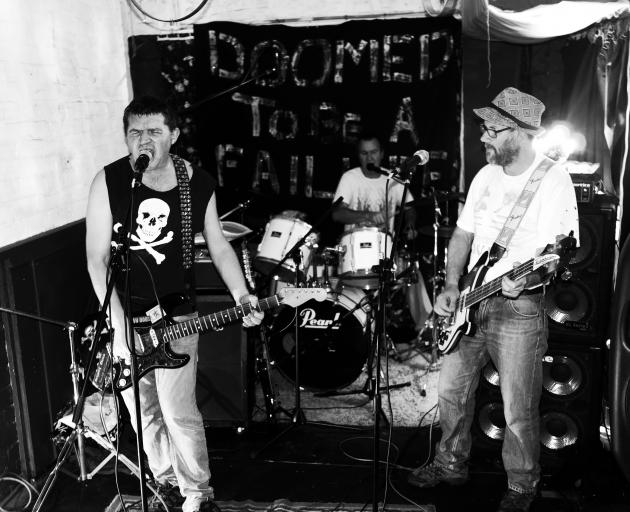 Chemical Damage playing at Doomed to be a Failure 3. Dee's Cafe and Venue host Doomed to be a Failure 8 tonight. Photo: Dunedinsound.com
If you hang around the cool sections of town you may have seen posters for Doomed to be a Failure, usually smattered with obscure looking logos and an aura of dark mystery. It's the local underground music scene at its finest, and this weekend marks the eighth iteration of the near-monthly gig series which has been spicing up parts of Princes St for most of 2019.

Doom to be Failure started out last year as Joseph (Xombie) Horrell and his friends playing gigs at Dee's Cafe and Venue, the burgeoning new space located in what was formerly Purple Rain.

"I was putting on gigs and I had to come up with new names for each one," he explains.

Since then rather than failing it's been steadily growing, while still remaining just the right amount of underground. Literally too, since the venue space at Dee's Cafe is located downstairs, under the cafe.

"I guess the first few were quite good attendance-wise, and then there were a couple of lull gigs, but it was still quite good. The last one was probably the biggest, we had High Twitch Athletic Club, that was massive.

"Dee's has a great vibe once you're down there and realise what it is; it's pretty cool. It's just getting the people to venture down that end of town, I guess."

Dee's, I can confirm, is woefully underrated as a venue. It feels like the closest thing we've got to a DIY space right now - it's a little bit scrappy and strange (it hosts everything from raves to kid's birthday parties), yet full of character ... but not too much.

"Venue feel" is weird and hard to pin down, but Dee's is cool and the pies are good, too.

Most of the bands who've played Doomed gigs lie on the heavier area of the spectrum, and tonight is no different. It's the perfect opportunity to shake off that bone-deep winter chill and fortify your skeleton with RIFFS.

"I've got Blood Evil, Deathcall, Sugarcoated Bullets, my band Your Face and a side project of mine called Exothermic. So it sort of ranges from punk through to death metal, I guess.

"It would probably suit people that like heavier music, but if people want to expand their horizons and listen to something new ...

"It's an open society really, we welcome everyone."

And, importantly, the other goal for Joseph is providing a launch pad for young or upcoming musicians, so he's keen to expand the genre pallette, and keen to hear from any musicians who are looking for somewhere to play.

"I guess contact me if you're in a band and you want to get out there and try gigging. I know how it is, how daunting it is to be in a band for the first time, where do I go, where can I play."