Hope for a forgotten future

"Initially I had this idea of looking back at tiny little moments that stuck in my memory and seemed really important and I kind of visited those, and I guess they took place in certain parts of Wellington, certain flats that I'd lived in.

"I started exploring those little vignettes of my life and writing songs about them. And in doing so I was looking for the meaning of them, and I didn't find so much meaning in those particular moments in time but more in the process of looking back." 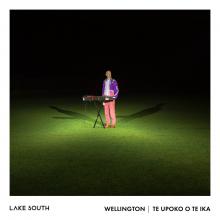 Accompanying the album release is a companion app which connects the songs to the places that inspired them through geolocation. It's like Pokemon Go, but instead of spinning Pokestops you're standing on a hill listening to synthpop.

More than that, it's a really interesting way for an artist to draw a connection between a place, a memory and an expression of that memory.

"For some reason, like a particular hotbox you had with your mates seems so epic, so it's kind of visiting that epicness of those places, and looking back at it with 10 years of experience and thinking maybe you were a bit stupid back then."

Musically they're very much pop songs, texturally they feel like synthpop, but the arrangements include acoustic instruments such as marimba and violin.

"I start all the songs on the guitar, just acoustic guitar and voice, and I write just really simple chords and make sure they work.

"And then I build out from that. Often when I'm writing on the guitar I'm hearing the instrumentation, so when I come to make it and add more stuff on the computer, it's normally already in my head, it's just a matter of finding the right instruments and stuff to colour in the outline."

They're his stories but they feel like they could be your stories, too. Or at least there's something intensely relatable about remembering those past moments which for some reason feel significant. The chorus of South Coast, located on top of a hill overlooking the Cook Strait, repeats the refrain "it's funny what you keep alive", and it really is.

But it's not a sad album. It's full of regret, but in a way which feels kind of good. It captures the feeling of nostalgia so well and, if anything, that should compel the listener away from complacency towards living life.

"I would say the songs are more nostalgic and sentimental than regretful. There's a longing for something lost, but hope for a forgotten future."

Lake South with Robert Scott and Timothy Blackman, 8pm tonight (Saturday, August 24) at The Cook. Tickets $15 from undertheradar.co.nz or $20 on the door.