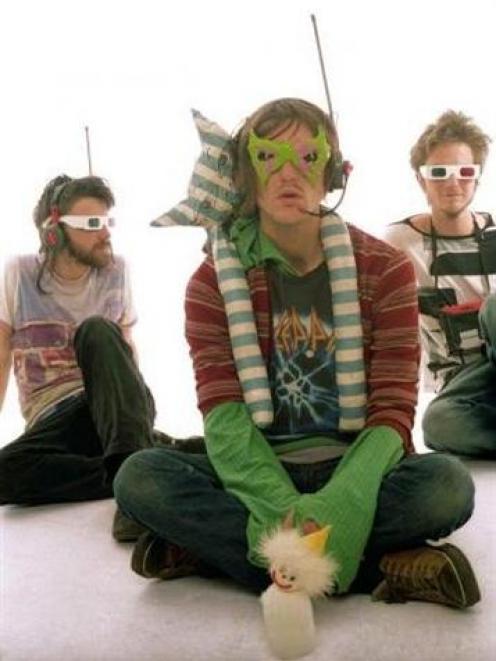 Thought Creature
Sunday was once a rest day. It still is for devotees of many religions, but this weekend worshippers of the church of rock are in for a couple of fabulous multidenominational services.

Refuel calls the faithful to prayer early with two Wellington bands playing a Sunday matinee. Thought Creature and Full Moon Fiasco are due to be supported by the Killmore Girls and Axe Handal.

It will be the last time people will be able to catch the Wellingtonians for a while as their members are heading overseas.


Early night
Those more into evening worship could travel to Port Chalmers, where Dunedin veterans the Puddle lead a service in the Dunedin Sound vein with support from former Gisborne band, and now Dunedin faithful, Opposite Sex.

They play an early show at Chick's, from 7.30pm. Puddle drummer Ian Henderson says it's so you can get along after tea and be home for a Milo and an early night before work or school on Monday.

Two-piece Gisborne punk-jazz-pop band Opposite Sex will soon join the Puddle on Fishrider Records with their debut album.


Chilling
The Chills are performing a one-off Auckland show on Friday July 29 at The Kings Arms, supported by the Puddle.

Chills founder Martin Phillipps also gave a solo performance in support of the Hone Tuwhare Trust on July 7 at The Classic Theatre.

"I am really getting lots of enjoyment out of my music at present and it will be great fun to have the five-piece band we took to Australia last year on stage again," Phillipps said.


Foo Fighters return
The Foo Fighters are set to rock Auckland in December. Dave Grohl, Taylor Hawkins, Nate Mendel, Chris Shiflett and Pat Smear will perform classics from their multi-platinum, six-time Grammy Award-winning catalogue such as Everlong, The Pretender, Learn To Fly, All My Life, Best Of You, new staples Rope and Walk and more.

• Def Leppard will return to New Zealand on October 12 with US rock band Heart for a concert at Auckland's Vector Arena.

The band has opened for such monster acts as Foo Fighters, Them Crooked Vultures and Queens Of The Stone Age.

Cairo Knife Fight's new EP II (a follow up to their self-titled debut EP released in 2010) is released on Liberation Music. Keep an ear out for the first single from the II EP, The Origin Of Slaves.

Cairo Knife Fight will be on tour with AHoriBuzz next week. They play Chick's Hotel, Dunedin, on July 14, Revolver in Queenstown on July 15 and Opium in Wanaka on July 16.

Then in August they return with Head Like A Hole, playing Urban Factory, Dunedin, on August 19 and Revolver, Queenstown, on August 20.