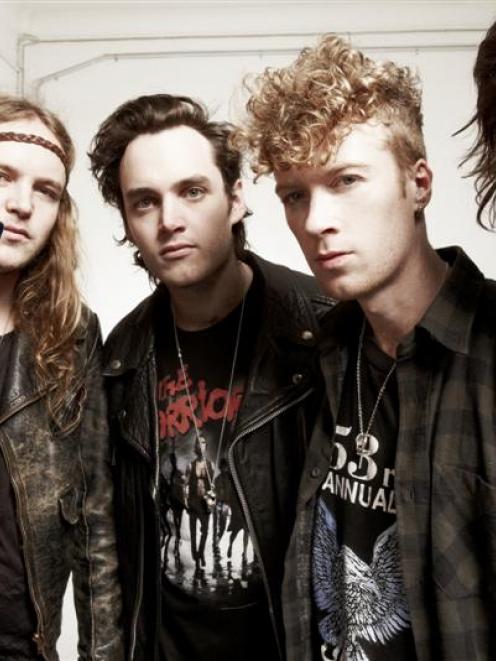 Midnight Youth.
The good news is Midnight Youth are touring their new album across New Zealand. Bad news, Dunedinites will have to travel to Christchurch to see them as there is no Dunedin show on the calendar.

On the tour the band will perform songs from their new album World Comes Calling, which debuted in the New Zealand album charts last week at No 4.

The band won Best Rock Album and Best Group at the 2009 New Zealand Music Awards, for their debut album, while the single The Letter collected the award for Most Played Song on New Zealand radio in 2009.

While the band may have been quiet on the home front, it has been clocking up the frequent flyer miles on a relentless gig schedule in both Australia and the United States.

APRA Award-winning Dunedin songwriter Langley will be playing material from his debut album Featherbones, and intends to also "road-test" songs for his sophomore album due for release next year.

For Langley, these shows follow a sold-out tour with Darren Watson in August, and are a forerunner for what is shaping up to be a very busy summer that includes tours with The Eastern and Rosy Tin Teacaddy.

Mel Parsons recently finished a national tour to support the release of her new album Red Grey Blue, and has supported the likes of Anika Moa and Greg Johnson.

Jordie Lane arrives in New Zealand direct from an Australian tour supporting The Moody Blues, of Nights in White Satin fame, so either he's got an awesome agent who can wheel and deal with the best, or he's really quite good, one thinks.

The trio play at The Church on Dundas on December 6 before heading north to Timaru and beyond.

The evening involves 12 invited presenters showing 20 images each, with only 20 seconds to speak to each image (a total of 6min 40sec per presentation). The magic is the rapid-fire presentation and the diversity of presenters and topics on the night. It is about bringing artists and designers together and being inspired by their ideas. Pecha Kucha Nights take place in more than 400 cities around the world.