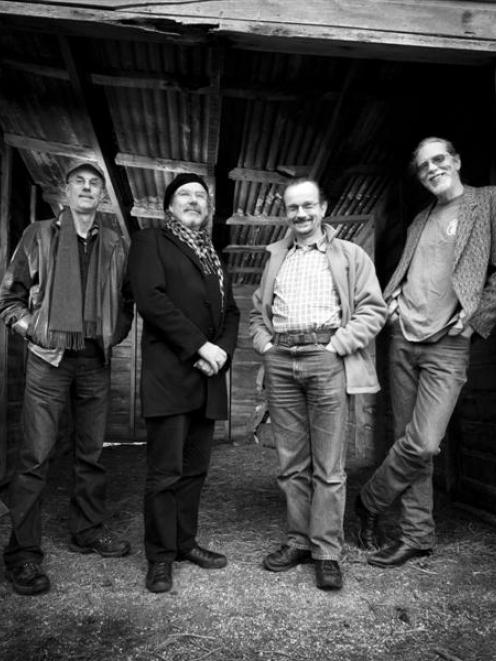 The Chaps (from left): John Dodd, Mike Moroney, Marcus Turner and Hyram Ballard. Photo by Clive Copeman.
South Island musicians are represented strongly in the Best Folk Album category of this year's Tui awards, with acts from Westland, Canterbury and Otago all in the line-up.

The finalists are: Mel Parsons for Red Grey Blue, Amiria Grenell for Three Feathers, and The Chaps for Don't Worry 'Bout Your Age.

Dunedin's The Chaps hope to follow Delgirl's footsteps and take home the Tui, as the Dunedin girls did in 2008 for their debut album, Two, Maybe Three, Days Ride.

Bass player John Dodd says the band has grown considerably since forming in 1989.

"I know that in our first few years I played electric bass and Moroney played some electric guitar ... Over our 21 years, we've played a lot of songs. Many have fallen by the wayside as we move on, but there are still a bunch of those early things that are our backbone repertoire. Other than that, it feels as if we just do what we do, and we are essentially the same band, only wiser and balder (except Hyram of course)."

As for the other finalists, Amiria Grenell is the youngest of Kiwi folk stalwart John Hore Grenell's four children and Three Feathers is her second album and third recording. Family links run thick through the recording with brother Redford featuring on drums and guest appearances from partner Tola and Amiria's father John.

The Tui for the Best Folk Album 2011 is to be presented at the Auckland Folk Festival in Kumeu following the "Tui Finalists Concert" on the evening of Sunday January 29.

The Mosgiel-born Otago girl grew up in Wanaka.

She's recently released her debut album Here We Go, has placed third in a television talent quest, is soon to open for one of New Zealand's best known bands and has been discussing a recording deal.

"I am opening for the Waratahs early next month, and I have been offered a record deal in Sydney."

• Kiwi winner
New Zealand musician Kimbra has joined a host of expats who've taken on the Aussies and won.

Hamiltonian Kimbra won the Best Female Artist award at the Australian music awards, known as the Arias, this week.

The debutant starlet picked up the award for the single Cameo Lover (taken from her debut album Vows).

• Bic back
Talented writer, recording artist and performer Bic Runga will be in Dunedin next week headlining the 2011 Classic Hits Acoustic Church Tour. Fans will get to hear not only the old favourites like Sway, Something Good and Get Some Sleep but also her brand-new material, including her first single in five years- Hello, Hello. Hear her at Knox Church, Dunedin, December 6-7. The shows start at 7pm.

• Odd happenings
The controversial rap crew kicked off the Big Day Out bill because of their homophobic and misogynistic lyrics will perform a show in Auckland the night before the one-day festival.

Known as OFWGKTA (Odd Future Wolf Gang Kill Them All) or simply Odd Future, the crew formed in 2007 and have released numerous mix tapes and studio albums, all free at the band's website.

Odd Future, led by 20-year-old mastermind Tyler, The Creator, will play the Powerstation on January 19.