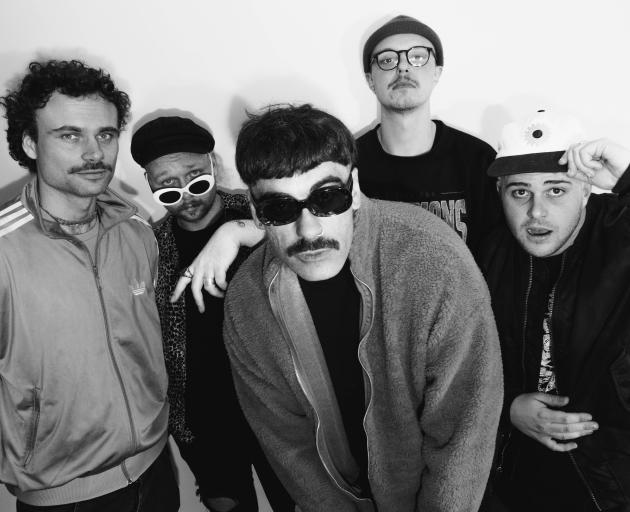 Summer Thieves are playing in Dunedin and Wanaka next weekend.PHOTO: SUPPLIED
Dunedin's Summer Thieves are back into their work after a period of discovery, loss and Covid. Adam Burns talks to singer/guitarist Jake Barton as the band gets ready to return to the South.

Dusting itself off and forging ahead, Summer Thieves continues to be a restless unit, with new music, either completed or in the works.

Hailing from St Clair, the five-piece has just served up a new EP titled Bandaids and Lipstick, the band’s first release since it unleashed its debut full-length, Warped, in 2017.

There is a sense of renewal for the collective as it gleefully goes about its business following a challenging period.

Summer Thieves is essentially picking up where it left off after its late summer hurrah.

10 new tracks during the lockdown.

"It worked out really good because we couldn’t go anywhere and we were just forced to write," singer/guitarist Jake Barton said.

However, it has not been without hardship for Barton.

Last weekend, he joined Laughton and Francis Kora and Tiki Taane in a tribute performance at Mt Maunganui for friend and musician Aaron Tokona (Weta, AHoriBuzz, Fly My Pretties) following the sudden death of the prolific musician in June.

"We all lost someone over eight weeks," Barton said.

Summer Thieves’ broad and breezy sound has enabled the quintet to support some big live drawcards, from Peking Duck, Hermitude and Sticky Fingers to hip-hop heavyweights such as De La Soul and Macklemore and Ryan Lewis.

It has also been a regular on the summer festival circuit since forming nearly a decade ago.

Like Six60, the band plays a similar medley of stylistic touchstones, delivered with all the feel-good idleness of a backyard barbecue.

Despite the band’s crafty knack for all-embracing summer anthems, Bandaids and Lipstick signals an even more far-reaching musical horizon.

Barton said the latest batch of tracks was more of a foray into pop music production.

There is also a clue to the band’s more refined chart sound in the EP’s title, Barton said.

"The lipstick is kind of representing the poppy side that we’re going into.

"And the bandaids is kind of like the opposite, the rougher side.

"On this particular one we were initially only going to do just a few singles with Alex [producer Alex Wildwood] and then we banged out a few extra ones."

While their previous work captured the band’s live energy, the singles on Bandaids are sharpened and tightened without compromising the band’s infectious bounce.

However, for a band that is constantly evolving and spreading out, band devotees should not get too comfortable.

"With every project we try and go in a new direction," Barton said. "The next album is going to be a whole new feel."

Barton added that the next release, slated for later in the year, was going to be "more rawer".

Bandaids and Lipstick is out now.