Tuscoma plays at the Crown Hotel on Friday. PHOTOS: SUPPLIED
Wellington blackened post-metal-gaze duo Tuscoma released Discourse, its highly anticipated second album in April - only to have its national and global tour cancelled due to the ongoing Covid-19 pandemic.

Now, they’re heading back out on the road to tour one of the only places where live music is still a thing - Aotearoa.

Fraser Thompson caught up with guitarist and vocalist Kurt Williams.

Your last album was released just before lockdown. How did lockdown affect that?

Massively bro, massively. Yeah, we had a European tour lined up and the UK, and possibly America and Canada. Then as soon as that hit we decided well, that’s basically this album over by the time things go back to normal, you know, you can’t tour an album after a year and a-half. So yeah, all that time and effort of making that album is kind of like ... Well, we’re just calling it a background album.

So your global tour is obviously not possible, but you’re still doing a national tour, which is cool because we’re, like, the only country where people can do still do that.

Yeah exactly, our friends in [US band] Deafheaven are quite envious of us.

On this record, you had the bassist from Deafheaven. How did that happen?

When they came to New Zealand last year, we supported them in Wellington and Auckland and just got to know them very well. It’s through Jack Shirley, who does all the producing and recording — he produced our first album Arkhitecturenominus — so yeah, we got to know them very well on tour. We were meant to go to GodCity to do it. You know, GodCity, Kurt Ballou’s [Converge] studio? We were meant to go to Boston to do it and then Chris just was like "hey, I’ve got an idea, I’ll come out to New Zealand, if you’ve got a good studio out there".

We just had a whole album written and when we went into the studio we said to Chris this is how we want to do it, and he was like "that’s cool". He came out a week before we started recording, came to practices and had a listen, got an idea of it, he saw us play those two shows with Wolves in the Throne Room. He had a good understanding by the time we got in the studio, and then he had like two days to learn the bass parts. Having someone of that calibre on our album was pretty crazy bro.

How would you say you’d describe your music?

It’s black metal in a sense that we’re blasting and it’s pretty black, but it’s not traditional first, fourth or 25th wave. You know how they’ve got all these waves in black metal? I guess we approach it pretty differently. Blackgaze is more your Deafheaven or Alcest and stuff like that. We’ve approached it with a bit more, I dunno, not hanging back, but keeping it in the mix, if you know what I mean? Joe’s more of a death metal guy, like, you know, death metal orientated background, and I’m like not a metalhead at all, I’m into proper shoegaze, like Slowdive and My Bloody Valentine and early Blur. And that’s why it’s not like black metal as such.

In general, what is your attitude towards genre and labels and that sort of thing?

Genres? I just reckon, like, yeah, if you want to fit into a genre go hard man, but we don’t really think of genres much, we’re not like hey, let’s write a death metal album or let’s write a black metal album, we’re like, you wanna blast? Yep, sweet as, I wanna play this, and then we just create, you know what I mean? Like, we’re writing new music at the moment because Discourse is just a background album, we’ll take a year to write this and by the time we record and stuff like that the world will be back open again. This new stuff is more, I would say, more actually black this time. It’s more straightforward, yeah. 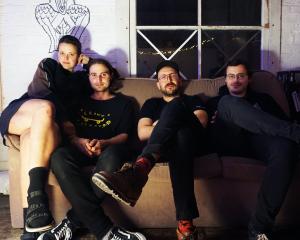