About being 'true to the site'

The Dicey’s family vineyards in Bannockburn. Photos: Supplied
A family project, Ceres, a boutique Bannockburn winery, is achieving  accolades on the world stage. Viv Milsom takes a look at its winning streak.

At just over 10 years old, Bannockburn winery Ceres is bringing home the silverware on the world stage as well as at home.

Ceres Composition Pinot Noir 2015 has been awarded ''Best in Show'' in the 2018 Decanter World Wine Awards, the largest and one of the most influential wine competitions in the world. 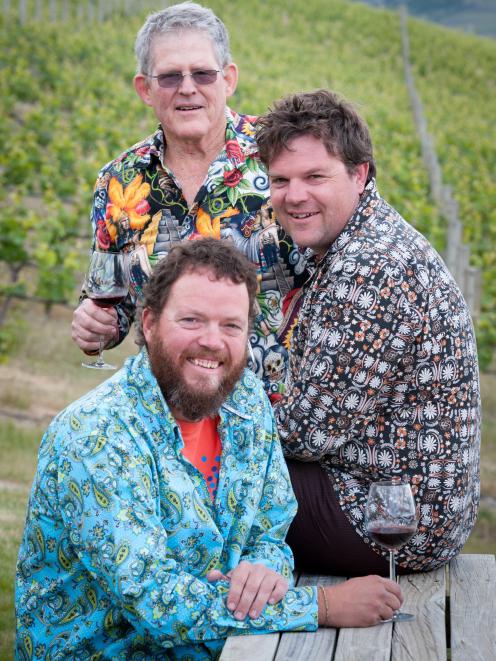 Robin Dicey and his two sons, James (front) and Matt.
Ceres is a boutique winery, and Chris Yorke, global marketing director for New Zealand Winegrowers says winning this ''Best in Show'' is ''a great achievement for a small but up-and-coming winery from Central Otago''.

Named after the Roman goddess of agriculture, Ceres is also the region in South Africa where the Dicey family came from originally.

Based in Bannockburn, Ceres sources its grapes from four of the local Mt Difficulty vineyards that the family owns: Full Circle, Swansong, Black Rabbit and Inlet. Its first commercial vintage was 2006.

Making just 1500 cases of wine, Ceres is all about quality and making wines that reflect the vineyard and the season.

''We try to be as true to the site as possible. With high-quality grapes, minimal intervention is necessary in the winery. We want to create wine that is the voice of the vineyard,'' says James, who works closely with his brother Matt in both the vineyard and the winery.

Around 70% of Ceres' production is pinot noir, with riesling and pinot gris making up the balance.

The winning Composition Pinot Noir 2015 was made from a blend of 30% grapes from Black Rabbit and 70% from Inlet, with wild yeasts being used in the fermentation process and the wine being aged for 12 months in French oak.

Like pinot noir, riesling, one of the world's classic white wine varieties, is also very expressive of both site and season. This again means having a focus on what happens in the vineyard, so that in the winery minimal intervention is necessary to achieve a harmonious balance in the wine.

Developed back in the early 1990s, Bannockburn was the first Central Otago sub-region to be planted in the Cromwell Basin. This means that the vines which were planted earlier on are starting more and more to reflect the different soils from around the sub-region. Although it covers a relatively small area, Bannockburn has very differentiated soil types, which means grapes from different vineyards will produce wines with different flavour profiles.

''The answer lies in the soil,'' says James.

Ceres is a fully sustainable vineyard and is in the process of converting to organics.

''We want to be good custodians of the land,'' James says.

''We are one step on the journey. We are doing this for our grandchildren and beyond.''

Entering wine competitions is not cheap. It can cost thousands of dollars, but for the Dicey family it is all about benchmarking their wines internationally, as well as nationally.

In a crowded marketplace, success in the most prestigious competitions gives both the trade and consumers confidence that you are ''walking the talk''.

The Decanter World Wine Awards are well trusted for their rigorous judging process, with this year 275 international wine experts, including 59 Masters of Wine and 25 Master Sommeliers from 33 countries, gathering in London for two weeks in May to blind-taste nearly 17,000 wines.

Now in its 15th year, the central purpose of this competition is to reward quality, but it also offers smaller producers without marketing budgets the opportunity to be more easily recognised internationally, and helps put new countries on the wine map, as well as providing authoritative recommendations to consumers.

The Sommelier Wine Awards are another major UK-based wine competition, one in which all the judges are involved with either buying or serving wine or consulting to the industry.

This year Ceres Artists Collection Inlet Pinot Noir 2015 and Ceres Swansong Pinot Gris 2017 both made it on to the Gold List, the ultimate wine list for the UK on-trade - hotels, bars, restaurants and pubs.

''There is an element of luck and good fortune in doing well in competitions,'' James admits.

But when a wine wins accolades at home and internationally, it would seem there is rather more than good luck involved.

As James says, quoting Baron Philippe de Rothschild, ''Winemaking is really quite a simple business - only the first 200 years are difficult''.

Alongside national and international competitions, wine producers rely on wine writers to help promote their wines through ranking, describing and commenting on them in the media.

In February this year Cuisine magazine rated Ceres Composition Pinot Noir 2015 #3 in its Top 10 New Zealand Pinots, giving it five stars. Unanimously impressed, the judging panel described the wine as exuding ''a perfume evocative of dark roses and violets, which leads to a deep, still pool of superb fruit''.

It is a wine that ''offers layers of flavour, vibrancy and completeness''.

So what does it cost to enjoy drinking these award-winning wines? While not the cheapest on offer, Ceres' wines are by no means the most expensive either. The whites can be bought online for $27.95 and the pinots for $35.