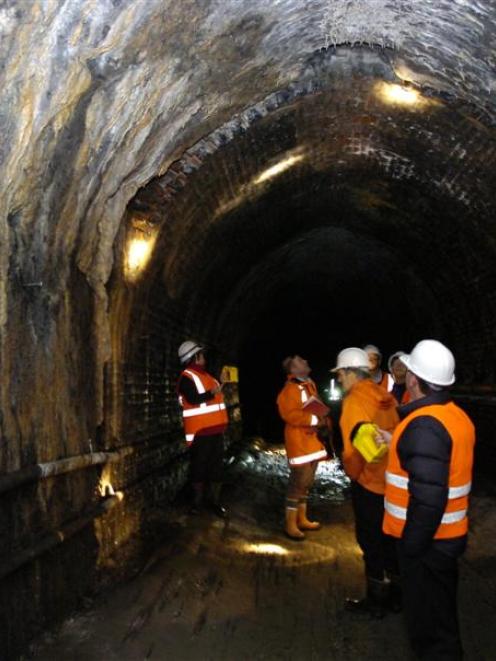 City councillors walk through the Caversham tunnel.
The thought of being able to cycle between Dunedin and the Taieri Plain through two old railway tunnels is never more appealing to cyclists than when they are chugging up the Caversham hill. That hill and the Chain Hills and Saddle Hill are substantial barriers between the city's expanding cycling network and the flat places beyond. But those who would like to go through the hills rather than over them face another substantial barrier - the cost. Mark Price reports. 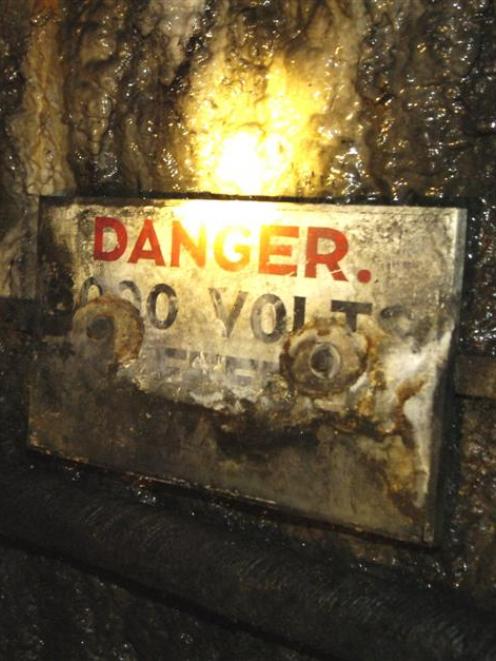 Wet cables...
So, a consultant's report saying a flat cycleway to the Taieri is possible via two old railway tunnels BUT the cost will be $7.72 million creates an instant and obvious cost-benefit dilemma.

Would I use it? Do I want to pay for it?

For the 96 years prior to 2006, there was no such dilemma, simply because the disused rail tunnels were open to the public.

Sheep were driven through the Chain hills tunnel. 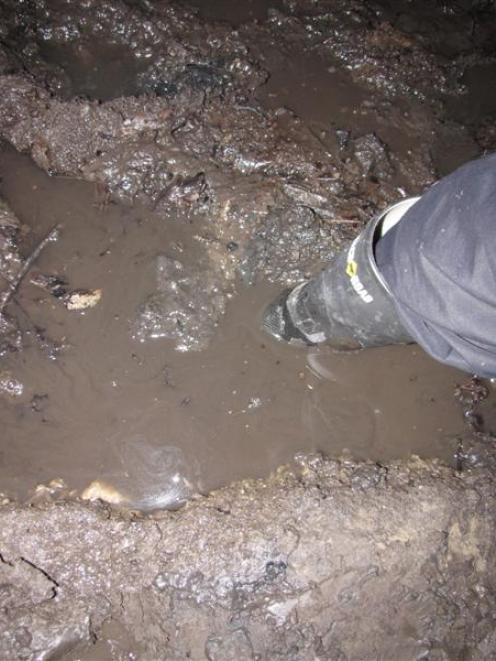 "[The Caversham tunnel] was getting wet and mucky and so I asked them to see if they could fix the drainage.

"They assessed it and decided, "no, it's better to gate it up".

Five years on and, as a founding member of the Dunedin Tunnels Trail Trust, he is on the council working party spending $100,000 investigating whether the tunnels could or should be reopened. 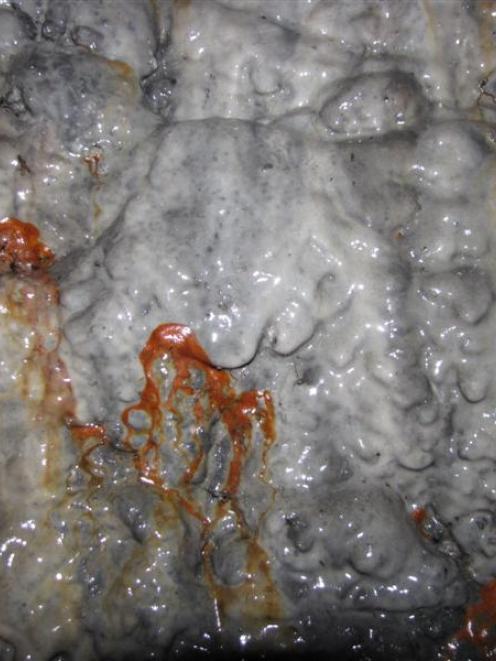 ... & wet walls.
This week, that work involved a walk-through of the 865m-long Caversham tunnel by working party members, council staff and, at the working party's invitation, the Otago Daily Times.

At the Kaikorai Valley entrance, and equipped with hard hats, fluoro jackets, torches and gumboots, we listened to council civil operations team leader Mike Perkins run through the hazards we might encounter underground.

There was the risk, he said, in touching one of the two 6000v electricity cables, of a brick falling on our heads, of a high-pressure water main bursting or of asphyxiation or explosion due to methane or hydrogen sulphide gas. 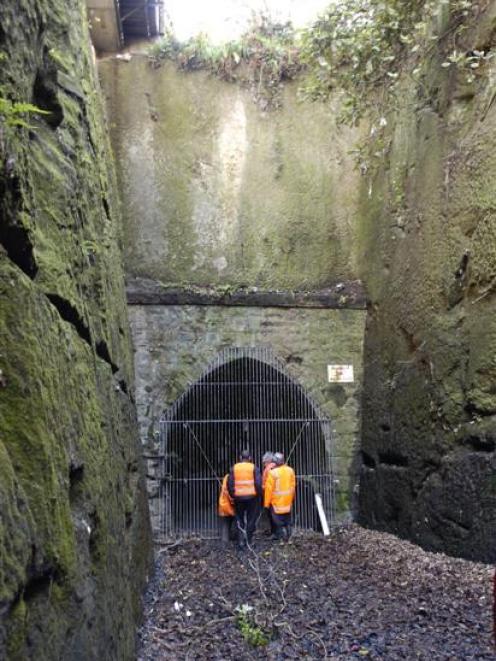 Councillors examine the entrance to the Caversham tunnel. Photo by Mark Price.
The most immediate risk, as we entered the tunnel, was of slipping on the uneven floor and falling face-first into the 20cm-deep pool of muddy water that stretched for 150m.

Mr Perkins explained a day or two after a shower of rain on Lookout Point, once the water had percolated through the sandstone, the tunnel had its own underground showers.

On Tuesday, there were no drips from above, although water ran down the walls, which are covered in places by weirdly shaped brown, yellow and white mineralisation.

Baby stalactites - 140 years old and no bigger than a 100mm nail - hang from the ceiling but otherwise the tunnel is relatively featureless; no bats, no glow worms, no creepy-crawlies.

The tunnel's builders in the 1870s gave most of it a one in 66 slope down towards the Caversham end, but whatever drainage system they provided for the flat stretch at the Kaikorai Valley end, it is not working properly.

That is one problem that would need to be resolved before the tunnel could be reopened.

The other problems are to do with the council services that run through the tunnel.

Water and sewerage pipes are buried in the tunnel floor, an lpg gas pipe runs down one side and two electricity cables down the other.

Working party chairman Cr John Bezett and party member Kate Wilson are confident the electricity cables could be covered to make them safe.

And the same applied to sewer manholes where poisonous and flammable hydrogen sulphide might escape.

Sealing those, explained Mr Perkins, would be a big job.

His boss, waste services manager John Mackie, has warned of the dangers of gas build-up in tunnels - most recently in June after an Auckland water maintenance planner was killed in a gas explosion.

Mr Hyland believes the risk can be eliminated by draining the tunnel, sealing the council pipes and allowing the breeze to keep the atmosphere safe for walkers and cyclists.

Certainly on Tuesday there was a refreshing southerly blowing through the tunnel towards the Caversham end.

As a schoolboy, Mr Bezett used the tunnel countless times.

"From Green Island to King's High School in South Dunedin it was a 20-minute ride. It was easy."

Others using the tunnel at that time included workers at the Burnside freezing works and abattoir who walked from their Caversham homes.

He considers once safety issues in the tunnel had been addressed, the main task would be levelling the floor and laying a bitumen track.

There is no doubting his enthusiasm for the full $7.72 million cycleway from Dunedin to the Taieri.

"Putting funding aside, it's the best one."

Mr Bezett said the message he took from public consultation over the council's new cycle network was that parents wanted safe places for their children to ride.

"Dedicated cycleways is one of the ways kids can get around in relative safety."

Cr Wilson said she could see the benefit of better cycling links between Dunedin and the existing and proposed rail trails of inland Otago.

She considered, however, a minimalist approach for the Caversham tunnel.

"I think it's an absolutely brilliant tunnel. I loved it.

"Given the history of it, you wouldn't want to do too much to it."

Cr Wilson said her views on lighting the tunnel had changed as a result of the visit and that "half the charm" was the darkness.

"You wouldn't want to overlight it."

One of the risks explained to the working party before it entered was claustrophobia.

The tunnel must have been a smoky, noisy, tight squeeze for the steam locomotives it was built for 138 years ago but on foot, with a torch and without locomotives, there was plenty of width and plenty of height and reassuring signs of daylight in both directions. And there was no sense that the ceiling was about to cave in.

Cr Wilson considered CCTV cameras would keep tunnel-users safe from crime and she noted users of the Central Otago Rail Trail had been passing through tunnels for years without incident.

In the end, members of the working party had a solution for every conceivable safety issue.

But, in addition, there is the money issue and the willingness or otherwise of councillors to back the project.

The cheapest Dunedin-Mosgiel cycleway option identified by consultants Opus last year [aside from the "do minimum" option] would cost $1.66 million.

That option would include the Caversham tunnel but not the one at Chain Hills nor a dedicated cycleway in between.

While the council has not had the money discussion yet, at its meeting on Wednesday councillors were desperately looking for savings rather than new things to spend money on.

Two expressed their opposition to reopening the tunnels on cost and safety grounds.

He has, he says, people ready and willing to help.