An altered street sign from about the time of the earthquake. PHOTOS: ODT FILES
Dunedin had a sharp reminder in 1974 that it too sits in the shaky isles, writes Paul Gorman.

Dunedin folk were settling into their evening routines on Tuesday April 9, 1974 when, about 10 seconds before 7.50pm, a startling jolt shot across the city, quickly followed by shaking vigorous enough to knock down chimneys, push objects off shelves and black out suburbs. 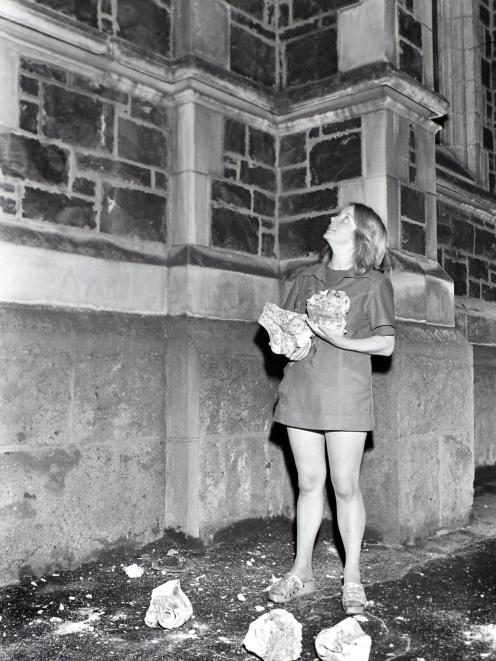 Smashed Oamaru stone from a side spire of Knox Church is held by Mrs Julia Mowat.
There is still some debate among seismologists as to whether the shallow offshore quake, centred roughly 7km south of St Clair, was of magnitude 4.9 or 5.0.

Which fault it was that generated the 12km-deep quake also remains something of a puzzle.

The University of Otago’s chair of earthquake science, Prof Mark Stirling, says there is large uncertainty around the exact location.

Because it was relatively small in magnitude, it didn’t need to have occurred on a major fault, and it is only in recent years that research has been carried out on Dunedin’s offshore Akatore and Green Island faults.

However, "the closest-known fault to the quake is the Green Island Fault", he says.

It was certainly a significant event for Dunedin. GNS Science’s Atlas of Isoseismal Maps of New Zealand Earthquakes up to 1990 states it was the "strongest known to have affected the city of Dunedin since its founding in the middle of last (the 19th) century".

"A large amount of minor damage was caused, and in particular many domestic brick chimneys were damaged."

The most intense shaking, determined by the Modified Mercalli (MM) Scale, was MM7 — "very strong" — in St Clair, St Kilda and parts of South Dunedin, the atlas says.

"These were mainly the southern suburbs on the alluvium between Otago Peninsula and St Clair. Little damage, beyond that to domestic chimneys, occurred even in these areas, but chimney damage was consistent and widespread, and although the standard of construction was commonly poor, the proportion of chimneys in which the brickwork was broken prevents the allocation of a lower intensity."

More than 3000 claims were made to the Earthquake and War Damage Commission, about half of which included chimney damage. There were also claims for cracking of interior plaster and external masonry, and damage to plumbing, household contents and tile roofs.

A report by D.G. Bishop, I.C. McKellar and A.R. Mutch of the New Zealand Geological Survey of the old Department of Scientific and Industrial Research (DSIR) says it was the "strongest yet experienced in the Dunedin area", with a ground acceleration of 0.27 of the value of gravity recorded at St Clair.

"A small foreshock preceded the main shock by a few seconds and it was followed by aftershocks at 8.20pm and 9.50pm," which were later calculated as about magnitude 3.7.

"The main shock was accompanied (many reports state preceded) by a loud roaring noise, and caused considerable public alarm, with telephone circuits being jammed and widespread damage occurring to masonry, particularly chimneys, in the St Clair, St Kilda and Caversham areas. 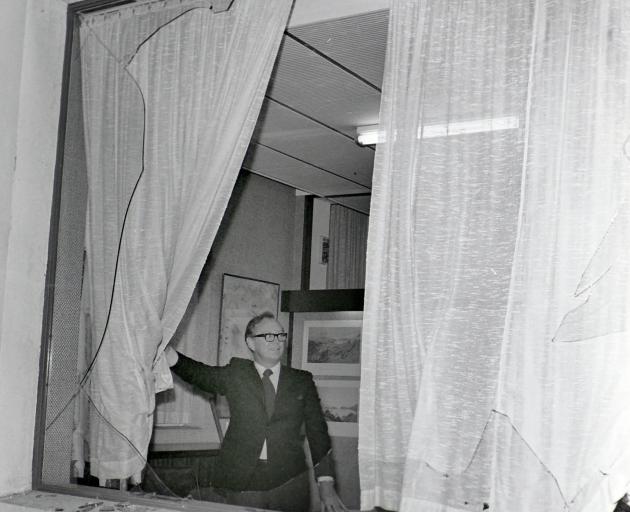 Mr Bill McIndoe pulls back the curtain to survey the smashed plate glass window of his firm's Crawford St printing office.
"Power supplies to Corstorphine were interrupted for 45 minutes when high-tension switches in the foreshore substation were tripped, and all available fire appliances were called out to false alarms caused by the triggering of automatic warning systems."

The authors produced a map of shaking severity based on the number of items fallen from shelves in each of 105 small grocery stores throughout the city and between Taieri Mouth and Warrington.

That showed more than 100 items had toppled from each surveyed shop in a ribbon running from St Clair to Caversham, with a smaller peak (of 16-100 fallen items each) recorded from Tainui to about Musselburgh and generally across St Kilda and South Dunedin.

A similarly smaller shaking peak was evident along the ridge from Lookout Point to Mornington, and continued in lesser strength through Roslyn and up Taieri Rd to Wakari.

Most items had fallen towards the northeast, the direction the quake’s energy spread from the epicentre offshore.

Let’s go back to that autumn Tuesday evening in 1974, when the country was basking in the afterglow of the Christchurch Commonwealth Games and Norman Kirk was still prime minister.

Dusk fell about 6.45pm after a chilly, showery afternoon. Across town, black-and-white televisions and a few colour sets were switched on to catch the weather and The South Tonight at 7.22pm on the single-channel NZBC.

GNS Science principal scientist in Dunedin Dr Simon Cox (then 9) was at his two-storey, double-brick home in Maori Hill with his two brothers and remembers the quake clearly.

"The earthquake struck and the house certainly got a hell of a shake. I remember the windows rattling as it passed through. The house had quite a high chimney but there was no obvious damage to it.

"We didn’t really know what it was, and I guess we went back to whatever we were doing. Very shortly afterwards I recall my grandfather coming down the street from a few blocks away and checking on us — more concerned for us than we were.

"That was the first quake I felt and since then I’ve had a career of feeling them and understanding them," Dr Cox says.

"I was a kid. Our parents were out and we all — four of us — got into a bit of a flap and rushed around the house a bit.

"The other thing I remember hearing afterwards, and I don’t know how apocryphal it was, a teacher took a class of kids down near the water to look in case there was going to be a tsunami."

Dr Cox says a lasting impression of the September 4, 2010 quake in Canterbury was driving through Darfield and seeing big old houses whose chimneys had either toppled to one side or fallen through their roofs, sitting right beside the flue for a new wood burner.

"I’ve often spoken out in Dunedin since, as there are many older villas that have got a chimney that they never use anymore, but they maintain the chimneys for aesthetic purposes.

"So for 30% of their life, residents are sleeping below a tonne of material that could be shaken down with a relatively small earthquake. How many people have essentially got something that could kill them or their family members right above them for a third of their life, the time they are in bed?

"So, given how many chimneys came down in that 1974 quake, we have known all those years that they are not able to deal with much shaking," he says.

Other strongly felt quakes in the city since Scottish settlement in the mid-19th century include the Dusky Sound magnitude 7.8 quake on July 15, 2009; the Darfield magnitude 7.1 quake on September 4, 2010; and the deadly Christchurch magnitude 6.2 (has been recalculated from initial M6.3) quake on February 22, 2011.

The Otago Daily Times archives and clippings of other newspapers kept in the library of GNS Science’s Dunedin office reveal many other tremors have rippled across the city, alarming residents and rattling homes and buildings.

In the Times of December 3, 1957, the quake at 4.40pm the previous day was accompanied by a loud crashing sound.

"In the city a rumour quickly spread that a Russian satellite had landed on St Clair beach. After receiving many telephone calls, a group of reporters hastened to investigate, but only a blank stretch of sand and the rolling ocean greeted them."

This series of features and online content was made possible by a grant from the Aotearoa-New Zealand Science Journalism Fund and EQC. Online content produced and edited by ODT videographer Rudy Adrian.