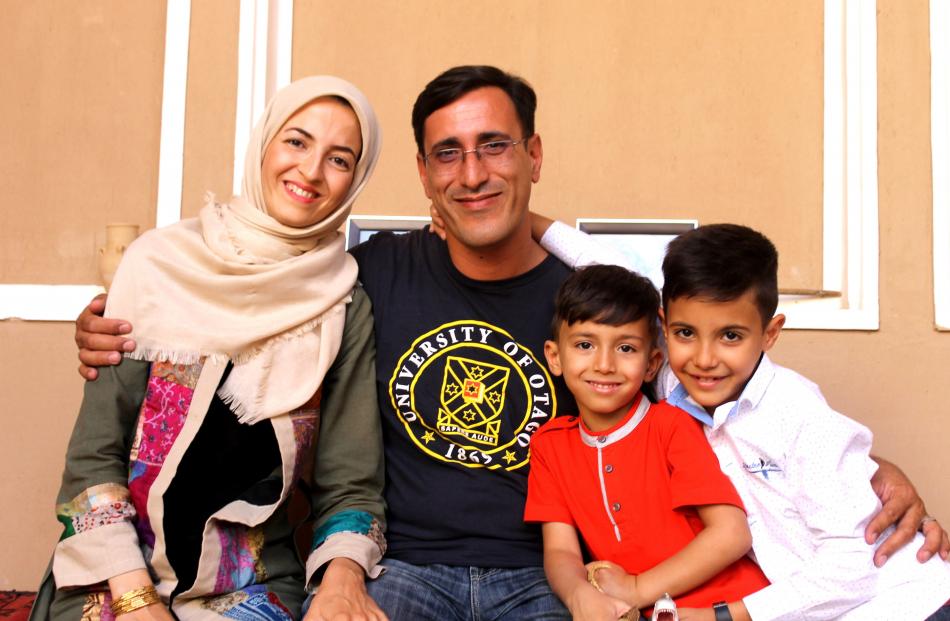 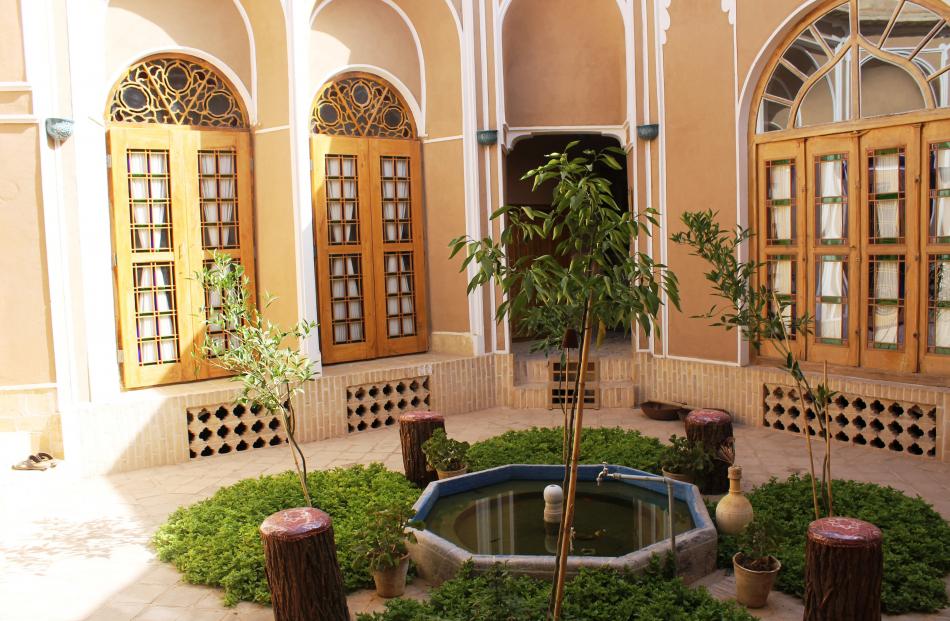 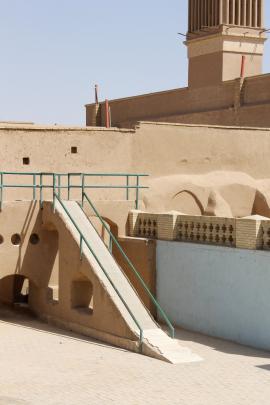 A children’s playground in old Yazd. 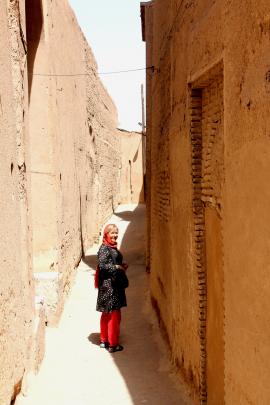 The narrow lanes of old Yazd, where one can be lost for hours. 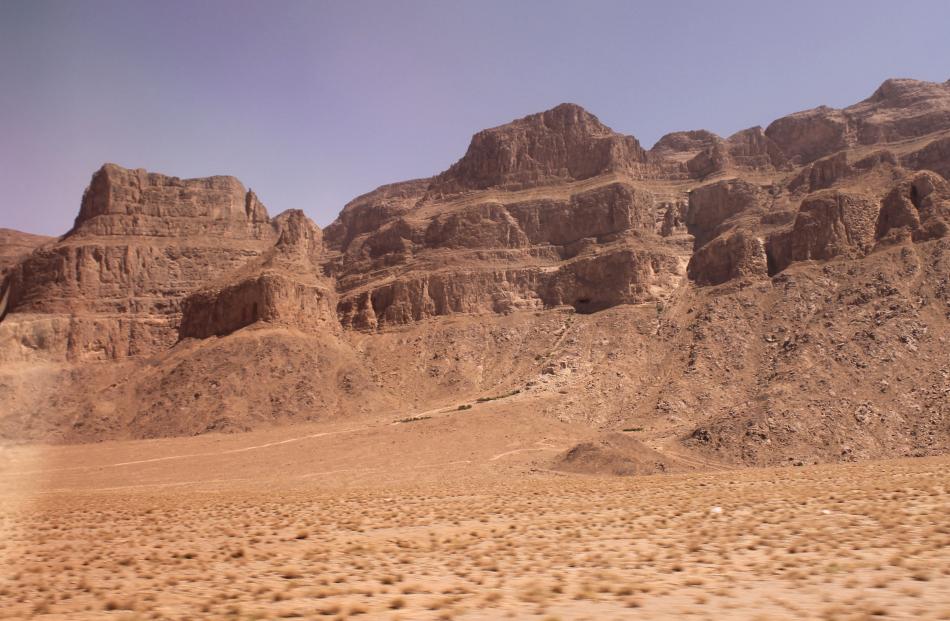 Iran is about as different from Dunedin as it is possible to get.

From Iran to Dunedin is not just a journey of miles. As Diana Noonan discovered, international students who make the trip to study here can make connections that close the distance between the two.

I notice them most in winter, at windy George St intersections: the young women with their hijabs tucked into puffer jackets, and thigh-length tops flapping over jeans; the men sporting beanies against an icy southerly. And always a mobile phone clamped to their ear, chatting, perhaps, to family thousands of kilometres away.

What is it like to forsake those you love, often for years at a time; to journey to a strange, cold land in pursuit of dreams and a coveted university degree? What defines the experience, and at its conclusion, what awaits the graduate on their return home?

Last year, I decided to find out. My destination was Yazd, one of the driest cities in Iran, and home to University of Otago graduate Dr Ali Falahati, his wife Ms Leili Ghanbari, and their two young sons Nima and Aryan.

Sandwiched between the deserts of Dasht-e Kavir and Kavir-e Lut, and flanked by Zoroastrian excarnation towers, the old city of Yazd rises from the very dust it is built from. In summer, temperatures soar to above 40degC; in winter they drop to zero. A maze of winding lanes and high walls punctuated by heavy wooden doors, its access-ways are so narrow as to be inaccessible to all but pedestrians and the occasional motor scooter. Maps are pointless in this labyrinth, where it is perfectly possible for a stranger to be lost for hours.

How daunting then, as a child, to be suddenly deposited in this city of 56,000 inhabitants, and left to walk, alone, from a bus stop to a new school half an hour away. At the age of 12, this was the situation Dr Falahati found himself in.

"I come from a farming background; in fact I’m the only academic in my family. The first school I attended was in a small village in the country, but when I was 12 years old I passed a difficult entrance exam which changed everything. It gave me the financial assistance I needed to attend a boarding school in Yazd. Initially, I didn’t know anyone there. I was completely alone. At school, I learned to wash my own clothes and do my own dishes so I became independent from quite a young age."

That independence was to stand Dr Falahati in good stead several years later when, as a student of molecular biology at the Persian Gulf University in southern Iran, he received a significant invitation.

"I was working on a project in collaboration with the University of Otago. This led to a member of its staff, Dr Mark Lokman, visiting me in Iran. After we’d met, he suggested I come to Dunedin where he would supervise me as a PhD candidate."

Although a scholarship was available to enable this to happen, the decision to take up the offer was far from easy.

"Life was good in Iran. I had an academic job, a wife and a child. Even with a scholarship, we’d have to sell everything we owned to make it work. Friends and family kept asking us why we would even think of leaving. But for me, it was a dream to go to New Zealand to get my PhD, and also to learn more English. So, in 2010, we set off."

Although excited about the adventure, Dr Falahati’s, wife, Ms Ghanbari, remembers it as a stressful time.

"I couldn’t speak any English and I didn’t know anything about life in New Zealand. It was so hard for me to go somewhere completely new and so far from my family."

Fortunately, the welcome the family received on arrival in Dunedin, and the ongoing support available to them, ensured they settled in after just a month. Relatives back in Iran, who had read about countries where people carried guns, were soon able to be reassured that New Zealand was a safe place to be living.

Ms Ghanbari began learning English through the Otago Polytech, with a volunteer tutor (who also advised her on matters of shopping) coming to her house to conduct lessons. When Ms Ghanbari was invited to join Mobat (a "Mothers of Babies and Toddlers" group) she was delighted, but without a pram, and not yet confident enough to take her driving test, getting to the group at first seemed an impossibility.

"I really wanted to go but I didn’t know how I could get there and I was too shy to ask for help. But Dr Lokman’s wife, Kanako, gave me a pram, and then some of the mothers from the group offered to come and pick me up. It was wonderful."

Meanwhile, Dr Falahati was discovering the joys of studying at the University of Otago.

"There was everything I dreamed of in my lab, and if it wasn’t there, my supervisor would get it for me. He was amazing in every way. Our lab was called ‘the international lab’ because there were people from all parts of the world in it.  Our ‘happy hour’ was always a time to try different foods!"

But despite much socialising (the Kiwi concept of "pot-luck" features large in the couple’s many happy memories of Dunedin) life held its challenges, and it soon became essential for Dr Falahati to find part-time work.

"At that time, PhD students could work for 20 hours a week. I was fortunate to find a job with the university, assisting my supervisor. It meant I didn’t have to work at a hotel or somewhere similar. But with work and study, my days were very long. I would wake at 6am and finish very late at night."

Ms Ghanbari, a graduate of sewing and clothing design, juggled childcare with part-time work. However, not being eligible for a government childcare subsidy, the couple soon found themselves less well off than before.

It was when Ms Ghanbari became pregnant with their second child, Aryan, and in the months following his delivery, that she and her husband’s personal strengths were tested to their limits.

"Leili had severe nausea for over eight months. She was unable to do anything and the friends she could usually rely on for support were also pregnant and suffering from nausea. It was too expensive for anyone from our families to travel from Iran to help us so I was working, studying and caring for Nima all at the same time. It was very, very hard."

A happy interlude was a surprise baby shower hosted by Kanako. Ms Ghanbari remembers it clearly.

"Ali drove me to his supervisor’s house. I thought we were going to a pot-luck but he left again, and when I got inside, I found all my friends there. It was a girls’-only night! It made me so happy and it was also very helpful because we had no money to spend on the new baby. In Iran we have something similar to a baby shower, but it’s held after the baby is born."

Dr Falahati and Ms Ghanbari are full of praise for the New Zealand health system.

"Leili still didn’t have much English and we didn’t know what would be expected of her in hospital. When we found our midwife would actually come to our house to give check-ups, we were so happy. Leili told her friends back in Iran and they couldn’t believe it."

Aryan was delivered by Caesarean and Dr Falahati was able to be present at the birth, something that wouldn’t have been possible in Iran, except perhaps in Teheran and a handful of other major cities.

Like all new parents, especially those with a colicky baby waking hourly day and night, the following months were desperately trying and, battling brain fog, Dr Falahati became increasingly concerned about his work. On top of that, the family was now running out of money.

The longed-for break came when Dr Falahati secured a full-time job in the University of Otago’s anatomy department while in the final stages of writing up his thesis. Nima was enrolled at Opoho School and any concerns Ms Ghanbari had about their son fitting in when he had so little English at his disposal, were soon assuaged.

"The teachers were so kind. They invited Ali and me to sit in the back of the classroom and we could see how happy Nima was. He didn’t stop chatting! The New Zealand education system really helped him gain confidence."

Sitting in the courtyard of the Falahati-Ghanbaris’ Narenjestan traditional guesthouse in Yazd (which they now own in conjunction with other family members), I wonder how comfortable they are with the decision they made to return to Iran. Dr Falahati’s answer is decisive.

"We made a mistake: a big one. We should have tried harder to stay in New Zealand. Our families here think so, too. I’m fortunate to have an academic job in Yazd but I can’t expect the same in terms of pay, or access to labs and equipment. It can be very frustrating. It’s also taken time to get used to driving in Iran again. The rule here is: ‘There are no road rules!’."

Ms Ghanbari is quietly confident that the "Western" experience gained in New Zealand will serve them well in their tourism endeavours, and given their accommodation winning the tourism Yazd’s "Best Traditional Guesthouse" award in 2016, it seems she may be right. But, like her husband, she also wishes they could return to New Zealand.

"The lifestyle there suited us. In many ways it was more casual than here. And we worry about Nima. Aryan is happy at school in Yazd but Nima is a quieter child. The flexibility of the teaching style in New Zealand suited him better. He’s lost confidence since we returned."

Due to changes in Immigration New Zealand’s "points system", it seems unlikely that the Falahati-Ghanbari family will be returning any time soon. But memories of their years in Dunedin are warm.

"We don’t forget the kindness we were shown by the people of Dunedin, or the support we were given by the university. New Zealand is amazing!"