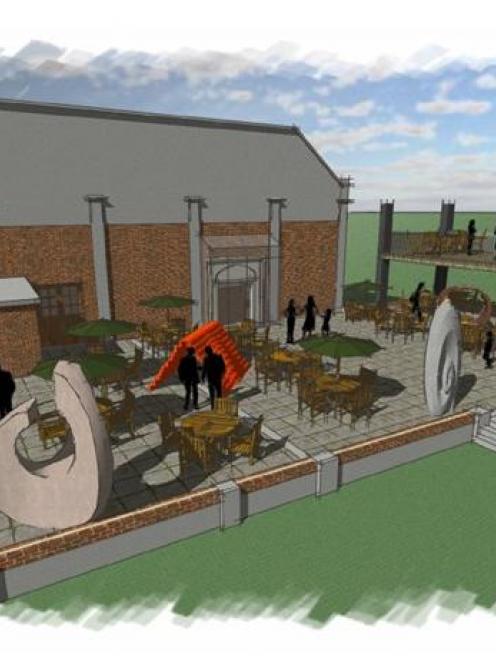 Jackie Gilles' plans for the new-look former art gallery include The Sargood Sculpture Terrace at the northeast corner...
The former Logan Park art gallery is a good example of how heritage significance is not just about pretty buildings, says Jackie Gillies, the architect who has prepared plans for the building's refurbishment.

Few people would use the word pretty to describe the building, a restrained design that was typical of the 1920s and a reaction against the fussy architecture of the late-Victorian era.But Ms Gillies says social and cultural significance are also important.

Love it or loathe it, the former art gallery at the centre of Dunedin's most used sports grounds appears to have a secure future, after the city council gained consent to demolish parts of the building and refurbish others.

The three southernmost bays have already been bulldozed, to allow for extension of the University Oval cricket ground, and later additions built between the 1950s and 1970s will follow. 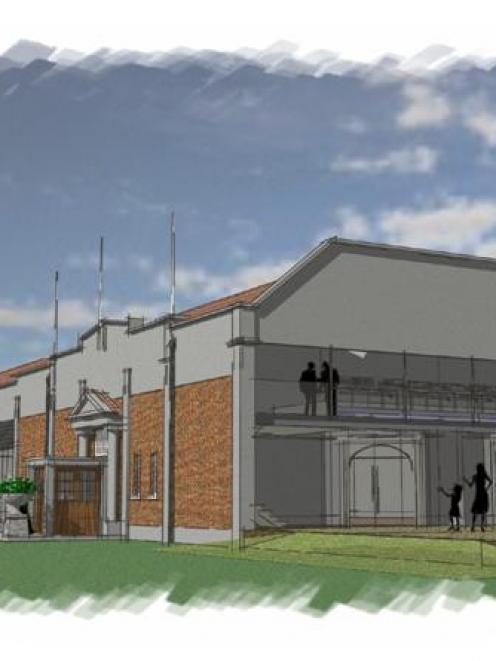 ... and a new spectator balcony and gable at the southwest corner as well as the plans below.
As a trade-off, the council will protect the remainder of the 1925 building and says the large internal spaces lend themselves to functions, either directly associated with sporting events or independent ones, such as wedding receptions.

When sports fixtures are on, the former gallery is likely to be used for viewing spaces, temporary clubrooms, media, catering and prize-givings.

At other times, it could be used as office space by sports organisations, as exam space close to the university or hired out to the likes of yoga clubs and dance schools. Further consents may be required once specific uses are determined.

Ms Gillies, a conservation architect commissioned by the council, says for most people the first impression of the building would be that it is nothing special. 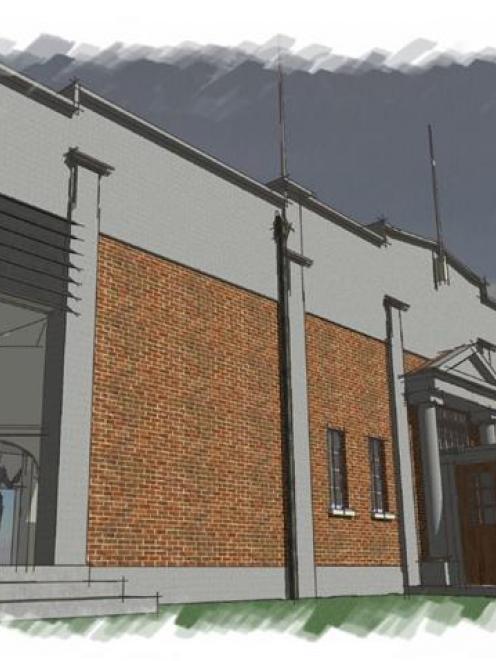 West wall with reconstructed portico. Images supplied.
"It's not a fabulous, beautiful piece of architecture or anything like that. It was certainly a bit drab and unloved.

"But when you learn about the history and the significance of it, it brings it to life. And that revolves around the fact it's the only remaining building from the 1925-26 New Zealand and South Seas Exhibition, which was hugely successful for Dunedin."

When the exhibition closed, a donation by the Sargood family allowed the building to continue being used as an art gallery and the land around it became playing fields.

While the gallery was designed to be inward-looking, with no windows, for obvious reasons, it now needed to relate to its surroundings.

Opened west wall with steel louvres over new glazed doors and fixed window.
"Therefore, what I've shown is the removal of a few solid brick panels and their replacement in glass, so the lovely big spaces inside would be able to relate to the outside and the inside at the same time ..."

Where the gallery has been cut back and a temporary wall erected, Ms Gillies is proposing a terrace at floor level and a small viewing balcony at the upper level overlooking the cricket oval. This should be completed in 2012.

The footprint of the 1951 Sargood Wing will be retained as an outside seating area and possibly a sculpture terrace. Ms Gillies says the council should also consider keeping the wing's curved concrete staircase and balcony as a raised viewing platform.

Old photos will be used to re-create the original entrance portico on the building's western elevation.

The original architectural symmetry of the gallery was lost when two of the original bays were removed in 2002. However, Ms Gillies says she managed to persuade cricket interests not to slice a piece off what was the central octagonal chamber and the main gallery spaces will be retained in their original form.

While the building is basically sound, leaks in the roof and the use of asbestos sheet linings will have to be dealt with.

Modern partitions will be removed, basic services upgraded and the building strengthened. The sprung tongue-and-groove floor is "brilliant" but roof lights and skylights, as well as plasterwork damaged in sports training, will need to be repaired.

"This is definitely a compromise," the Queenstown architect says of the plan.

"In an ideal world, [the former gallery] would not have been reduced in size ... But I'm quite excited about how the proximity of the building to the cricket oval will allow some absolutely amazing views through the building straight on to the cricket ground.

"It was pretty obvious that the alternative might have been that it was lost completely. It was quite precarious, partly because people didn't fully understand its significance and just looked at its appearance."

In recent years, the building has been leased out to sports bodies. However, the Highlanders rugby team has moved out and the New Zealand Academy of Sport (South Island) will move to the site of the new Forsyth Barr Stadium in 2012.

Demolishing the entire building would have been a cheaper option and provided the greatest flexibility for developing the park, Mr Hall says. But the building was registered as a category 1 historic place and had protection in the council's district plan.

"We looked at ways we could change the district plan to enable us to remove it ... changing our rules in this area to make recreation the important thing, rather than heritage. However, you would open a can of worms for other planning zones and heritage buildings ..."

It was at that stage the council asked Ms Gillies to determine which parts of the building were important. She found that the former art gallery had the greatest significance and that the strength of its design had actually been undermined by the later additions.

Mr Hall also acknowledges that the building is the "last link to the significant exhibition held on the ground and a very important family who set a number of major facilities on their course in Dunedin".

John Blennerhasset, of Christchurch, a great-grandson of Percy Sargood, says family members were not happy about any of the building being demolished but what was proposed was a "fantastic compromise".

"A real threat has been hanging over it for a long time ... Thank God a few people knuckled down and saved it, and saved it in a way where everyone gets what they want."