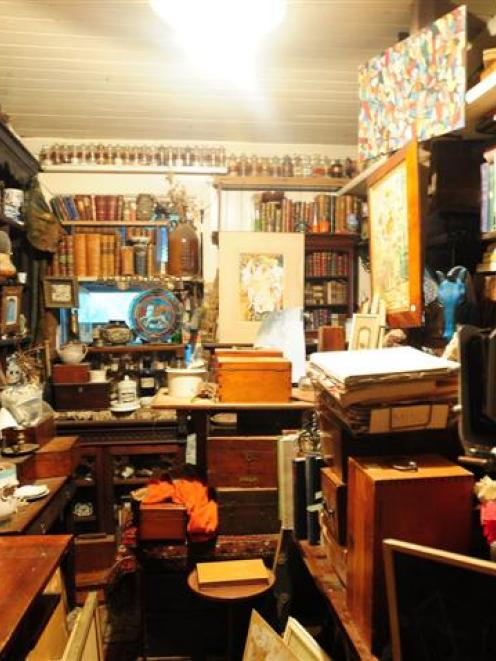 Hardwicke Knight's House in Broad Bay. Photo by Craig Baxter.
The death in August of eccentric adventurer, photographer, and historian Hardwicke Knight severs a fascinating connection between Dunedin and the search for Noah's ark. Otago Daily Times reporter Mark Price was given access to the late Mr Knight's vast collection of books and documents earlier this week, and stumbled across both the tale of the ark and a possible explanation.

And the ark rested in the seventh month, on the seventeenth day of the month, upon the mountains of Arafat.

Those words, from the book of Genesis, are the only clue about where Noah, his seven companions and the animals aboard his "gopher wood" ark landed after surviving the great flood sent by God.

Over the centuries, there have been hundreds of searches for the ark but the results have been, at best, inconclusive.

The stakes are high, as the "deluge" and the ark are major planks in creationist theories that take the words of Genesis literally and suggest the Earth is between 6000 and 10,000 years old and that all life is descended from the ark.

As one of the many websites devoted to the search for the ark states: "There would remain no further intellectual basis for the theory of evolution".

Enter Hardwicke Knight, who while wandering lost in the snow, high on Turkey's Mount Ararat, in the late 1930s, found a piece of wood - an event that would later be used to support the belief that Noah's ark existed.

However, those who knew the Dunedin collector well have revealed an explanation that points to the ark having been something else.

Mr Knight's partner, Ursula Stockinger, says in the late 1930s Mr Knight was travelling in what is now the Republic of Armenia but was then part of the USSR.

He was imprisoned by Kurds for several days but was set free on the Turkish border and left with no option but to cross the snow-covered slopes of Mount Arafat.

Ms Stockinger says Mr Knight was fond of recalling how, lost, exhausted and suffering from dysentery, he survived one night in a cave being kept warm by wolves.

His biographer, Meg Davidson, was told a similar story which had Mr Knight captured by what he described as "common or garden brigands".

As he set out, on foot, for Moscow, he faced "very inhospitable" terrain and was soon in deep trouble.

There were gale force winds, lightning, snakes, bears and ravines and Mr Knight believed that, but for the wolves in the cave, he would have frozen to death, although he did not rule out the possibility that the wolves were an hallucination.

But it was events the next day that would secure him a place in the history books.

Mr Knight stumbled over some wood he reportedly described as "dark, water-logged timber" he thought might be from a gun carriage. He thought of Hannibal, and broke off a piece, and put it in his pocket.

In correspondence later, Mr Knight was quoted as saying the wood "reminded me, when I felt it, of the forest trees said to be prehistoric which are submerged by the sea and appear at low tide at Walberswick on the Suffolk coast of England, or of the timbers of a Spanish galleon that are exposed in a similar way at very low tide on the Welsh coast."

Ms Davidson said what happened to the piece of wood was uncertain. Mr Knight told her it had crumbled to dust in his pocket although she thought that seemed implausible.

Ms Davidson spent many hours interviewing Mr Knight for a biography she hopes to finish next year. She considers he did not think the wood came from the ark.

However, he did believe there was a flood and that Noah was an historical figure who lived on, or near, Mt Ararat.

Mr Knight "would have liked to believe" the story of Noah's ark and although he had "left the church", to his family's disgust, he held a "romantic attachment to Bible stories".

In Dunedin's Evening Star, in 1978, Mr Knight wrote that the poetry and symbolism of the Genesis story aside, "we find a perfectly logical record of a tribe that had premonition of a flood, who saved their herds and their own lives while others perished . . ."

But, he suggested, because the word "ark" had different meanings, Noah's ark might not have been a ship.

"The word may come from a root which signifies to dwell or inhabit, and may therefore denote any building, and is used to signify a chest with a cover."

"It is not difficult to read into the Genesis story, Noah's building of a large shelter into which he took his family and his herds, constructed on the mountain-side above the level of the flood and where the grass would remain green in the summer."

Ms Stockinger says Mr Knight often spoke about the origins of the piece of wood he found.

"It might have been part of a byre. A cow byre. That's what he thought."

That interpretation, however, did not make it into the 1972 ark text book - Dr John Montgomery's The Quest for Noah's Ark - which describes the ark as "essentially a huge box" designed to stay afloat for a whole year.

There, Mr Knight's find is described as "evidence which strongly suggests that the remains of Noah's Ark are still on that mountain".

Ms Davidson said that in the late 1960s "ark fever was at its height" and several competing groups were searching Mt Ararat.

Mr Knight was flown there by American explorers from the Seventh Day Adventist Church but he did not consider other members of the party were fit enough to cope with the conditions on the mountain and the party did not reach the place where he found the wood.

That seems to leave the way open for a modern explorer to follow in Mr Knight's footsteps. His directions to the site are contained in The Quest for Noah's Ark.

Mr Knight encountered the wood after passing Lake Kop on the northern side of Mt Ararat, after traversing one icefield and then skirting below a second where he was confronted by "one of the greatest and ugliest chasms in Mother Earth" - probably the Ahora Gorge.

"All around was the stony rubble that had rolled down the mountainside.

"Timbers extended in more than one direction; some were parallel and others perpendicular to them.

"The timbers could have been massive regular beams, although all I could see was the tops of them exposed level with the surface of the ground and it was not possible to tell how far they extended under the stones."
- FREDERICK HARDWICKE KNIGHT
A brief history of a long and busy life

• Saw aerial dogfights and Zeppelin in flames over London during World War 1.

• Photojournalist in Moscow during the Stalinist purges.

• Registered as a conscientious objector at outbreak of World War 2.

• Trained as a nurse with the Friends Ambulance Unit.

• Chief photographer for the Plastic Surgery Unit from 1942-47.

• Appointed director of medical photography at the University of Otago in 1957.

• Elected president of the New Zealand Institute of Medical Photographers in 1965.

• Te Papa acquired 20,000 items from his collection of photographs, albums, antique cameras and books in 1991.