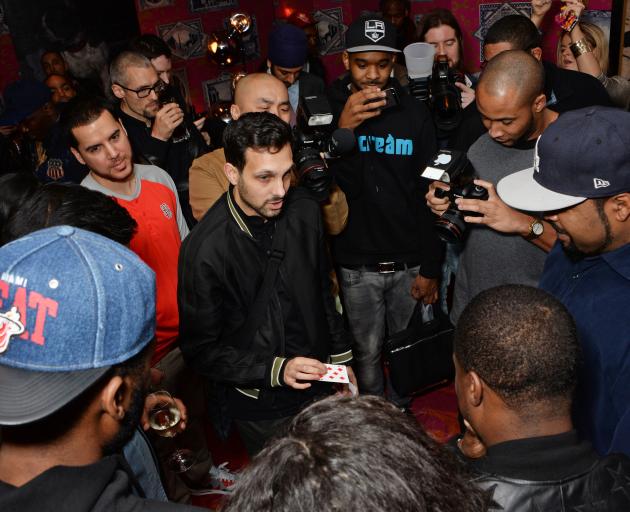 Dynamo performs for a crowd, still hoping to inspire. PHOTO: GETTY IMAGES
In a world of deepfakes and augmented reality, has magic lost its power to thrill? asks Sam Wolfson.

Midnight in Tokyo. I’m standing in a narrow alleyway behind one of the hostess clubs in the capital’s red-light district. A large screen displays live updates of the gender balance inside, currently: ladies 113, men 87. Just around the corner is a famous hangout of the yakuza gangs, where a few months earlier there was a bloody shootout and a Korean crime boss was killed.

Dynamo, one of the world’s most successful magicians, is used to performing in edgy atmospheres: he’s done street magic for gang members in LA’s Compton, and illicit tricks in Saudi Arabia where magic and the supernatural are banned and punishable by 40 lashes. But Tokyo is the one he’s always dreamed of, especially after he saw Fast and Furious: Tokyo Drift in his 20s.

We’re not really in any danger. These days the area is frequented by tourists searching for a sanitised version of seedy and, besides, we’re with a crowd of people 15 deep. But magic has always thrived on the impression of peril. The most popular early illusions involved sawing women in half or being shackled while submerged in water. More recently magicians, such as David Blaine, have tried to push the human body to its limit. Derren Brown has managed to raise the stakes further not just by appearing to endanger his own life, as he did when he played Russian roulette on live TV, but those of his subjects.

But, increasingly, the idea of making a spectacle out of death and misery seems out of step with our post-truth world. British science fiction writer Arthur C. Clarke famously wrote that “any sufficiently advanced technology is indistinguishable from magic”, a statement normally considered to be about the wonder of scientific advancement — but it could also be about the redundancy of magicians.

"The technology that comes out is so fascinating and moving at such a rapid pace that it’s so hard to comprehend what is going to be out in the future," says Dynamo when I ask whether people are more amazed by human magicians or virtual achievements. "But I don’t think there’s any piece of technology out there that is more advanced and can grow more than the human mind. The technology that’s getting developed, it starts off as an idea in someone’s head. And that’s what magic is. It’s taking something that just starts in your mind and bringing it to life."

Gustav Kuhn, a former magician turned psychology professor, has spearheaded examination of magic as a field of science. He’s interested in the places magic, clinical psychology and the modern world overlap. In one recent study, for example, he got a "medium" to claim they were talking to the dead relatives of an audience of undergraduate students. Using magical trickery, he was able to guess correctly some of the things the students were thinking.

This, he says, has a big impact on the way we think about fake news. It’s not merely enough to tell people it isn’t real, to factcheck — people ignore that information. Only when we are told how a trick is done do we stop believing in it.

For Dynamo, the distorted dangers of magic and the jeopardy of real life have become inexorably linked. Just a few years ago it seemed he might never make it to Japan. Having suffered from Crohn’s disease his whole life, in 2014 a complication caused by a bout of food poisoning meant he was hospitalised for months with chronic pain and a series of worsening symptoms, including arthritis that affected every joint in his body and meant even some basic tasks, never mind sleight of hand, were impossible.

While we’re waiting for shooting to reset, he tells me that although he experienced "the worst pain ever" during those months, he never lost focus on magic — coming up with more than 250 tricks and even learning Japanese from his hospital bed. When he was eventually discharged, he looked unrecognisable, his face and body bloated and swollen, a result of the medication. But with the help of rehabilitation he was able to relearn the fundamentals of his craft. Now, at 37, he’s finally made it to Japan. When he arrived a few days earlier, he was met by hundreds of screaming fans at the airport, a sign of his global appeal. Now he says he worries less about the damage trickery can do and thinks more about the hope it can inspire.

He was raised in what he describes as "quite a broken home". His father was in jail for most of his young life. He was close to his mother, but she was only 16 when she had him and was also trying to sort her own life out. He was raised by his grandparents and great-grandparents, but says he mostly spent a lot of time alone, on his Bradford council estate. Once he got to school, he was bullied relentlessly, in part because of his size, but also his father’s Pakistani heritage. "I was beaten up quite a bit, because I went to quite a racist school — being of mixed background, you know."

His grandfather’s magic manuals and the comic books he used to collect provided an escape route, and he was drawn by the super-powers he found in them. At that age, the magic of fantasy fiction and the trickery of illusion were hard to distinguish. "We didn’t have a TV licence, but the local video store gave me a VHS player. So I used to watch everything. Back then I didn’t comprehend the difference between a documentary and a movie. So I was watching these superhero movies, believing it was a real-life story. That gave me belief in myself, that I wanted to grow up and be like that when I was older. Before magic, I didn’t know who I needed to be, who society wanted me to be as a person. I didn’t totally feel comfortable being myself, because I didn’t feel that I belonged into any particular group. I felt like an outsider."

Dynamo agrees with Kuhn that magic can be powerful, and that power has to be wielded responsibly. But he sees his own belief in superhero-like powers changed his life, and he wants to create the same effect, especially for young working-class kids who had an upbringing like his.

"It’s hard to know what to believe, in this day and age. And whether people want to believe what I’m doing is real magic or skill, it’s totally up to them. But I want to inspire the kid who’s living in Bradford now on a council estate and who feels there’s no opportunity for him. He doesn’t know if the country is going to be in a position to provide for him in the future."

The following day, we head out of the city to a car show in an old racetrack deep in the suburbs, where throughout the day families wander around as rich Japanese men in their early 20s arrive in souped-up cars, find a spot and pop their bonnets to show their engines and the boots to show their sound systems. You can see why Dynamo chose to film here, it’s real-life Tokyo Drift.

As night falls, Dynamo gets ready for the big stunt. First, he gets four of the boy racers to line up and try to push him over — the four of them should easily be able to topple him, but as hard as they push, Dynamo is able to hold steady. Then he ups the ante and gets one of the guys, who can’t be older than 20, to get in his sports car and floor it with Dynamo standing right in front. The guy starts revving, first a little, then a lot. Dynamo is holding the car back with his hands. The wheels are spinning, but the car isn’t moving. Suddenly, Dynamo jumps out the way and the car zooms to the other end of the lot within seconds.

In the past when I’ve watched these shows, I’ve felt uncomfortable — a good magician is a confidence trickster, someone who makes you believe the impossible.

But it’s after the trick is over, when Dynamo has left and the cameras are packed away, that I become a true convert. I spot the guy whose car it was. He’s still agog, bent over staring at his own tyres, trying to work out what just happened. At one point he just looks up at the sky, as if the answer might be in the stars. I start to believe in the magic of magic. — Guardian News and Media