Rare in all its forms 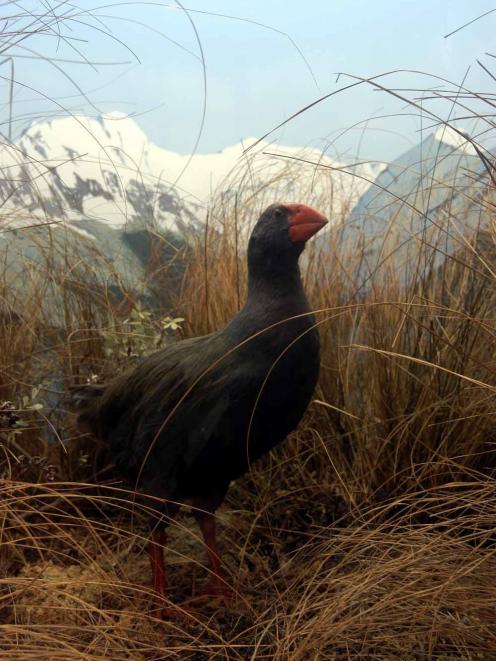 The story of the South Island takahe is one of conservation and survival.

Once thought extinct, the takahe was rediscovered in 1948 by Invercargill doctor Geoffrey Orbell in Fiordland's remote Murchison Mountains.

In the decades before Orbell's discovery, Otago Museum was home to two specimens of this enigmatic bird.

At the time, these specimens were considered some of the last surviving in the world.

Currently on display in Otago Museum's Gifts and Legacies exhibition is a near-complete takahe skeleton.

It was collected in 1884 by Richard Henry, one of New Zealand's earliest conservation rangers.

An Irishman, Henry first found work in New Zealand as a rabbiter, and later became a guide and explorer at Te Anau.

Keenly interested in native birds, he studied the decline of species such as kakapo, whio and kiwi.

He undertook a historic relocation of more than 500 flightless birds to Resolution Island reserve after being made its first caretaker in 1891.

Henry found the takahe bones scattered in a small patch of scrub near Lake Te Anau and painstakingly collected them to donate to the museum.

The skeleton has been delicately arranged underneath a glass bell jar and was the most complete takahe specimen in the museum's collection until 1898, when a Te Anau dog made a ground-breaking find.

On the shore of Lake Te Anau, musterer Jack Ross took his dog, called Rough, for a walk.

Rough disappeared into the scrub and returned with a young female takahe in its mouth. Despite Ross' best efforts to revive it, the bird died.

He quickly organised its delivery to Otago Museum curator Prof William Benham, who taxidermied the takahe skin to make a mounted specimen.

Before the takahe was rediscovered in 1948, there were just four mounted specimens in the world: two in the British Museum, another in Dresden and a fourth - the only specimen to remain in New Zealand - in Otago Museum.

The takahe caught by Rough, now on permanent display in the Nature Galleries, was the last specimen collected.

For many years it was the only takahe mount on display anywhere in the world.

Today, there are roughly 200 takahe living in Fiordland, under constant pressure from pest predator species and habitat loss.

The takahe specimens in the Otago Museum collection are a tangible reminder of why we need to conserve our living species, and their fate if we do not.