Time called at the 'Gardies' 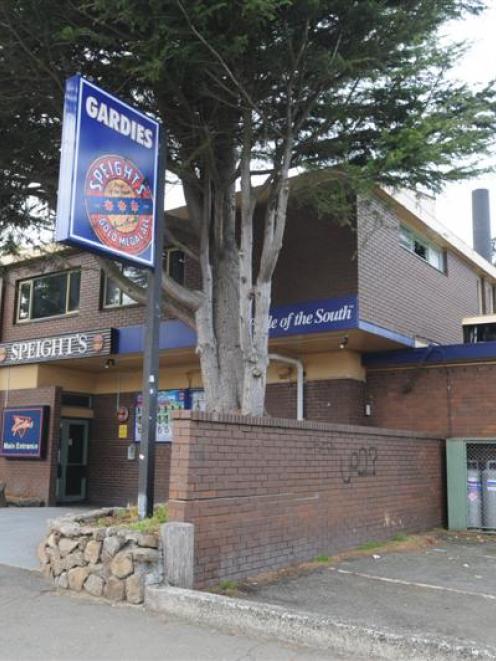 The Gardens. Photo by Peter McIntosh.
The party is nearly over for Dunedin's student pub, The Gardens, as the property has been bought by the University of Otago. Kim Dungey takes a last look.

When closing time is called tonight on Dunedin student watering hole The Gardens, it will be the end of a tavern that has seen huge changes in the way New Zealanders drink.

• Party over at the Gardies

Opened in 1970, The Gardens was the city's first purpose-built tavern, providing drinks but no accommodation.

It was also designed to take advantage of extended opening hours - its landscaped gardens and restaurant-style meals reflecting the move just a few years earlier from the "6 o'clock swill" to 10pm closing.

Its large size - 5500 sq ft of customer space with 60 carparks - might be unusual these days when there is an emphasis on the dangers of drinking and driving.

But original owner John Farry says not only had suburban taverns been identified as a gap in the market but developers were required to provide a certain amount of parking.

"You couldn't build a nice little bar in the middle of town.

For one thing, you had to have parking ...

So the so-called booze barns were a direct result of the legislation as it was framed ...

The Gardens, Mornington and Fairfield [taverns] were all quite large customer spaces."

Later, the North Dunedin tavern became a much-loved student haunt but it was not originally planned that way.

"It was a student area then but not nearly to the extent it is now," Farry says.

The tavern had its beginnings in the 1960s with a report by the Licensing Control Commission that described Dunedin as a city "full of pitiful old pubs".

"It really got my back up," says the Dunedin businessman.

"But the fact was it was very largely true. There had been no upgrades and nothing new done for many years.

"The report suggested various locations that could warrant the establishment of a liquor outlet and North Dunedin was one of those locations."

As a result, Farry - acting on behalf of his family - bought land at the corner of Castle and Brooks streets, and the licence of the former Excelsior Hotel on the corner of Princes and Dowling streets.

He then applied to the commission to have the licence transferred to the new tavern.

Some Dunedin hotels had already converted to taverns, doing away with their accommodation after the Sale of Liquor Act in 1962 made this possible, he says.

But The Gardens was the first built from scratch.

An advertising feature published on December 12, 1970 - the day the doors opened - described the "handsome", two-storeyed brick premises as taking advantage of natural light and views of the Botanic Garden.

Built for $250,000, the tavern featured a garden, where drinks could be taken, and an orange and brown interior colour scheme.

In the upstairs bar, the emphasis was on "sit-down drinking".

Customers would be offered "a choice of several steaks, lamb chops, cold meats, seafood cocktails and more exotic dishes", which they could enjoy "amid a decor which expresses tasteful luxury".

But even then, students were making their mark.

"The first day it opened, they put shampoo into the waterfall," Farry recalls.

Obtaining town planning permission for the premises had been a battle and, after it opened, the live music did not go down well with its elderly neighbours, he adds.

But The Gardens established the viability of a "straight-out liquor outlet with a bottlestore" and after selling the premises to Lion Breweries in 1972, he opened the Downtown Tavern (now the Lone Star).

Peter Innes-Jones, who has been at the pub 18 years, says siting it in a residential area was probably innovative at the time but also one of its biggest problems as it had been unsuccessful in attempts to have its liquor licence extended.

Innes-Jones does not take umbrage at the "Gardies" being described as a booze barn and says staff dealt with "nice people who didn't give a [hoot] that it was brown bricks and maroon carpet".

"In fact, 'tacky' was something we sold for a long time. I love my cafes and bars ... but that shouldn't be just what's on offer," he says.

"Taverns are taverns - big meeting places - and we work on volume ... It's not pretentious. We haven't got a lot of staff with pinnies on, serving drinks in nice tall glasses.

"We are jugs [of beer] and glasses of wine and we've never had a dress standard, only an attitude standard."

In 1992, when he became manager, the tavern was owned by a trust representing university sports teams.

Later, the Amalgamated Workers Union was a major shareholder.

Innes-Jones bought in four years ago and eventually owned the land and building with former Dunedin man Simon McConnon, of Auckland.

His first priorities as manager were to raise the profile of The Gardens, which was overshadowed in the early 1990s by the Oriental and the Captain Cook, and to turn it into a "full-noise student bar", he says.

For several years the tavern was known for the "Gardies real meal deal", the heavily discounted food proving popular with students.

Then, when other bars began selling cheap liquor, the upstairs area was turned into a dance bar complete with strobe lights and bubble machine.

"Test matches used to be fantastic for us when they were 2.30 kick-offs," he says.

"The biggest day I can remember was when the 1994 Springbok test was in town and we did in one day then what we'd do in three or four weeks now.

"It was different then because people would go to the pub before the game and straight after and we were the place to be.

We had most of the All Blacks here most of those nights and that was entirely influenced by the Otago rugby players who were students - the Marc Ellises and Jamie Josephs, guys like that.

"The 7.30 kick-off killed us because by the time people rolled back here at 9.30, well, we were closing two hours later and it was just not worth it. We're midnight closing on weekends and 11 every other night, which is about the time people think to come out these days."

And hotels only see patrons for the last half-hour of the night when they are three-quarters tanked from cheap alcohol bought at supermarkets.

People no longer align themselves to a particular student bar, either.

"In the old days, people bought into the local thing and price couldn't have had less to do with it. They bought into the fact they were a Gardies guy or a Cook guy or a Bowler guy ... That doesn't exist now. This generation grazes."

But the place "went well for a long time" and the fun had there was evidenced by the students who would return to the city for their graduation and "kiss the carpet".

Innes-Jones had hoped to sell the pub as a going concern but says for all the talk of students taking the place over, the university was the only serious buyer.

He wishes the institution was "slightly less righteous" about student drinking but wishes it luck.

"They're a growth industry and need the land," he says, noting that the university recently bought The Bowler with plans to use it for academic space.

"Let's hope that the [Captain] Cook hangs around and that people appreciate what's left of the student bars."

Former scarfies turned All Blacks Marc Ellis and Josh Kronfeld recall nights of drunkenness at the "Gardies" but say it never seemed to get too out of control.

Many of the things that went on were "absolutely hilarious", says Kronfeld, recalling a nude court session with the Highlanders.

"There was a 21st going on upstairs at the same time and it didn't seem to bother anyone."

It was also traditional to buy crates over the bar and drink from them at the table.

Ellis recalls fellow patrons doing "nude ski jumps" on the pool table - which is now at his Coromandel bach - and says while there was a lot of high-spirited fun, he never saw antisocial behaviour.

The university's plan to close the pub is indicative of "its desire to curb and control student behaviour", he says, describing such attempts as mean-spirited.

In trying to "tidy up all the rough edges", the university is missing one of the reasons people choose to study at Otago - the freedom to be themselves and a lack of a big-brother mentality.

However, university chief operating officer John Patrick says the university bought the premises because it has a use for the property and it was offered for sale by the owners who indicated it was no longer economically viable as a tavern.

"The university has a shortage of student study space and it was felt that this property could be developed as a study centre to help alleviate pressure in the central library. It is suitable because it is close to the main campus, and large properties such as this are not often available."

Ellis, who was at university in Dunedin until 1995, says that location right in the middle of "Scarfie land" was part of the secret to the Gardies' success.

"It had a nice layout, a good environment and served Speight's on tap. What more could a man want?"