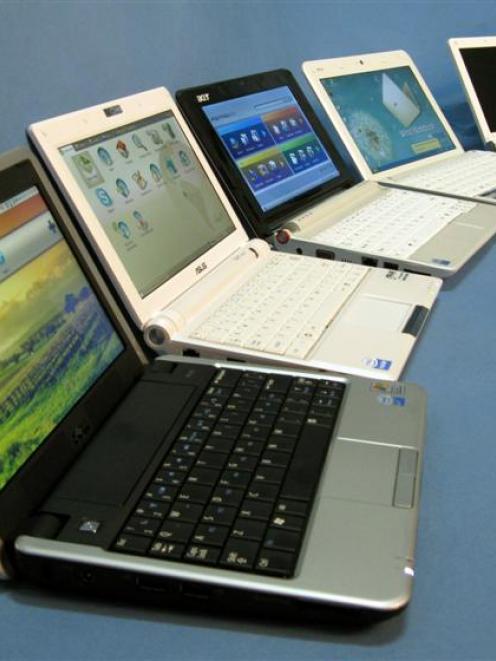 Netbooks by (from left) Dell, Asus, Acer, MSI and Lenovo.
How little laptop is enough? And how few dollars will it cost you? The ultralight laptop has traditionally been a luxury item.

But over the past couple of years, sanity has returned to this end of the computing universe: You can pay less for less of a laptop.

The WiFi-enabled laptops go by the term "netbook."

Netbooks promise little more than web access, weigh less than 2kg and start about $500. They've become one of the few bright spots in the computer market.

Any netbook can provide an excellent alternative to computing as we know it.

For little more than the price of a high-end smartphone, you can buy a machine with a real screen and keyboard and the ability to run programs you already know.

But many netbooks ship with cramped keyboards that defy touch-typing, screens that require constant scrolling to view web pages and stripped-down software setups that make installing extra programs difficult - if you can download copies, as these minimal machines lack CD or DVD drives.

A test of five netbooks - Acer's Aspire One, Asus' Eee PC 900, Dell's Inspiron Mini 9, Lenovo's S10 and MSI's Wind - showed how much work the industry has to do on this concept.

Despite major differences in software (Windows XP or Linux) and storage (hard drives or flash memory), these five models had one thing in common: obvious, avoidable errors.

Most of those were ill-considered design compromises forced by their tiny size and light weight. (The Asus, the lightest of the bunch, weighed only 1.1kg; the Lenovo was the heaviest, at 1.35kg.)

Their worst issue was keyboard design.

The Asus, the Dell and the MSI feature narrow period and slash keys - the most common punctuation in Web addresses.

Those three and the Lenovo exile the right-hand Shift key to the right of the up-arrow key, inviting you to select a previous line of text by accident and then overtype it with the next keystroke.

The roughly 25cm LCDs on the Lenovo and the MSI and the 22cm displays on the other three leave little room for most web pages, especially with the browser toolbars that Dell, Lenovo and MSI saw fit to pre-install.

Storage is yet another area of compromise. Limited amounts of flash memory left only about 3GB free on the Acer, 10GB on the Dell and 15 on the Asus.

The Lenovo and the MSI used hard drives with 50 to 60GB open. Those drives took a toll in battery life, however.

When asked to play through a loop of MP3s while reloading two news websites, the MSI expired in two hours, the Lenovo in 2 hours 15 minutes.

The Asus, by contrast, cruised along for 2hr 54min and the Dell for 3hr 14min.

The Acer's expanded-capacity battery (which comes at an additional cost) didn't run out until the five-hour mark.

Expandability is on the short side, with only two or three USB ports each, plus a memory-card reader (SD cards only on the Acer and Asus, SD and Memory Stick on the Dell, MSI and Lenovo models).

The Dell, MSI and Lenovo computers also included Bluetooth wireless. Most of these netbooks' software was also problematic.

The Lenovo and MSI netbooks arrived with Windows XP Home, which seems a safe choice but doesn't fit here.

These limited machines have little room for the wealth of software Windows supports.

The MSI review unit came with an odd, particularly vulnerable configuration of XP including the dangerously obsolete Internet Explorer 6 without antivirus software loaded.

(A spokesman said this computer might have been loaded with the wrong software bundle.) The open-source Linux operating system costs less (as in zero) and provides far better security.

And as it's set up on the Acer, Asus and Dell, it features all the basic tools you might need: the Firefox browser, music and photo tools, and the Microsoft-compatible OpenOffice productivity suite.

Acer put all these options behind a remarkably simple interface, with large, can't-miss shortcuts for each installed program.

Unfortunately, adding software to it required far more tinkering than most users would accept.

It also failed to print anything, even though it claimed to recognise an HP printer/scanner.

Asus' version of Linux looks almost as simple but badly needs to be simplified once you get past the first layer of program shortcuts.

And it wasn't much more hospitable to add-on programs.

Dell, by contrast, bundled Ubuntu Linux, a slightly more complicated but far more capable version of Linux that easily stands up to XP.

If only the Mini didn't have such a wretched keyboard - and a price inflated by extras such as Bluetooth and a webcam, which should have been standard - it would be easy to recommend.

What to get instead? If you're buying a netbook as your sole computer, knowing that you'll only use it on the web, Acer offers the best bet for now.

If, however, you're buying it as a third or fourth computer and are willing to tweak it to fit your own needs, look at the MSI.

If these manufacturers have the good sense to steal each other's best ideas, we should see significantly better choices before long.