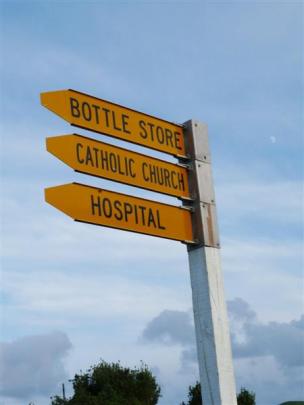 The main centre of Waitangi boasts many of the islands' essential services. Photos by Clare Gleeson. 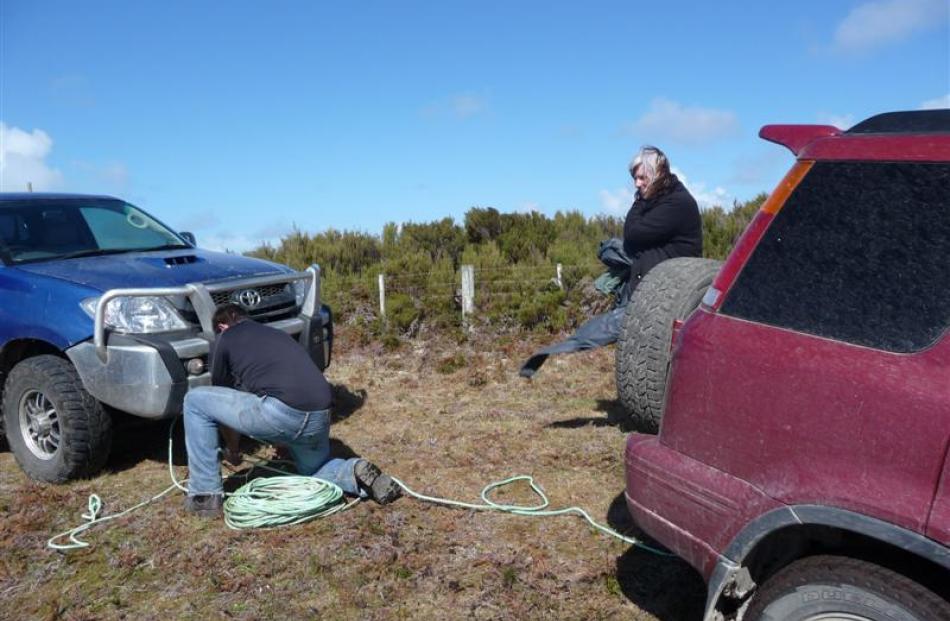 The writer's ''knight in shining amour'' saves the day. 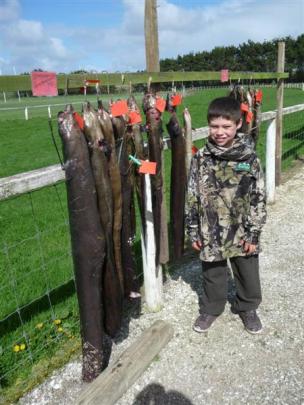 A competitor with his eels during the Chathams annual hunting contest.

The Chathams is charming - and valiant, too, writes Clare Gleeson.

Knights in shining armour come in all shapes and sizes.

Ours was driving a ute, not riding a horse; he was dressed in jeans and a bush shirt, not shining armour; and his weapons were a tow bar and rope, not a lance and a shield.

However, no medieval damsels in distress could have been more grateful than we were to see him come driving down the lonely Chatham Islands road.

While our husbands were out fishing for blue cod, we thought we were following the directions of the hotelkeeper on our drive to the cliffs for a magnificent view of the island's coastline.

Unfortunately we misunderstood him, but confident in our four-wheel drive ploughed on until we realised we were firmly embedded in mud.

We walked down to the road hoping someone would be driving past.

There are only 640 residents on the Chathams and we knew that many of them were at the Red Hut, the collection point for the annual eel, possum and pig hunt with which our visit coincided.

We'd been down that morning and seen the hunters' spoils.

In the car park there had been a huge mound of dead possums that continued to grow as utilities pulled up with their trays full of furry corpses.

The arrival of a truck carrying a dead wild pig created a mild stir.

The tusked pig was lifted, one man to each leg, carried to the scales, weighed and joined others hanging from a large metal frame.

Nearby, a line of eels hung from a wire fence, each labelled, then grouped according to the age of its childish predator.

A proud angler stood by his catch as I took his photo and more eels arrived in buckets, were measured, labelled and hung as we watched.

Groups were sitting on the stairs and standing around, talking and laughing, enjoying the hustle and bustle as more people arrived and the competition increased.

While driving around the island we had seen competitors of all ages armed with buckets, nets, spears and guns.

The eel competition was for the children and the winner in each age group was the one who had caught the longest eel.

The pigs were judged on weight and the winning possum trapper was the one who had trapped the most possums.

At the Red Hut there seemed to be dead animals everywhere.

But back to our Sir Galahad. As he drove us back to our stranded vehicle we were offered a celebratory beer, as it transpired that Glen, our knight, was the winner of the possum section of the weekend's competition.

Fortunately for us he had just gone home to shower and change before heading back to Waitangi to join in the revelries.

Twenty minutes, a rope, lots of mud and more detailed directions later we were ready to set off again, waving farewell to the hero of the hour.

• We had a delightful long weekend in the Chathams, a destination like no other.

At 680km and a one and a-half hour flight from New Zealand, it is remote but the friendliness and warmth of the people make you feel at home.

On the large, old aircraft we flew over on, we were the only passengers not personally acquainted with the flight attendant.

As we tucked into the home-prepared food, she solicitously questioned other passengers about members of their families.

We had booked into Hotel Chatham, the only hotel on the island, although there is other accommodation.

There were only eight tourists on the Chathams when we were there and this included two dentists working for the Hawkes Bay District Health Board.

All the tourists came to eat at the hotel every evening.

At breakfast one morning, the manageress asked us what we'd like for dinner that night.

The crayfish were caught to order and we were the envy of the other guests that night as we tucked in to their delicious butteriness.

Hotel Chatham is in Waitangi, the main township.

Waitangi has a general store, which stocks a huge range of goods and groceries, a small hospital, a bottle store, which is in a garage, a Catholic church and an ANZ bank, as well as accommodation.

There is no WiFi on the island, and no cellphone coverage, so you really are getting away from it all.

The hotel, right on the harbour, is very comfortable and serves good food.

The owner, Val, is the major tourism operator on the island.

Not only did he provide accommodation, food and a rental car, but he was also the owner and skipper on the fishing charter.

As well as this busy life, he supplies a Sydney restaurant with fresh fish every week.

In our rental car we spent two days exploring the main island.

Chatham was windswept, there was no getting away from it.

Everywhere we went we saw trees stunted and blown out of shape and we were glad of our jackets and hats.

There are wekas everywhere and weka stew is a popular local dish.

The land is mainly farmland but there were stands of native forest scattered all over the island.

Most of the roads are unsealed, except for some around Waitangi.

We drove around and visited the various places of interest, always completely deserted except for us.

One of the pilots who flies to and from New Zealand is restoring a Sunderland flying boat that crashed and sunk off the island in 1959.

It's a huge project and by the look of it will take many years.

There is a lovely wetland area to wander through and we explored the J. M. Barker (Hapupu) National Historic Reserve where there are tree carvings made by the Moriori.

Near the settlement of Owenga there is a statute of the last of the Moriori, Tommy Solomon, who died in 1933.

One afternoon we went to the beach and, although there are hundreds there apparently, we hunted for fossilised baby shark's teeth to no avail.

It has been said that the Chathams is what New Zealand used to be like.

It isn't, of course, but it is relaxed, laid-back, a fascinating place to visit and I can vouch for its chivalry.

• Clare Gleeson is a Wellington-based historian and a traveller.