Ambitious plan to roof the Octagon 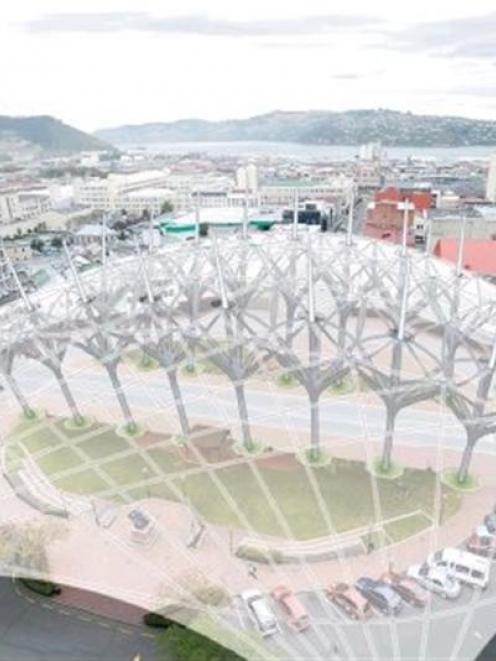 An artist's impression of the proposed roof over the Octagon in Dunedin, which will provide an alternative arena for concerts and theatre.
Dunedin's Octagon is to be covered with a state-of-the-art thermoplastic roof, the same material being used at the Forsyth Barr Stadium, a secret report has revealed.

A Dunedin City Council report, expected to be released at noon today, but leaked to the Otago Daily Times this week, revealed the ambitious plan which could cost the city up to $15 million.

The ETFE space-age thermoplastic product being used at the stadium would be installed over the entire Octagon.

It is eventually planned to close the Octagon to traffic, opening up the opportunity for bars and restaurants in the area to expand their outdoor dining operations, the report says.

The report was prompted by the expected removal of diseased plane trees in the Octagon and the growing concerns about the future of the Regent Theatre.

It is hoped by roofing the Octagon, the area could effectively replace the Regent, providing an alternative arena for concerts and theatre.

Temporary seating from the stadium could be used to create a 1500-seat amphitheatre.

The Robbie Burns statue, situated in the upper Octagon, would be relocated to become a centrepiece for the facility.

"Since work started on the Forsyth Barr Stadium, we have uncovered endless possibilities for events to be held at that venue," a council insider said.

"This has really opened up the council's eyes to the potential of indoor sporting and cultural venues for a city such as Dunedin."

Fearing ratepayer backlash, councillors are understood to have argued to delay releasing details of the plan until after October's local body elections.

It was then hoped to put the project out for public consultation, with submissions closing on April 1, 2011.

Most of the funding for the project was likely to come from a new inner-city parking tax, where motorists would be expected to pay up to 50% more to park within the central city.

"This project will not be a burden on ratepayers.

It should cost $15 million to build this facility, and not a cent more," the insider said.

Consideration has also been given to using the Octagon as a niche sporting venue to complement the new stadium.

A temporary netball or basketball court could be installed on the central carriageway, while a feasibility study is also under way to look at installing a temporary wooden cycling track.

This would enable the city to host national and international track cycling meets and overtake Invercargill as the country's national cycling base.

The Octagon revamp would also give the city two multi-purpose venues, effectively turning Dunedin into the multipurpose-venue capital of New Zealand.