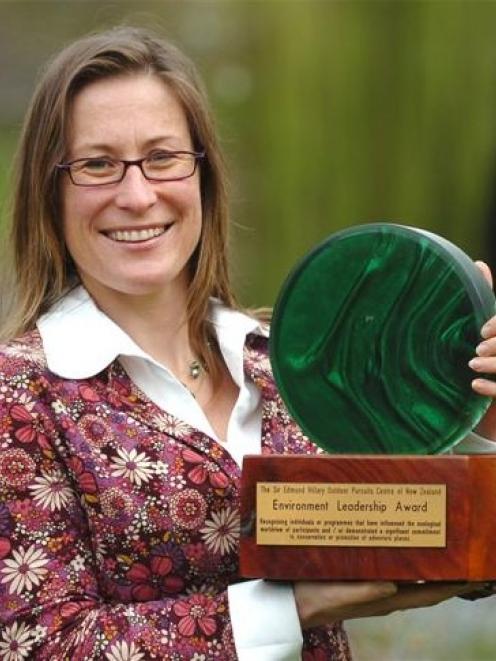 At a ceremony at the University of Otago this week, Ms Baker said the award was recognition of her work, and the efforts of many others, who were concerned about the future of New Zealand's rivers.

In the past decade, she has worked as an advocate for groups concerned with river access and general environmental protection, including the New Zealand Recreational Canoe Association, Fish and Game and the Otago Kayaking Club.

Her work has focused on protecting river flows, providing access for kayakers and other recreational users, halting large- and small-scale developments and mitigating the impact of projects on more than 15 major rivers.

She also represented recreational groups seeking "rapid mitigation" for past loss of recreational areas on the Clutha River as a result of the Clyde dam project.

As a partner at Dunedin law firm Anderson Lloyd Lawyers specialising in water resource cases, she recently represented Fish and Game in making an application to protect the Nevis River from damming.

"I'm confident the important rivers will be protected, but there will be some that will change. The important thing to remember is we are nearly at the limit of rivers which can be dammed, so we really need to protect the pristine and scenic rivers which remain."

Ms Baker started kayaking with family when she was 12 and paddled rivers near Mavora and Wanaka.

The Shotover and Buller have since become favourite kayaking areas, but she is realistic about ever taking on the fearsome "Mt Cook of kayaking", the grade-five Nevis Gorge.

According to the Sir Edmund Hillary Outdoor Pursuits Centre, the award acknowledged outstanding individuals or programmes which had demonstrated a significant dedication to conservation.

The inaugural winner in 2007 was Dr Barry Law, a senior lecturer in sustainability education at the University of Canterbury.