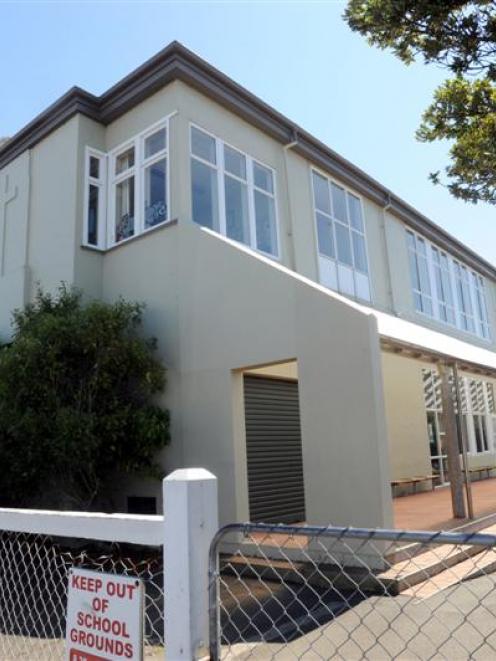 St Patrick's School. Photo by Peter McIntosh.
St Patrick's School in South Dunedin will be the sixth primary school in two and a-half years to close in the city, but an education specialist believes closures may become less frequent.

Roman Catholic Bishop of Dunedin, the Most Rev Colin Campbell, said he had given "careful consideration" to Catholic schooling in the Dunedin South pastoral area, after the school's board raised concerns about its declining roll, and the consequential strains on governance and management.

"St Patrick's School has served its parish well over many years, but demographic shifts and other changes in South Dunedin have created the need for reviewing the way we provide Catholic education," he said. He had advised the Ministry of Education of his wish to restructure schooling in the area as soon as possible by consolidating on St Bernadette's (Forbury) and St Brigid's (Tainui).

Catholic Education Office director Tony Hanning said St Patrick's roll of about 30 pupils was expected to be about 20 at the start of next year.

Mr Hanning said it was hoped the school could be closed before the start of term one next year, but Education Minister Anne Tolley would make the official decision.

It was still too early to say what would happen to the land and buildings, owned by the church.

"A lot of family homes are being bought and developed into retirement flats, which means there are fewer families living in South Dunedin.

"Another factor is people are much more mobile these days, and they will often choose a school that's nearer their work than their home."

Education specialist and University of Otago Educational Assessment Research Unit emeritus director Lester Flockton said the main reason for Dunedin's primary school closures was that while many were built post-World War 2 to educate the baby boom, the child-age population had decreased again.

There were not enough children to fill all the classrooms.

With the recent closures, the number of primary schools was beginning to match the demand.

"If I had to predict the future, I would say I think we are past the hump of it.

"School closures will become an occasional event - but it's all just crystal ball gazing."