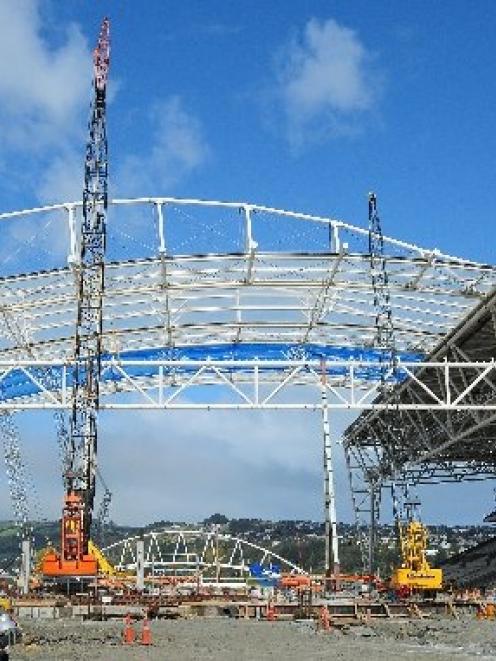 Someone drove a crawler crane tethered to a truss stretched between the north and south stands soon after 4am yesterday.

The crawler travelled more than 20m, over a high voltage power cable and through a fence. It stopped over a concrete slab at the stadium's western end.

The planar roof truss seemed undamaged - perhaps because the driver had let some slack into the line attached to the crawler's crane, Senior Sergeant Mel Aitken, of Dunedin, said.

"It could have been a lot worse. It all seems so bizarre - it might have started out as a silly prank but it could easily have had someone killed by electric shock, someone crushed, or the stadium very seriously damaged."

Security footage suggested a "scissor" lifter on the fourth floor of the unfinished south stand was interfered with soon after 3.20am. It crashed into another scissor lifter and damaged a wall.

The crane was moved just after 4am.

In addition, a grease-gun was taken from a box and grease smeared on a nearby crane, Snr Sgt Aitken said.

"It was an unbelievably stupid thing to do. Security will have to be beefed up, and I'm sure there will be questions as to how someone can access and drive a crane," she said.

Arrow International projects manager Lale Ieremia said he could not discuss security but confirmed it had been "ramped up".

The incidents, which looked like "a bit of drunken misfortune", were the first security breaches at the site, he said.

The truss attached to the crane had been assessed and appeared undamaged, and engineers would check again today.

Damage to the scissor lift and walls was minor.

A thorough investigation had started and the Carisbrook Stadium Charitable Trust would be fully informed, Mr Ieremia said.

When asked, he confirmed the cranes were supposed to be secure and contractors would be asked to explain how the security breach could have happened.

Trust chairman Malcolm Farry, who was out of Dunedin yesterday, said he wanted to know how someone could enter the site and drive a crane. He expected security to be improved and to receive a detailed report into the incidents today.