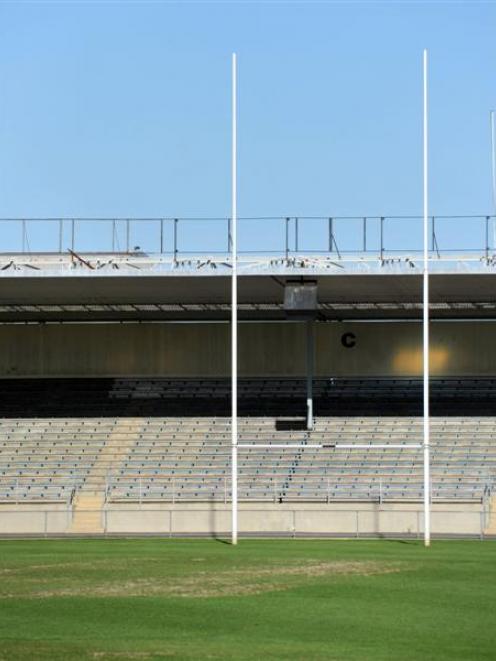 Saving goal posts uncertain. Photo by Craig Baxter.
At least one significant piece of Carisbrook's history could yet be saved, but mystery surrounds the likely fate of other features when the old ground passes into private hands.

Talks are continuing between the New Zealand Historic Places Trust and the Dunedin City Council on a covenant that, if agreed, would protect the old ground's category one-listed turnstile building below the Neville St Stand.

However, other features - including the ground's playing surface and oldest grandstands - would not be saved by the NZHPT, Otago-Southland area manager Owen Graham said.

Their fate would be decided by the purchaser, Calder Stewart, if and when its conditional deal with the council was confirmed and plans for the site progressed.

The ashes of at least two sporting greats - cricketer Bert Sutcliffe and All Black Charlie Saxton - also remain hidden under the hallowed turf, and the future of the ground's goal posts was unclear.

The council bought Carisbrook from the Otago Rugby Football Union in 2011, but earlier this year announced a conditional deal to sell it to Calder Stewart for industrial use.

The company has so far refused to discuss its plans for the site. Mr Graham said Carisbrook's turnstile building, playing surface and oldest grandstands had all received NZHPT registration in 2008, in recognition of ''the history of the place and what happened there''.

Registration did not provide protection, and the covenant being discussed with the council would only cover the turnstile building.

''The playing ground is not going to be saved by HPT,'' he said.

''That's what turns out to be a business decision between the council and the purchaser.''

Otago Cricket had organised a search for Sutcliffe's ashes in 2010, but was unable to locate his urn and gave up, with the blessing of his family.

Council city property manager Robert Clark said the goal posts were covered by the sale agreement, meaning what eventually happened to them ''will be up to the purchaser''.

ORFU general manager Richard Kinley believed the goal posts should be shifted to a council-owned sports field for club rugby use.

''I would have thought to see them recycled and put them on one of their grounds would be the best thing they could do.''

The union bought the goal posts for $12,000 in 2004, and tried unsuccessfully to auction them after selling the ground to the council.

The goal posts stayed and the council took possession of them, along with the rest of the ground, on January 26 last year, Mr Kinley said.

''Obviously, they're big goal posts - it takes a bit to get them out.''

They had proved useful since, as the ground was used as a practice facility during the 2011 Rugby World Cup, by the All Blacks last year and the Warriors earlier this year.

However, Mr Clark said no further training sessions were planned at this stage.

The council has given no set deadline for Calder Stewart to confirm its purchase of Carisbrook, saying only it would take ''weeks or months''.

Calder Stewart staff, contacted by the ODT, replied with a succinct email: ''We have no comment.''