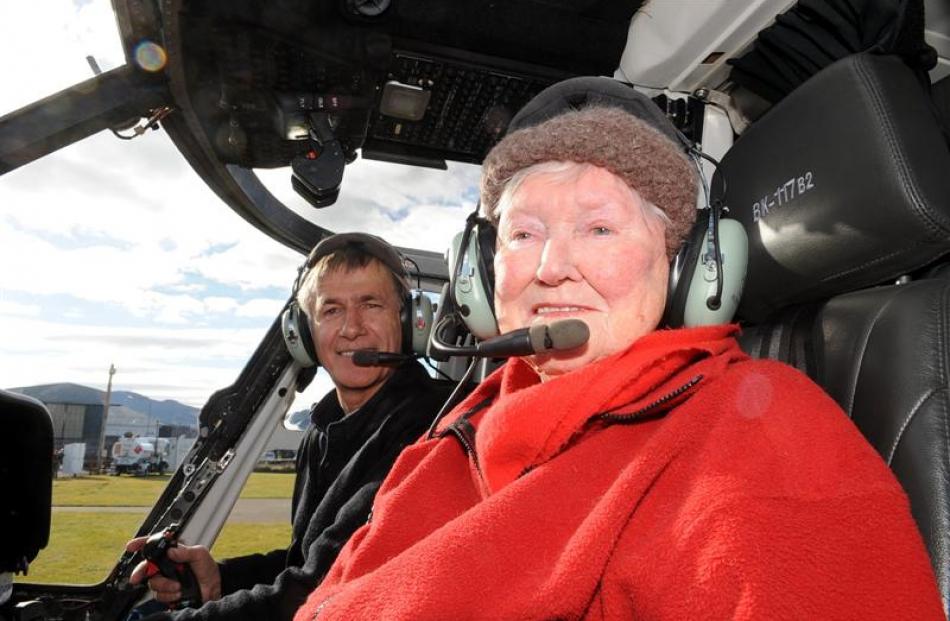 Betty Sharpe (92) before her scenic flight over Dunedin with Helicopters Otago owner and pilot Graeme Gale. Photo by Linda Robertson. 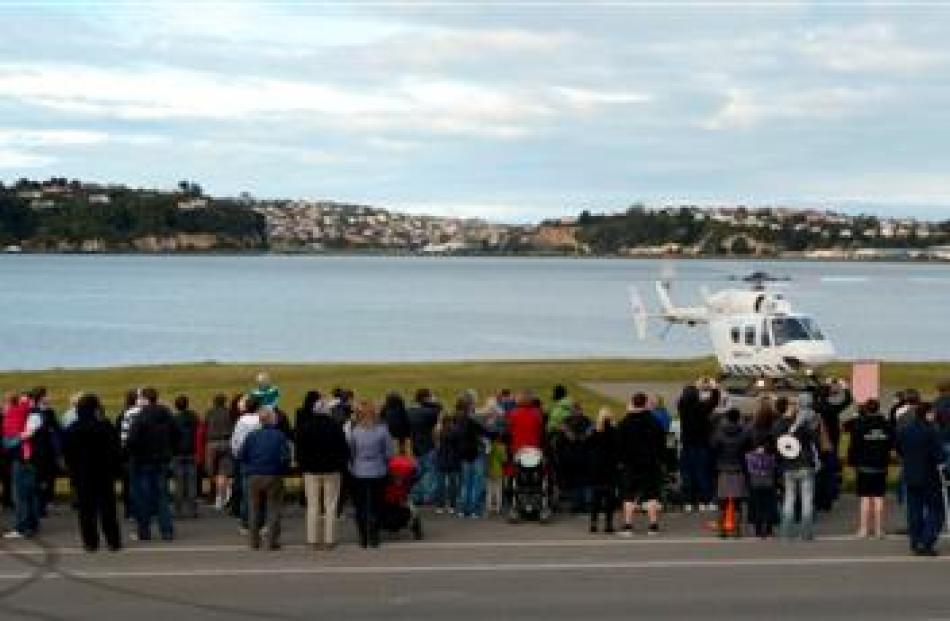 Hundreds queue at the Kitchener St heliport on Saturday for helicopter joyrides to raise funds for the Chair of Neurosurgery Campaign.

A long-held wish to fly in a helicopter came true for a Dunedin nonagenarian, thanks to a high-flying fundraising venture.

Betty Sharpe (92) gave the thumbs up before and after her scenic flight with Helicopters Otago owner Graeme Gale.

"It was great," she told the Otago Daily Times before declaring the view over Otago Peninsula her personal highlight.

Her daughter Ruth said it was her mother's long-held dream to fly in a helicopter, and the event was made even better by each $100-a-seat donation going towards the Chair of Neurosurgery Campaign.

The provisional total for the fundraising event was just over $60,000 and more was expected in the "wash-up", Mr Gale said.

Queues began forming an hour before the 11am start.

They were 200 people long throughout the day and flanked by dozens of camera-wielding enthusiasts.

Demand was so strong that three of Helicopters Otago's BK117s - including the Otago Regional Rescue Helicopter - were used.

Jake Miller (14) had always admired the black rescue helicopter flying over his Fairfield home, and was visibly delighted to ride in the chopper and get Mr Gale's signature.

Mr Gale said he was not surprised by the strong support shown for the neurosurgery campaign from throughout the region.

"It is an important service, and the community has shown their support."

Such was the level of support that many passengers donated hundreds of dollars for their seat, and passing motorists attracted by the overhead spectacle stopped to give cash donations, he said.

Appeal project manager Irene Mosley said the weather had been ideal, and the support fantastic.

Rescue helicopters performed an invaluable role in the community, she said, and she praised the company and staff for giving their time.

Also earning praise were the Dunedin South Rotary Club volunteers who assisted with crowd control, the barbecue and car parking, and the Otago Regional Council, which opened up the neighbouring wharf for additional car parking.

Mr Gale said he was pleasantly surprised to receive an email yesterday from a Beaumont couple, who are holidaying in Colorado, United States.

They had seen the publicity online, and wished to give $200 to the cause, even though they could not take the rides.