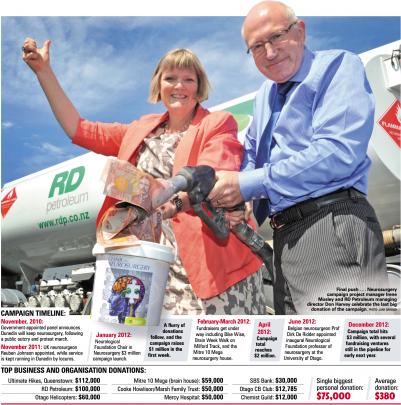 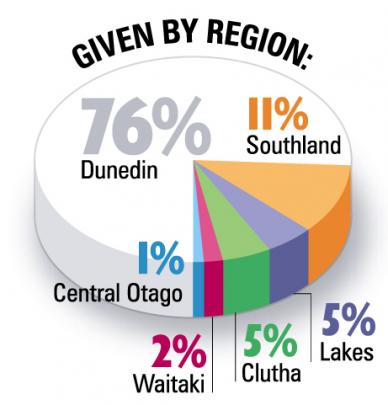 The future of the southern neurosurgery service is now assured, with the announcement $3 million has been raised for the Chair in Neurosurgery at the University of Otago in Dunedin.

The campaign was launched in Dunedin on January 20. Since then a brain walk, bike-riding challenge, house build and auction, helicopter rides, art and book sales, workplace fundraisers, an envelope appeal, and numerous other events have been held in Otago and Southland.

Campaign committee chairman Dr Brian McMahon said he felt both happiness and a sense of relief.

"I offer my thanks and congratulations to all those who were so generous, and to those who worked so hard to secure this outstanding result in such a relatively short period of time."

The funds endow the university chair to which Belgian neurosurgeon Prof Dirk De Ridder has been appointed. He arrives in Dunedin in February next year.

After a public outcry over a threatened loss of the service in 2010, a Government-appointed panel decreed Dunedin would retain neurosurgery. To support the required minimum of three neurosurgeons, two academic posts would be established.

The joint appointments ensured Dunedin could sustain three neurosurgeons to form the southern hub of the South Island neurosurgical service.

"With Prof Dirk De Ridder arriving soon, I am looking forward to this unit developing into a leading centre of excellence for neurosurgery, neurosurgery-related research, and teaching that will reap important benefits for all New Zealanders."

"We are humbled by all these generous contributions that have now ensured this important professorial position is funded in perpetuity."

"To me, this is what makes New Zealand, and the South in particular, such a special place. We still care and we still know how to get stuck in and find a solution without waiting for someone else to fix the problem." The campaign would be formally wound up in February.

Fundraising events planned for the coming months would go ahead, the extra money providing an important buffer against low interest rates.

Otago Daily Times editor Murray Kirkness said the newspaper raised awareness of the neurosurgery campaign, but its success was due to the goodwill and enthusiasm of the South.

"When we helped launch the fundraising effort in January, we asked readers to finish what was started in 2010 when the South fought the loss of the service.

"The response shows people were willing to back up their resolve, in a great example of Otago and Southland working together for their joint benefit."

"It has been particularly pleasing to see the development of partnerships with the community and university. This is a new and innovative way of supporting the sustainability of smaller health services."

Health Minister Tony Ryall said through a spokeswoman: "Congratulations on reaching your goal - this is a great achievement for the community".

RD Petroleum managing director Don Harvey said the company was proud to support a campaign that ensured Otago and Southland people had timely access to a critical health service.

The cause resonated with RD Petroleum because of its work installing fuel supplies in rural areas that would otherwise have no supply.