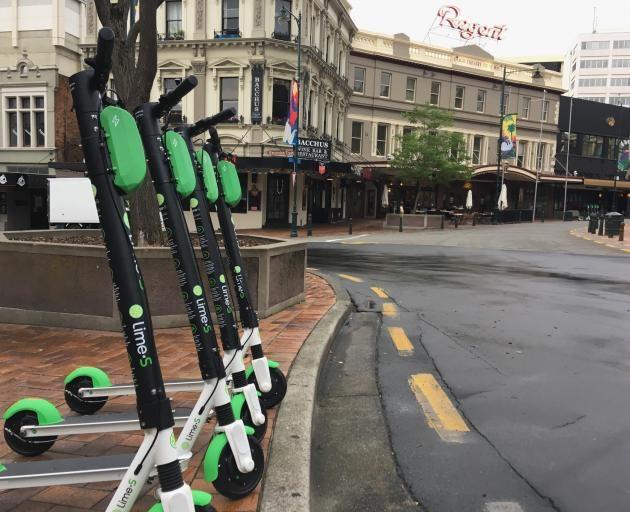 Photo: ODT files
Both Dunedin and Auckland city councillors have questioned the need for the thousands of emails received from Lime e-scooter supporters, as the company works to fix a problem that resulted in riders being injured by brake lock-ups.

Users of the Lime app in Dunedin were asked to share their support for the company, by sending emails to the mayor and councillors.

The app took them to a form email noting how many local riders had used the service, and saying "I support Lime as a transport option for Dunedin".

As of yesterday evening, the app showed 2391 emails had been sent.

The same request was made of Auckland scooter users.

On Saturday, Lime said on its website analysis had "diagnosed the issue in a laboratory environment and determined that in very rare cases - usually riding downhill at top speed while hitting a pothole or other obstacle - excessive brake force on the front wheel can occur, resulting in a scooter stopping unexpectedly".

"We have developed a series of updates for the firmware and are confident in their efficacy."

"Firmware fixes" had been rolled out.

"A final update is now being dispatched to every Lime scooter in the market and will be complete shortly."

The company said users should be cautious in the next few days while the final firmware update was installed, "and don't go full speed while riding downhill".

Dunedin Mayor Dave Cull said he had hundreds of supporters' emails in his inbox, as had all other councillors.

He questioned why the company was running the campaign when it had voluntarily withdrawn its scooters.

"I think their campaign is an irritating and potentially counterproductive one."

Mr Cull said he did not know of a single councillor who did not want the option of Lime scooters in the city.

"But they must be safe."

Mr Cull said the council just wanted the issue fixed, and to have the scooters safely back on the streets as soon as possible.

"So I'm a bit bemused by the campaign trying to change our mind on something when it wasn't us that made the decision."

Mr Cull said he understood once proof of a fix was provided to Auckland, the company would come to the Dunedin council to say it was bringing the scooters back.

If the problem was fixed, the council would be "perfectly happy with that".

Auckland councillors bombarded by emails said it was a tactic other lobbyists had tried, such as in the 1080 debate.

One councillor, Penny Hulse, said she was surprised by the tactic, because councillors already appreciated there was support.

DCC would know all about ‘irritating and potentially counterproductive campaigns’, having wasted ratepayers’ money running one of their own.

The difference being this i & c campaign is instigated offshore, by a Company relying on NZACC to void the Right to Sue for injury.

Not a smart move by Lime in the circumstances.

Mr Cull said the council just wanted the issue fixed, and to have the scooters safely back on the streets as soon as possible.

"But they must be safe."

So just to be clear Dave, does that mean no more pavement riding? Otherwise they could hardly be considered 'safe' could they.