Dental fixture still to be polished 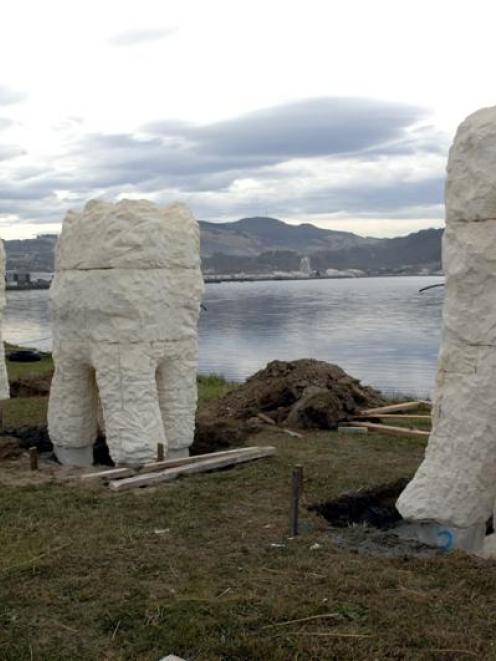 Harbour Mouth Molars comprises six large wisdom teeth constructed from concrete and Oamaru stone, each weighing 6.5 tonnes, and paid for by the Dunedin City Council under its art in public places programme.

Gentry, originally from Hawkes Bay, was on site yesterday as the work was brought to the Kitchener St Reserve, where he plans to apply the finishing touches.

Since graduating from the Otago Polytechnic in 2000 with a bachelor of fine arts degree, he has built a reputation in public art, completing works including Green Islands, the inaugural Four Plinths commission on the fringes of the Te Papa Tongarewa forecourt; Near Nowhere, Near Impossible, the result of his residency at the Sarjeant Gallery in Whanganui; and Flour Power, in Christchurch.

His dry, cracked hands told of the two and a-half months of 12-hour-a-day, six-day-a-week work he has been putting into the sculpture at the back of a house in Duncan St.

"It sucks them dry," he said of his first - and possibly last - experience working with Oamaru stone.

The work had involved tools including chainsaws, axes and jackhammers.

His time at the polytechnic which was marked with wisdom teeth problems, and Dunedin's geological history of eruptions, which reminded him of teeth erupting through gums, "all seemed to gel" for the work.

At present based in Rotterdam while his partner attends university, he returned to do the work that had been organised before he left.

Before the official opening on April 10, he had to do more basic shaping on the $45,000 work, some grouting, and to add rope near the bottom of each "tooth", which, when wet, would discolour the area below.

As well, there would be a rock bed and planting around the teeth.

"The idea is based on its susceptibility to decay and damage," he said, something that was often not thought of in civic constructions.

"I wanted to make something that would obviously decay and change."