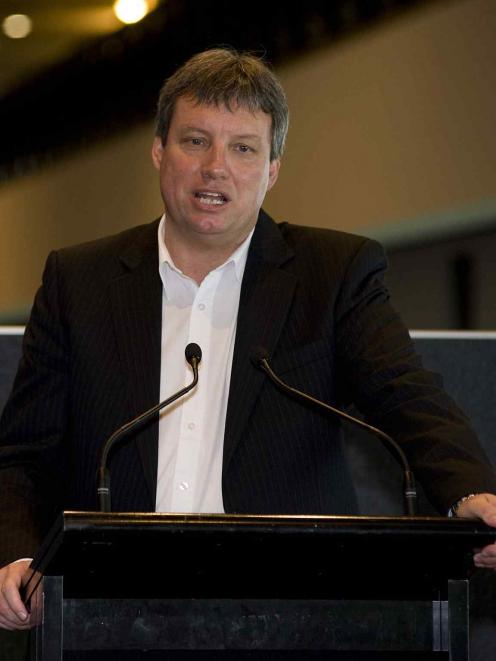 Rugby NZ chief Martin Snedden says completion of the Forsyth Barr Stadium is one of the "challenges" facing the Rugby World Cup 2011. Photo: Murray Lloyd Photography
The completion of the Forsyth Barr Stadium was one of the "challenges" of the Rugby World Cup but would be a major showcase for the tournament, Rugby New Zealand 2011 chief executive Martin Snedden said.

Addressing domestic and international media at Eden Park yesterday, Mr Snedden singled out the stadium, saying ensuring the roofed stadium was ready on time was one of the challenges facing the 2011 tournament, when an estimated $500 million would be spent on stadiums.

"It is scheduled to finish . . . we can only admire the efforts people have made down there to overcome a series of obstacles."

While the timeframe to complete the stadium was "tight", Carisbrook would be used as a back-up for organisers and "we are putting no obstacles in their way".

"We think it [the stadium] will be a great showcase feature for us."

Mr Snedden said with a clock counting down the days to the tournament on the wall of his office, work "to showcase New Zealand was well under way".

"This tournament is not about the All Blacks; it is about being given the privilege of hosting one of the biggest tournaments in the world."

Other challenges facing organisers include a shortage of accommodation and transport options.

To alleviate possible accommodation shortages in the main centre, tournament organisers had secured 75% of bed nights in "three-star and upwards" for an accommodation bank during the tournament.

While Queenstown had not been awarded World Cup games, it was expected to be popular for World Cup fans as tournament games were held around the country, he said.

Mr Snedden said the tournament was like a "rolling maul", with centres expected to be full at certain times and quieter during other periods.