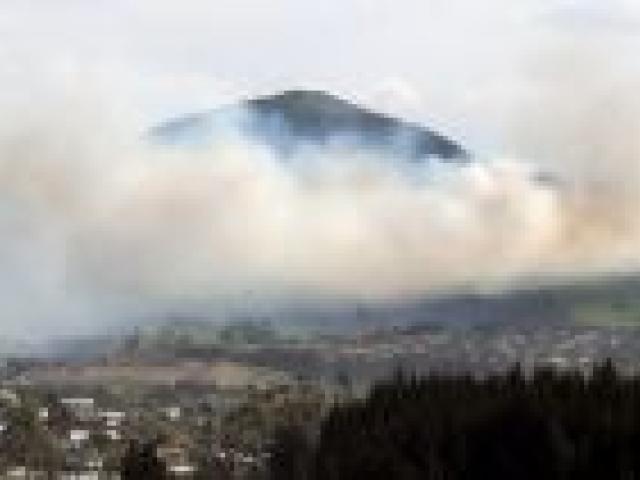 Wind blows smoke from the Saddle Hill fire across Dunedin city. Photo by Peter McIntosh.
Emergency services were called from far and wide to battle the vegetation fire that swept over Saddle Hill on Wednesday.

The blaze, which covered up to 100ha and forced the evacuation of properties and livestock, resulted in a taxing day for Fire Service staff and others who assisted.

Twenty-one fire engines, six helicopters and 10 police vehicles were used during the 24 hours or so the flames persisted.

The work continued yesterday, with Fire Service staff stationed in the area throughout the night to monitor the situation.

Otago Rural Fire Authority principal rural fire officer Stephanie Rotarangi said the region was prepared for such an event but its resources were still stretched to their limit.

''It was very well forecast - we had good predictions from the MetService and we brought in a lot of cover,'' Dr Rotarangi said.

''That aside, it was a very challenging day - firefighters were fully engaged for much of the day.''

The full allocation of fire crews, including those on standby, were employed to battle the blaze.

The authority was being helped yesterday by Southern and South Canterbury fire crews at Saddle Hill and also at Dunback, where another fire took hold as the ''mopping up'' continued.

Dr Rotarangi said she did not expect Wednesday's fire to be the last this summer.

''We've got a challenging fire season ahead. We have to focus on endurance. Some areas of Otago are already dry and are predicted to get a lot drier.''

''I do believe we coped well under very trying conditions.

''Size-wise, it was actually very small compared to some fires, but being so close to properties makes it very dangerous.''

The New Zealand Fire Service and the Otago Rural Fire Authority will assess damage to property and vegetation this morning.

Fire Service specialist fire investigator Michael Harrison said teams were out yesterday trying to establish the cause of the fire.

They were following several lines of inquiry.

While nothing official had been confirmed, scans of the area showed several structures were damaged, Mr Harrison said.

Authority deputy principal rural fire officer Jamie Cowan said on Wednesday up to nine houses had been damaged by the blaze.

Insurance company AIG said no claims had been lodged yet in relation to the fire.

However, many people could be waiting to assess damage over the weekend before filing a claim, a spokesman said.