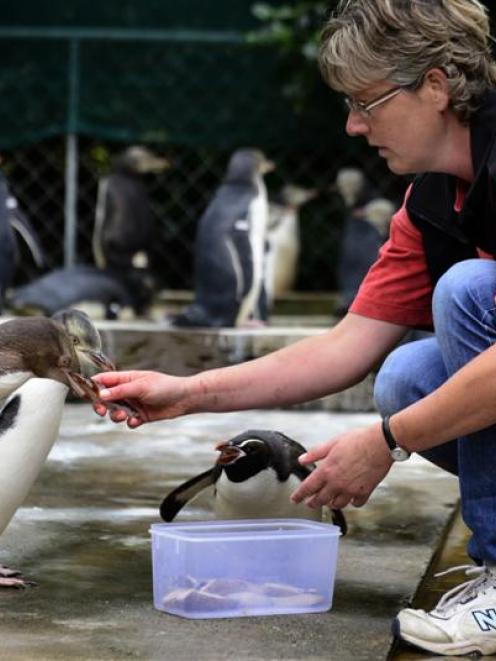 The chicks, who have lost one or both parents, are transported to the rehabilitation centre at Penguin Place, where they are fed and looked after until they are at the optimum weight to be released back into the wild. Penguin Place resident scientist Dr Hiltrun Ratz said 30 yellow-eyed penguin chicks, plus three adults and three juveniles, were being looked after.

The recent deaths of more than 40 adult penguins on the peninsula meant many chicks on the brink of fledging needed help.

''The season had gone really well until now. It will take those colonies years to recover,'' Dr Ratz said.

''They're very lucky to have been found by us or Doc [the Department of Conservation]. We make them fat again and then let them go.''

The chance of rehabilitation was much better when the chicks were rescued while still in good condition.

As Penguin Place was looking after two snares penguins and two Fiordland crested penguins, as well as the yellow-eyeds, it was taking two hours twice a day to feed them all, Dr Ratz said.

There was also the cleaning and the two to three hours it took to cut up the 1kg of fish each bird ate a day.

Luckily, Bluff fishing company Urwin and Co Ltd had donated 2.5 tonnes of smooth dory, which had eased the burden of feeding the chicks, she said.