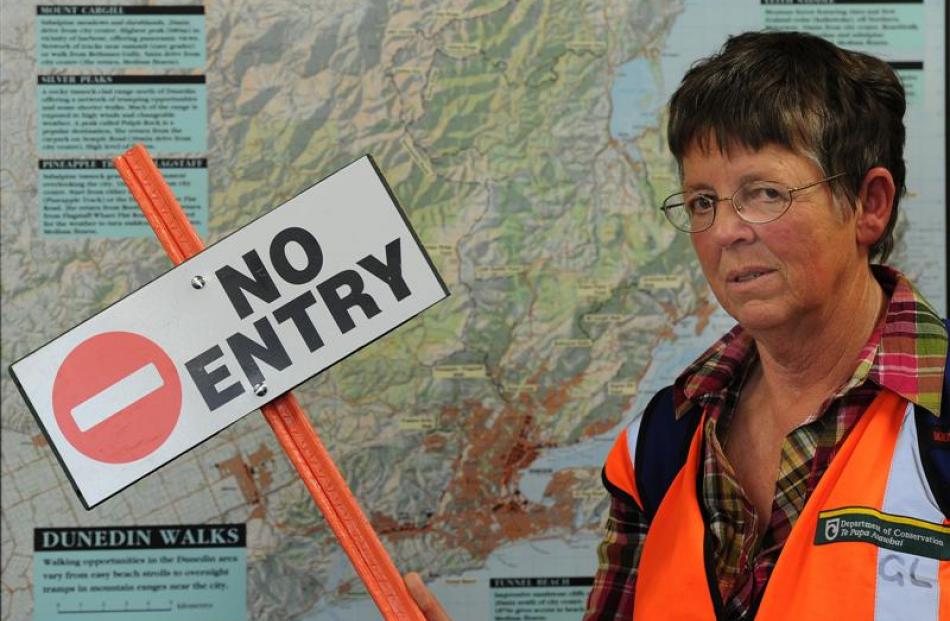 Volunteer Pat Dean with the extra sign she is putting up on Sandfly Bay after a run-in with a camping German tourist. Photo by Craig Baxter.

Discovering a tourist had lit a campfire in the dunes at Sandfly Bay right next to a threatened yellow-eyed penguin colony was the last straw for volunteer Pat Dean.

With what had killed at least 56 yellow-eyed penguin adults along Otago Peninsula beaches still a mystery, the possibility a fire could get out of control and whip through the colony angered the Department of Conservation and its volunteers.

''What an idiot, he could have burnt the whole place down ... especially given the rough trot we've had,'' Ms Dean said.

Doc ranger Mel Young said the fire risk was high along the coast especially with a westerly on-shore wind. A fire in a penguin colony further south in 1995 wiped it out.

''Given we've had to take six breeding adults out of there [Sandfly Bay] dead recently, I can't believe it.''

Ms Dean (64), who has volunteered for six summers at Sandfly Bay, said she approached the German tourist when she saw smoke billowing up from the dunes where the public were asked not to go.

''I shot up the dunes yelling for him to put it out. He had his tent up and a sturdy fire going under the shelter of marram grass.''

She kicked sand on the fire and dragged the main log down the beach to the water.

''Any sparks could have set it off and decimated the place.''

The tourist, who had walked to the beach, was urged to leave and catch a ride with a fellow tourist.

Ms Young said it was not the only unthinking behaviour to happen recently, as she had seen surfers go on to the Boulder Beach reserve, which was closed, even after being told by Doc of the ''mass mortality'' event.

Doc biodiversity programme manager Dave Agnew said it was another stress those working with the yellow-eyed penguins did not need after having to rescue underweight chicks and pick up their dead parents.

''The past week we have had so much support from volunteers and the community.''

Tests at the Cawthron Institute to see if a marine biotoxin had caused the deaths had come back negative so environmental testing, including deep water testing in known foraging sites, would take place next week. On the positive side, no dead penguins had been found in the past three days, he said.

Volunteers, Doc staff, the Yellow-eyed Penguin Trust and tour operators would continue to scour the beaches during the next week. Any assistance would be welcomed for those searches or regular volunteering at Sandfly Bay, Mr Agnew said.