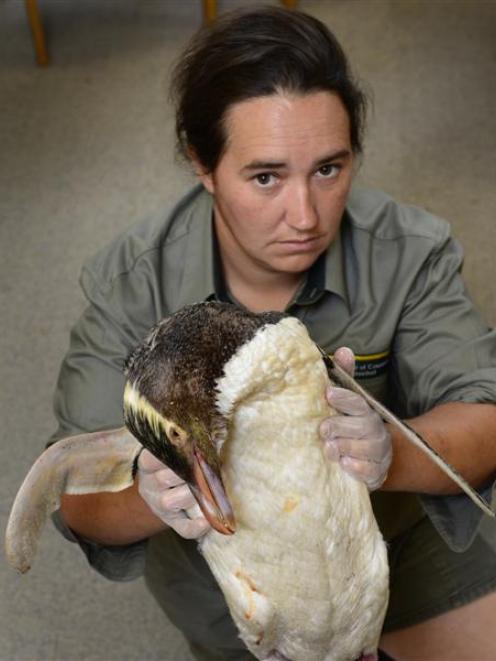 Department of Conservation biodiversity ranger Mel Young holds a yellow-eyed penguin, which died from unknown causes. Photo by Peter McIntosh.
The bodies of more than 40 endangered yellow-eyed penguins have been found on Otago Peninsula, raising concerns of a repeat of a ''mass mortality'' event which wiped out 60% of peninsula breeding adults in 1990.

Adult penguins have been found dead at 13 of the 15 breeding sites on the peninsula during nest checks in the past three weeks.

It is not known what caused their deaths but it was suspected a marine biotoxin eaten by the penguins was the most likely cause.

Yellow-eyed Penguin Trust chairwoman Lala Frazer said it was ''absolutely devastating'' and had all the hallmarks of the 1990 event, when 150 breeding adults were found dead, possibly also because of a biotoxin, but it was not known for sure.

''We're really worried as the population has only just recovered now to being back to a viable population from that episode.''

The trust was also ''afraid it is not over yet'' and could have an even greater impact on the population. The loss of adult breeding birds reduced chick numbers. Department of Conservation ranger Mel Young described the deaths as ''tragic'' as the breeding season had seemed to be one of the best seasons she had seen. There were 181 nests found on Otago Peninsula this season.

Most of the dead penguins, including several juveniles and chicks, had been found near their nests or on pathways to the beach. More were believed to have died at sea or on land but whose bodies had not been found.

''This is quite hard. The adults were in excellent condition.''

About 42 bodies recovered from sites from Blackhead to Aramoana during routine end-of-season chick monitoring had been sent to Massey University for postmortems but results had been inconclusive.

Further testing of the stomach contents of the birds was being undertaken by the university's Wildbase in association with the Cawthron Institute.

It did not appear any other Otago breeding sites had been affected.

The deaths of the adults was doubly tragic as it meant many of this season's chicks had been left without parents to feed them, Ms Young said.

It meant chicks were losing up to 1.5kg in weight and many had been transferred to the penguin hospital at Penguin Place so they could be fed until they were at the optimum weight for releasing.

Contingency plans were being developed by the Department of Conservation and the Yellow-eyed Penguin Trust and would be implemented as soon as the test results became available, she said.

In the meantime, Doc and trust staff and volunteers will continue to monitor breeding sites. They urged anyone who saw distressed or dead penguins to contact Doc.